Reading: The McDonaldization of Society

This McDonald’s storefront in Egypt shows the McDonaldization of society. (Photo courtesy of s_w_ellis/flickr)

The McDonaldization of Society (Ritzer 1993) refers to the increasing presence of the fast food business model in common social institutions. This business model includes efficiency (the division of labor), predictability, calculability, and control (monitoring). For example, in your average chain grocery store, people at the register check out customers while stockers keep the shelves full of goods and deli workers slice meats and cheese to order (efficiency). Whenever you enter a store within that grocery chain, you receive the same type of goods, see the same store organization, and find the same brands at the same prices (predictability). You will find that goods are sold by the pound, so that you can weigh your fruit and vegetable purchase rather than simply guessing at the price for that bag of onions, while the employees use a timecard to calculate their hours and receive overtime pay (calculability). Finally, you will notice that all store employees are wearing a uniform (and usually a name tag) so that they can be easily identified. There are security cameras to monitor the store, and some parts of the store, such as the stockroom, are generally considered off-limits to customers (control). While McDonaldization has resulted in improved profits and an increased availability of various goods and services to more people worldwide, it has also reduced the variety of goods available in the marketplace while rendering available products uniform, generic, and bland. Think of the difference between a mass-produced shoe and one made by a local cobbler, between a chicken from a family-owned farm and a corporate grower, or between a cup of coffee from the local diner and one from Starbucks.

Secrets of the McJob

We often talk about bureaucracies disparagingly, and no organization takes more heat than fast food restaurants. Several books and movies, such as Fast Food Nation: The Dark Side of the All-American Meal by Eric Schossler, paint an ugly picture of what goes in, what goes on, and what comes out of fast food chains. From their environmental impact to their role in the U.S. obesity epidemic, fast food chains are connected to numerous societal ills. Furthermore, working at a fast food restaurant is often disparaged, and even referred to dismissively, as having a McJob rather than a real job.

But business school professor Jerry Newman went undercover and worked behind the counter at seven fast food restaurants to discover what really goes on there. His book, My Secret Life on the McJob, documents his experience. Unlike Schossler, Newman found that these restaurants offer much good alongside the bad. Specifically, he asserted that the employees were honest and hardworking, that management was often impressive, and that the jobs required a lot more skill and effort than most people imagined. In the book, Newman cites a pharmaceutical executive who says a fast-food service job on an applicant’s résumé is a plus because it indicates the employee is reliable and can handle pressure.

Businesses like Chipotle, Panera, and Costco attempt to combat many of the effects of McDonaldization. In fact, Costco is known for paying its employees an average of $20 per hour, or slightly more than $40,000.00 per year. Nearly 90% of their employees receive health insurance from Costco, a number that is unheard of in the retail sector.

While Chipotle is not known for high wages of its employees, it is known for attempting to sell high-quality foods from responsibly sourced providers. This is a different approach from what Schossler describes among burger chains like McDonalds.

So what do you think? Are these McJobs and the organizations that offer them still serving a role in the economy and people’s careers? Or are they dead-end jobs that typify all that is negative about large bureaucracies? Have you ever worked in one? Would you? 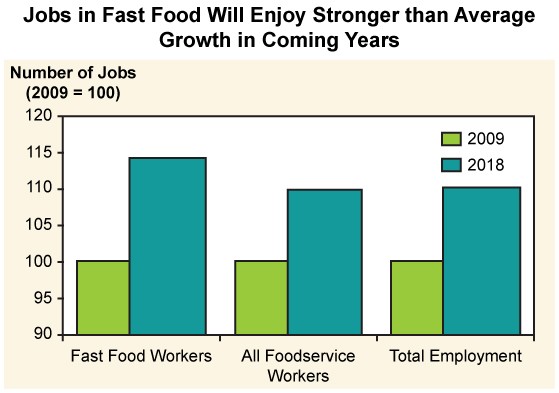 Fast-food jobs are expected to grow more quickly than most industries. (Graph courtesy of U.S. BLS)

What do you think about the recent spotlight on fast food restaurants? Do you think they contribute to society’s ills? Do you believe they provide a needed service? Have you ever worked a job like this? What did you learn?

1. What is an advantage of the McDonaldization of society?

2. What is a disadvantage of the McDonaldization of society?