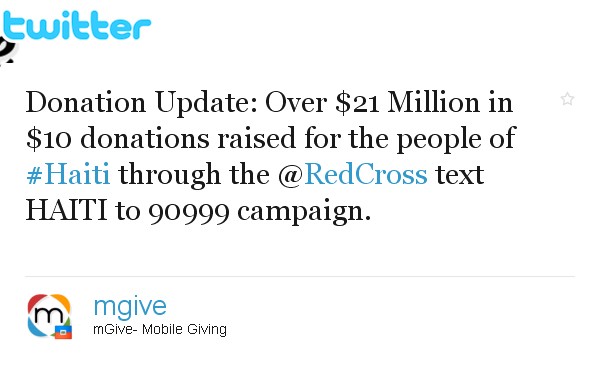 After a devastating earthquake in 2010, Twitter and the Red Cross raised millions for Haiti relief efforts through phone donations alone. (Photo courtesy of Cambodia4KidsOrg/flickr)

Martin Luther King Jr. emerged during these events to become the charismatic leader of the movement, gained respect from elites in the federal government, and aided by even more emerging SMOs such as the Student Non-Violent Coordinating Committee (SNCC), the Congress of Racial Equality (CORE), the National Association for the Advancement of Colored People (NAACP), and the Southern Christian Leadership Conference (SCLC), among others. Several still exist today. Although the movement in that period was an overall success, and laws were changed (even if not attitudes), the “movement” continues. So do struggles to keep the gains that were made, even as the U.S. Supreme Court has recently weakened the Voter Rights Act of 1965, once again making it more difficult for black Americans and other minorities to vote.

New social movement theory, a development of European social scientists in the 1950s and 1960s, attempts to explain the proliferation of postindustrial and postmodern movements that are difficult to analyze using traditional social movement theories. Rather than being one specific theory, it is more of a perspective that revolves around understanding movements as they relate to politics, identity, culture, and social change. Some of these more complex interrelated movements include ecofeminism, which focuses on the patriarchal society as the source of environmental problems, and the transgender rights movement. Sociologist Steven Buechler (2000) suggests that we should be looking at the bigger picture in which these movements arise—shifting to a macro-level, global analysis of social movements.

The early history of marijuana in the United States includes its use as an over-the-counter medicine as well as various industrial applications. Its recreational use eventually became a focus of regulatory concern. Public opinion, swayed by a powerful propaganda campaign by the Federal Bureau of Narcotics in the 1930s, remained firmly opposed to the use of marijuana for decades. In the 1936 church-financed propaganda film “Reefer Madness,” marijuana was portrayed as a dangerous drug that caused insanity and violent behavior.

One reason for the recent shift in public attitudes about marijuana, and the social movement pushing for its decriminalization, is a more-informed understanding of its effects that largely contradict its earlier characterization. The public has also become aware that penalties for possession have been significantly disproportionate along racial lines. U.S. Census and FBI data reveal that blacks in the United States are between two to eight times more likely than whites to be arrested for possession of marijuana (Urbina 2013; Matthews 2013). Further, the resulting incarceration costs and prison overcrowding are causing states to look closely at decriminalization and legalization.

In 2012, marijuana was legalized for recreational purposes in Washington and Colorado through ballot initiatives approved by voters. While it remains a Schedule One controlled substance under federal law, the federal government has indicated that it will not intervene in state decisions to ease marijuana laws.

3. If a movement claims that the best way to reverse climate change is to reduce carbon emissions by outlawing privately owned cars, “outlawing cars” is the ________.