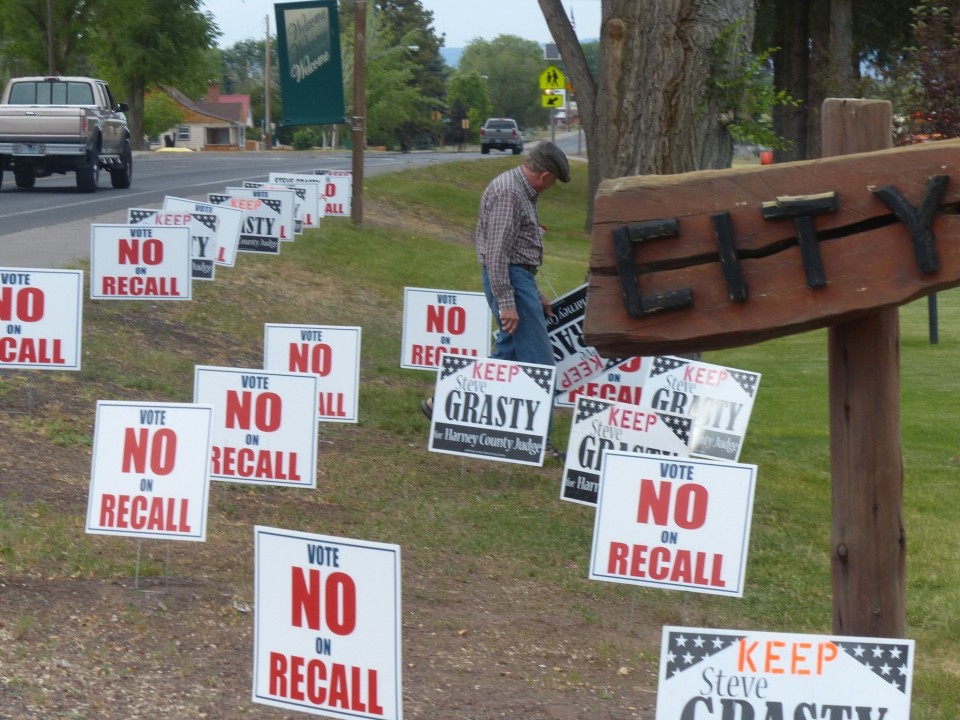 Civic engagement may involve direct action on the part of citizens. Most forms of direct political participation occur at the state level.

To learn more about what type of direct democracy is practiced in your state, visit the University of Southern California’s Initiative & Referendum Institute. This site also allows you to look up initiatives and measures that have appeared on state ballots.

Statewide methods of engagement, similar to direct democracy practices, allow citizens to propose and pass laws that affect state constitutions, state budgets, and more. Most states in the western half of the country allow citizens all forms of direct democracy, while most states on the eastern and southern regions allow few or none of these forms. States that joined the United States after the Civil War are more likely to have direct democracy. 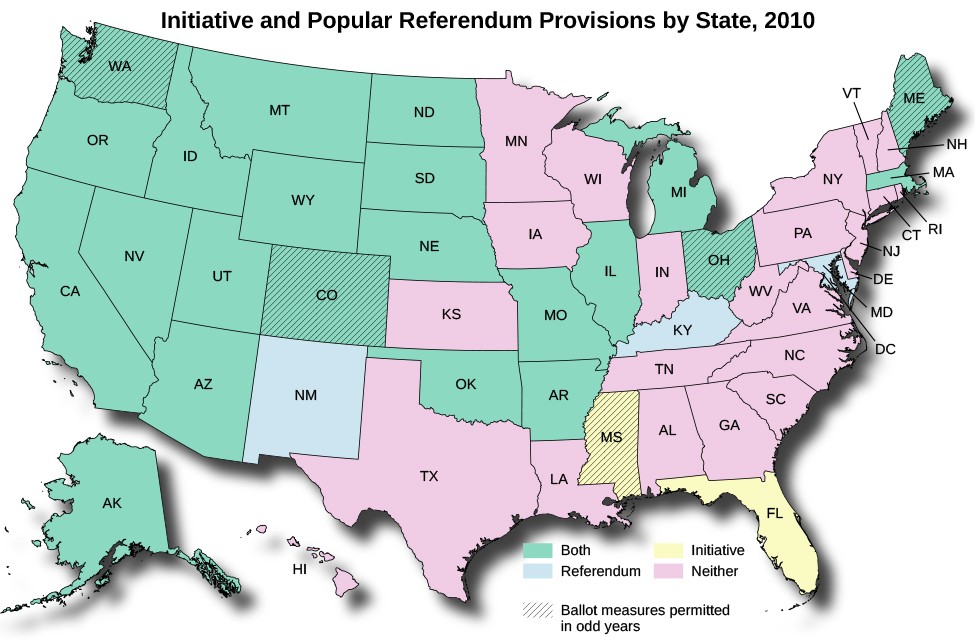 This map shows which states allow citizens to place laws and amendments on the ballot for voter approval or repeal. (Credit: OpenStax included image)

A referendum asks citizens to confirm or repeal a decision made by the government. A legislative referendum occurs when a legislature passes a law or a series of constitutional amendments and presents them to the voters to ratify with a yes or no vote. A judicial appointment to a state supreme court may require voters to confirm whether the judge should remain on the bench. Popular referendums occur when citizens petition to place a referendum on a ballot to repeal legislation enacted by their state government. This form of direct democracy gives citizens a limited amount of power, but it does not allow them to overhaul policy or circumvent the government.

Initiative or proposition is normally a law or constitutional amendment proposed and passed by the citizens of a state. Initiatives completely bypass the legislatures and governor, but they are subject to review by the state courts if they are not consistent with the state or national constitution. The process to pass an initiative is not easy and varies from state to state. Most states require that a petitioner or the organizers supporting an initiative file paperwork with the state and include the proposed text of the initiative. This allows the state or local office to determine whether the measure is legal, as well as estimate the cost of implementing it. This approval may come at the beginning of the process or after organizers have collected signatures. The initiative may be reviewed by the state attorney general, as in Oregon’s procedures, or by another state official or office. In Utah, the lieutenant governor reviews measures to ensure they are constitutional.

Next, organizers gather registered voters’ signatures on a petition. The number of signatures required is often a percentage of the number of votes from a past election. In California, for example, the required numbers are 5 percent (law) and 8 percent (amendment) of the votes in the last gubernatorial election. This means through 2018, it will take 365,880 signatures to place a law on the ballot and 585,407 to place a constitutional amendment on the ballot.[1]

Once the petition has enough signatures from registered voters, it is approved by a state agency or the secretary of state for placement on the ballot. Signatures are verified by the state or a county elections office to ensure the signatures are valid. If the petition is approved, the initiative is then placed on the next ballot, and the organization campaigns to voters.

While the process is relatively clear, each step can take a lot of time and effort. First, most states place a time limit on the signature collection period. Organizations may have only 150 days to collect signatures, as in California, or as long as two years, as in Arizona. For larger states, the time limit may pose a dilemma if the organization is trying to collect more than 500,000 signatures from registered voters. Second, the state may limit who may circulate the petition and collect signatures. Some states, like Colorado, restrict what a signature collector may earn, while Oregon bans payments to signature-collecting groups. And the minimum number of signatures required affects the number of ballot measures. Arizona had more than sixty ballot measures on the 2000 general election ballot, because the state requires so few signatures to get an initiative on the ballot. Oklahomans see far fewer ballot measures because the number of required signatures is higher.

Another consideration is that, as we’ve seen, voters in primaries are more ideological and more likely to research the issues. Measures that are complex or require a lot of research, such as a lend-lease bond or changes in the state’s eminent-domain language, may do better on a primary ballot. Measures that deal with social policy, such as laws preventing animal cruelty, may do better on a general election ballot, when more of the general population comes out to vote. Proponents for the amendments or laws will take this into consideration as they plan.

Finally, the recall allows voters to decide whether to remove a government official from office. All states have ways to remove officials, but removal by voters is less common. The recall of California Governor Gray Davis in 2003 and his replacement by Arnold Schwarzenegger is perhaps one of the more famous such recalls. The recent attempt by voters in Wisconsin to recall Governor Scott Walker show how contentious a recall can be. Walker survived recall.[2]

Politicians are often unwilling to wade into highly political waters if they fear it will harm their chances for reelection. When a legislature refuses to act or change current policy, initiatives allow citizens to take part in the policy process and end the impasse. In Colorado, Amendment 64 allowed the recreational use of marijuana by adults, despite concerns that state law would then conflict with national law. Colorado and Washington’s legalization of recreational marijuana use started a trend, leading to more states adopting similar laws.

Too Much Direct Engagement?

How much direct engagement is too much? When citizens want one policy direction and government prefers another, who should prevail?

Consider recent laws and decisions about marijuana. California was the first state to allow the use of medical marijuana, after the passage of Proposition 215 in 1996. Just a few years later, however, in Gonzales v. Raich (2005), the Supreme Court ruled that the U.S. 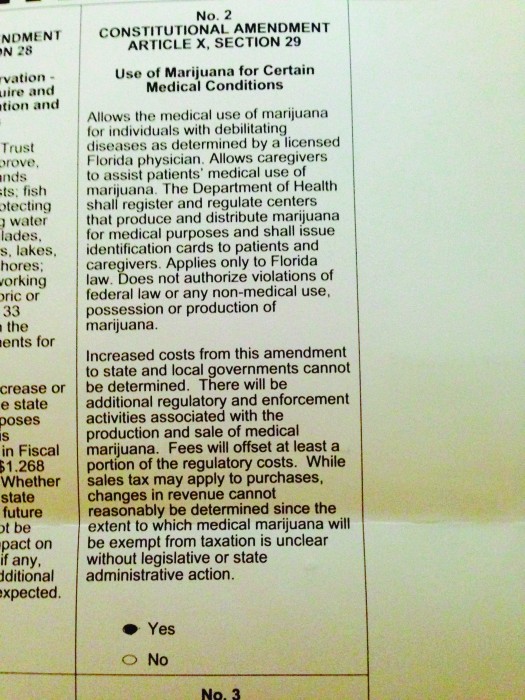 In 2014, Florida voters considered a proposed amendment to the Florida constitution that would allow doctors to recommend the use of marijuana for patient use. The ballot initiative received 58 percent of the vote, just short of the 60 percent required to pass in Florida. (Credit: OpenStax included image)

government had the authority to criminalize the use of marijuana. In 2009, then-Attorney General Eric Holder said the federal government would not seek to prosecute patients using marijuana medically, citing limited resources and other priorities. Perhaps emboldened by the national government’s stance, Colorado voters approved recreational marijuana use in 2012. Since then, other states have followed. Twenty-three states and the District of Columbia now have laws in place that legalize the use of marijuana to varying degrees. In a number of these cases, the decision was made by voters through initiatives and direct democracy.

So where is the problem? First, while citizens of these states believe smoking or consuming marijuana should be legal, the U.S. government does not. The Controlled Substances Act (CSA), passed by Congress in 1970, declares marijuana a dangerous drug and makes its sale a prosecutable act. And despite Holder’s statement, a 2013 memo by James Cole, the deputy attorney general, reminded states that marijuana use is still illegal.[3]

But the federal government cannot enforce the CSA on its own; it relies on the states’ help. And while Congress has decided not to prosecute patients using marijuana for medical reasons, it has not waived the Justice Department’s right to prosecute recreational use.[4]

The states and its citizens are in an interesting position. States have a legal obligation to enforce state laws and the state constitution, yet they also must follow the laws of the United States. Citizens who use marijuana legally in their state are not using it legally in their country. This leads many to question whether initiative, as a form of direct democracy, gives citizens too much power.

Any group can create an organization to spearhead an initiative or referendum. And because the cost of collecting signatures can be high in many states, signature collection may be backed by interest groups or wealthy individuals wishing to use the initiative to pass pet projects. The 2003 recall of California governor Gray Davis faced difficulties during the signature collection phase, but $2 million in donations by Representative Darrell Issa (R-CA) helped the organization attain nearly one million signatures.[5]

Many commentators argued that this example showed direct civic engagement is not always a process by the people, but rather a process used by the wealthy and business.

initiative–law or constitutional amendment proposed and passed by the voters and subject to review by the state courts; also called a proposition