Image of a one dollar bill. (Credit: The U.S. Bureau of Engraving and Printing at the U.S. Department of Treasury; https://www.uscurrency.gov/seven-denominations; The first $1 Federal Reserve note was issued in 1963, and its design—featuring President George Washington and the Great Seal of the United States—remains unchanged)

Even with a carefully planned and orchestrated presidential run, early fundraising is vital for candidates. Money helps them win, and the ability to raise money identifies those who are viable. In fact, the more money a candidate raises, the more he or she will continue to raise. EMILY’s List, a political action group, was founded on this principle; its name is an acronym for “Early Money Is Like Yeast” (it makes the dough rise). This group helps progressive women candidates gain early campaign contributions, which in turn helps them get further donations.

Want to know how much money federal candidates and PACs are raising? Visit the Campaign Finance Disclosure Portal at the Federal Election Commission website. 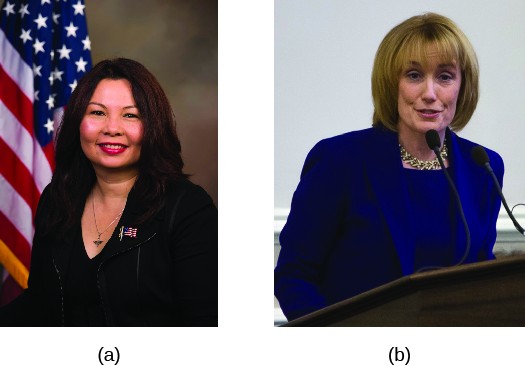 EMILY’s List candidates include members of Congress, such as Tammy Duckworth (D-IL) (a), and governors, such as Maggie Hassan (b) of New Hampshire, who ran successfully for U.S. Senate. (Credit b: modification of work by Roger H. Goun)

Early in the 2016 election season, several candidates had fundraised well ahead of their opponents. Hillary Clinton, Jeb Bush, and Ted Cruz were the top fundraisers by July 2015. Clinton reported $47 million, Cruz with $14 million, and Bush with $11 million in contributions. In comparison, Bobby Jindal and George Pataki (who both dropped out relatively early) each reported less than $1 million in contributions during the same period. Bush later reported over $100 million in contributions, while the other Republican candidates continued to report lower contributions. Media stories about Bush’s fundraising discussed his powerful financial networking, while coverage of the other candidates focused on their lack of money. Donald Trump, the eventual Republican nominee, showed a comparatively low fundraising amount because he was self-funded during most of the nomination campaign.

This, however, pales in comparison to the amounts raised by political action committees (PACs), which are organizations created to raise and spend money to influence politics and contribute to candidates’ campaigns. In the 2014 congressional elections, PACs raised over $1.7 billion to help candidates and political parties.[3] How does the government monitor the vast amounts of money that are now a part of the election process?

The complex problem of funding campaigns has a long history in the United States. For nearly the first hundred years of the republic, there were no federal campaign finance laws. Then, between the late nineteenth century and the start of World War I, Congress pushed through a flurry of reforms intended to bring order to the world of campaign finance. These laws made it illegal for politicians to solicit contributions from civil service workers, made corporate contributions illegal, and required candidates to report their fundraising. As politicians and donors soon discovered, however, these laws were full of loopholes and were easily bypassed by those who knew the ins-and-outs of the system.

While these laws intended to create transparency in campaign funding, government did not have the power to stop the high levels of money entering elections, and little was done to enforce the laws. In 1971, Congress again tried to fix the situation by passing the Federal Election Campaign Act (FECA), which outlined how candidates would report all contributions and expenditures related to their campaigns. The FECA also created rules governing the way organizations and companies could contribute to federal campaigns, which allowed for the creation of political action committees.[4]

Finally, a 1974 amendment to the act created the Federal Election Commission (FEC), which operates independently of government and enforces the elections laws. While some portions of the FECA were ruled unconstitutional by the courts in Buckley v. Valeo (1976), such as limits on personal spending on campaigns by candidates not using federal money, the FEC began enforcing campaign finance laws in 1976.[5]

Even with the new laws and the FEC, money continued to flow into elections. By using loopholes in the laws, political parties and political action committees donated large sums of money to candidates, and new reforms were soon perceived to be needed.

The McCain–Feingold Act limited the use of soft money, which is raised for purposes like party-building efforts, get-out-the-vote efforts, and issue-advocacy ads.[6] Unlike hard money contributed directly to a candidate, which is heavily regulated and limited, soft money has almost no oversight. Soft money was not a problem before the mid-1990s, when a number of very imaginative political operatives developed creative ways to spend this money. After this, soft money donations skyrocketed; however, McCain-Feingold brought some scrutiny and control to this type of fundraising.[7]

McCain-Feingold places limits on total contributions to political parties, prohibits coordination between candidates and PAC campaigns, and requires candidates to include personal endorsements on their political ads.[8] Until 2010, it also limited advertisements run by unions and corporations thirty days before a primary and sixty days before a general election.

Soon after the passage of the McCain-Feingold Act, the FEC’s enforcement of the law spurred court cases challenging it.

A controversial decision handed down by the Supreme Court (2010) is the ruling on Citizens United v. Federal Election Commission led to the removal of spending limits on corporations. Justices in the majority argued that the BCRA violated a corporation’s free speech rights.[9]

The Citizens United case began as a lawsuit against the FEC filed by Citizens United, a non-profit organization that wanted to advertise a documentary critical of former senator and Democratic hopeful Hillary Clinton on the eve of the 2008 Democratic primaries.[10] Advertising or showing the film during this time window was prohibited by the McCain-Feingold Act. The Court found that this type of restriction violated the organization’s First Amendment right to free speech. As critics of the decision predicted at the time, the Court opened the floodgates to private soft money flowing into campaigns again.[11] 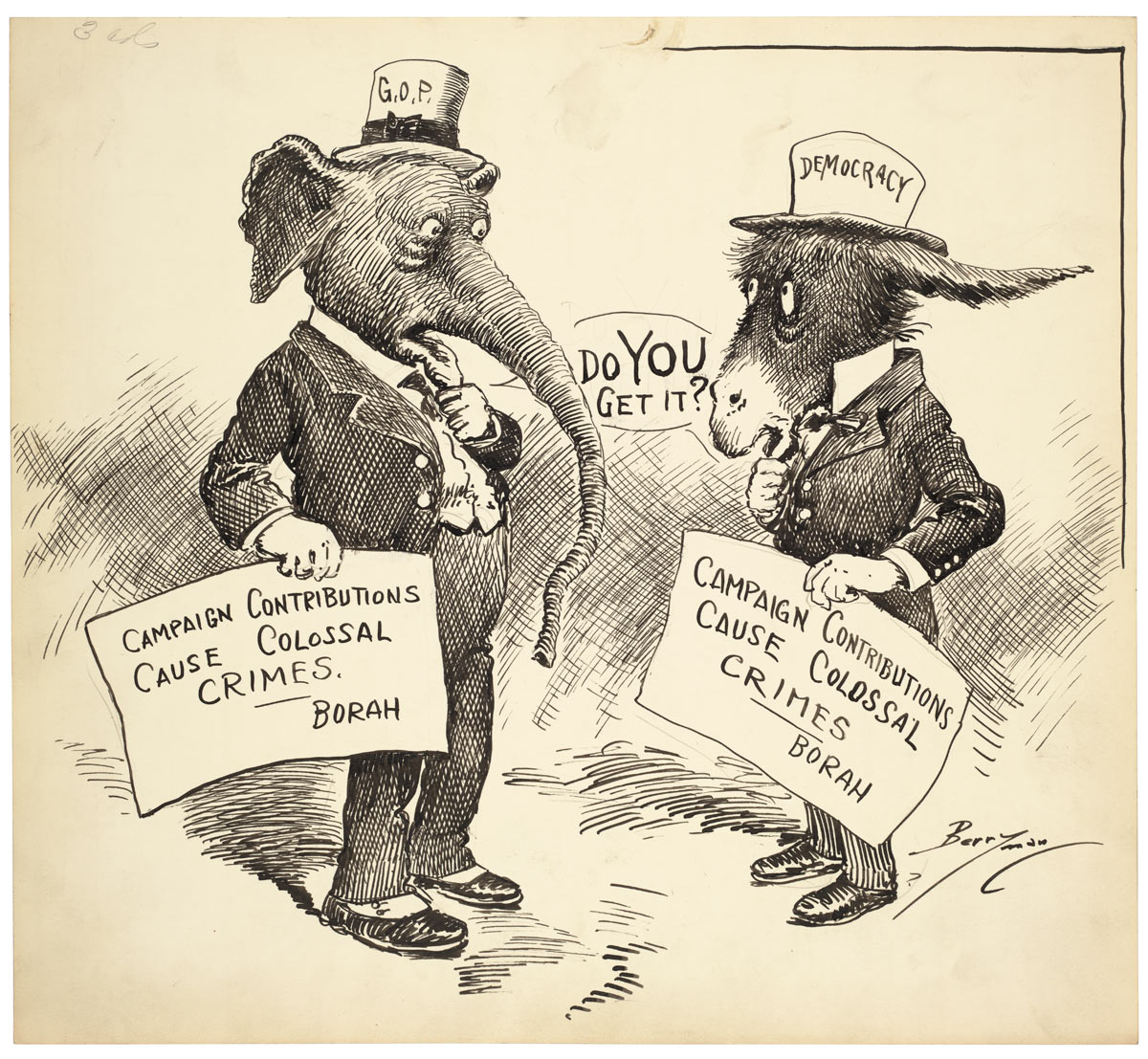 “Campaign Contributions Cause Colossal Crimes” from April 7, 1924.  Campaign contributions and expenditures have historically led to controversy. This cartoon references a speech given by William Borah, a maverick Republican Senator from Idaho, on the Senate’s investigations of corruption in the government and in campaign contributions in particular. Both the Republican elephant and the Democratic donkey are perplexed by Borah’s statements; they ask each other “Do YOU get it?” suggesting that neither of them wants to give up their lucrative campaign fundraising efforts. (Credit: U.S. Senate Collection/Center for Legislative Archives at https://www.archives.gov/exhibits/running-for-office/index.php?page=27)

In the wake of the Court ruling, a new type of advocacy group emerged, the super PACs, or Independent Expenditures-Only Committees. These organizations cannot contribute directly to a candidate, nor can they strategize with a candidate’s campaign. They can, however, raise and spend as much money as they please to support or attack a candidate, including running advertisements and hosting events.[12]

In contrast, a traditional PAC is an organization designed to raise hard money to elect or defeat candidates. Such traditional PACs tended to be run by businesses and other groups, like the Teamsters Union and the National Rifle Association, to support their special interests. They are highly regulated on the amount of money they can take in and spend. Super PACs are not bound by these regulations.

Several limits on campaign contributions have been upheld by the courts and remain in place. Individuals may contribute up to $2,700 per candidate per election. This means a teacher living in Nebraska may contribute $2,700 to Bernie Sanders for his campaign to become to the Democratic presidential nominee, and if Sanders becomes the nominee, the teacher may contribute another $2,700 to his general election campaign. Individuals may also give $5,000 to political action committees and $33,400 to a national party committee. PACs that contribute to more than one candidate are permitted to contribute $5,000 per candidate per election, and up to $15,000 to a national party. PACs created to give money to only one candidate are limited to only $2,700 per candidate, however.[14]

The amounts are adjusted every two years, based on inflation. These limits are intended to create a more equal playing field for the candidates, so that candidates must raise their campaign funds from a broad pool of contributors.

The Center for Responsive Politics reports donation amounts that are required by law to be disclosed to the Federal Elections Commission. One finding is that, counter to conventional wisdom, the vast majority of direct campaign contributions come from individual donors, not from PACs and political parties.

How are Congressional campaigns funded?

Raising this amount of money requires significant time and effort. Indeed, a presentation for incoming Democratic representatives suggested a daily Washington schedule of five hours reaching out to donors and only three or four hours for actual congressional work. As this advice reveals, raising money for reelection constitutes a large proportion of the work a congressperson does. However, overall the largest share of direct campaign contributions in congressional elections comes from individual donors, who are less influential than the political action committees (PACs) that contribute the remainder and demand their time.[16]

hard money–contributed directly to a candidate, which is heavily regulated and limited, soft money has almost no oversight.

super PACs–officially known as Independent Expenditure-Only Committees; organizations that can fund raise and spend as they please to support or attack a candidate but not contribute directly to a candidate or strategize with a candidate’s campaign