Citizen participation in a representative republic matters. As stated earlier, the right of citizens to participate in government is an important principle of representative government. The purpose of voting–and other forms of civic engagement–is to ensure that the government serves the people and not the other way around. The pluralist theory asserts the republic cannot function without active participation by at least some citizens. No matter who we believe makes important political decisions–the majority, special interests, or a group of elites–participation through voting changes those who are in powerful positions of authority.

PATHWAYS TO ENGAGEMENT: How do people get involved?

People can become civically engaged in many ways, either as individuals or as members of groups. Some forms of individual engagement require very little effort. Awareness is the first step toward engagement. Information is available from a variety of reputable media sources, such as newspapers like the Wall Street Journal, The Washington Post, and the New York Times; national news shows, including those offered by the Public Broadcasting Service and National Public Radio; and reputable internet sites.

Representative government cannot work effectively without the participation of informed citizens. Engaged citizens familiarize themselves with the most important issues confronting the country and with plans different candidates have for dealing with these issues. They vote for the candidates they believe will be best suited to the job, and they may join others to raise funds or campaign for those they support.  They inform their representatives how they feel about important issues. Through these efforts and others, engaged citizens let their representatives know what they want and thus influence policy. Only then can government action accurately reflect interests and concerns of the people.

Voting is a fundamental way to engage with government. Individual votes do matter. City council members, local judges, some local law enforcement officials, mayors, state legislators, governors, and members of Congress are all chosen by popular vote. Although the president of the United States is not chosen directly by popular vote but by a group of presidential electors (informally called the Electoral College), the votes of individuals in their home states determine how these electors ultimately vote. 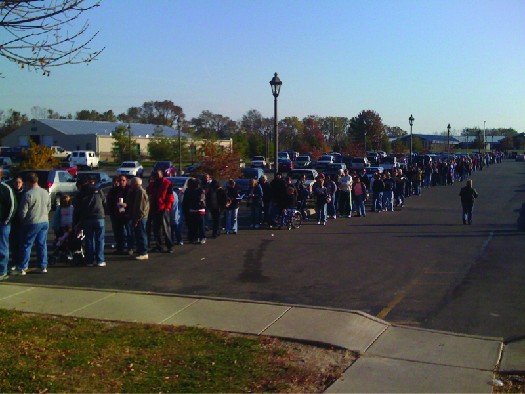 Voters line up to vote early outside an Ohio polling station in 2008. (Credit: Dean Beeler)

Responding to public opinion polls, actively contributing to a political blog, or starting a new blog are all examples of active engagement. Individuals may engage by attending political rallies, donating money to campaigns, and signing petitions.

Starting a petition of one’s own is relatively easy. Some websites connected to various causes and interest groups encourage involvement and provide petitions that can be circulated through email.

Helping people register to vote, making campaign phone calls, and driving voters to the polls on Election Day are all important activities for citizen engagement.

Some people prefer to work with groups when participating in political activities whether these are organized or informal. Group activities can be as simple as hosting a book club or a discussion group to talk about politics. Coffee Party USA provides an online forum for people from a variety of political perspectives to discuss issues of concern to them. 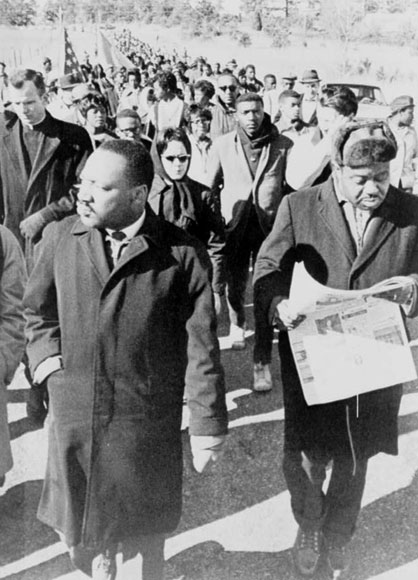 Individual citizens can also join interest groups promoting causes they favor. Civic engagement through organized group activity may increase the power of ordinary people to influence government actions (as seen in the photo at right). Even those without significant wealth or individual connections to influential people may influence the policies affecting their lives and change the direction of government through active participation in organized groups or movements. U.S. history is filled with examples of people actively challenging the existing structure of power, gaining rights for themselves and others, and protecting their interests by mutually working together to advance the causes they believe in.

Organized groups utilize more active and direct forms of engagement including protest marches, demonstrations, and civil disobedience. Such tactics were used successfully in the African American civil rights movement of the 1950s and 1960s and remain effective today. Other tactics, such as boycotting businesses of whose policies the activists disapproved, are also still common practice of many interest groups.

Is There a Decline in Civic Engagement?

Putnam argues that a decline in social capital—“the collective value of all ‘social networks’ [those whom people know] and the inclinations that arise from these networks to do things for each other”—accompanies this decline in membership in small, interactive groups.[3] This decline in social capital has hurt people’s willingness and ability to engage in representative government. If Putnam is correct, this trend is unfortunate, because becoming active in government is important for many reasons. Young Americans are often reluctant to become involved in traditional forms of political activity. They may believe politicians are not interested in what they have to say, or they may feel their votes do not matter. However, this attitude has not always prevailed. Indeed, today’s college students can vote because of the activism of college students in the 1960s. Most states at that time required citizens to be twenty-one years of age before they could vote in national elections. This angered many young people, especially young men who could be drafted to fight the war in Vietnam. They argued that it was unfair to deny eighteen-year-olds the right to vote for the people who had the power to send them to war. As a result, the Twenty-Sixth Amendment, which lowered the voting age in national elections to eighteen, was ratified by the states and went into effect in 1971. 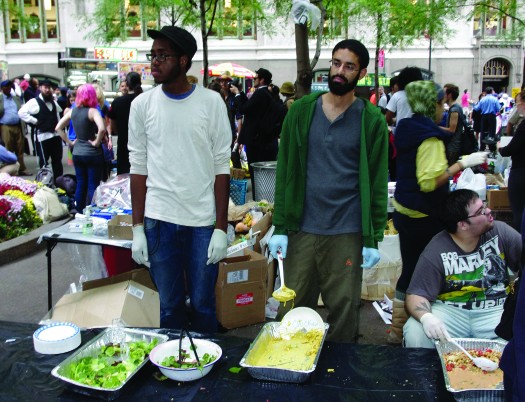 Many Americans engage in political activity on a regular basis. A 2008 survey revealed that approximately two-thirds of American adults had participated in some type of political action in the past year. These activities included largely non-personal activities that did not require significant interaction with others.[4]

Americans aged 18–29 were less likely to become involved in political activity than older Americans. A 2015 poll of more than three thousand young adults by Harvard University’s Institute of Politics revealed that only 22 percent claimed to be politically engaged, and fewer than 10 percent said that they belonged to any type of political organization or had volunteered for a political campaign. Only slightly more claimed they had gone to political rallies.[5] However, although Americans under age thirty are less likely than older Americans to engage in traditional types of political participation, many remain engaged in activities on behalf of their communities. One-third reported that they had voluntarily engaged in some form of community service in the past year.[6] 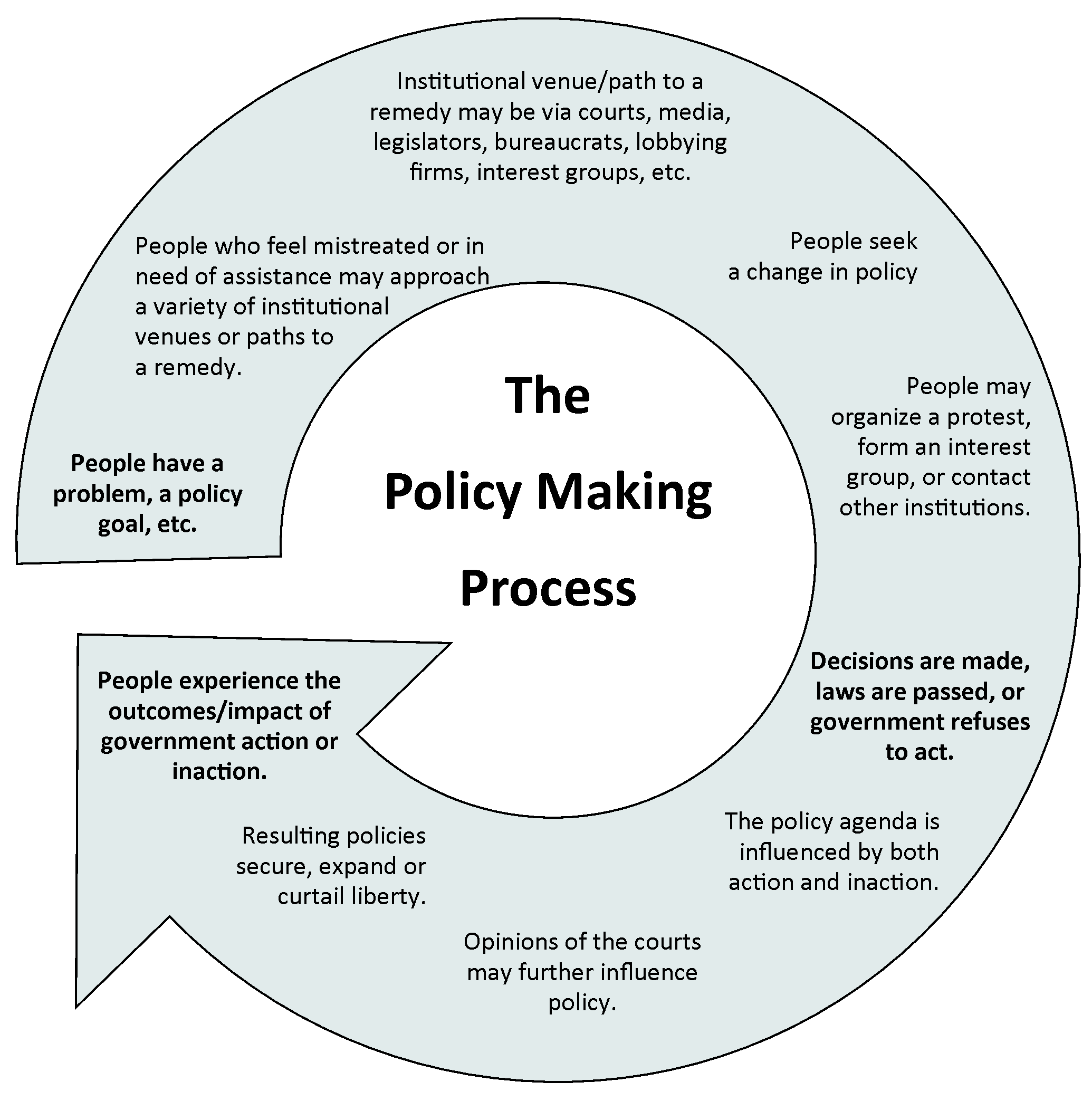 Why are younger Americans less likely to become involved in traditional political organizations and a more traditional policy-making path? One answer may be that as American politics become more partisan in nature, young people turn away. Committed partisanship, which is the tendency to identify with and to support (often blindly) a particular political party, alienates some Americans who feel that elected representatives should vote in support of the nation’s best interests instead of voting in the way their party wishes. When elected officials ignore all factors other than party position on a particular issue, some voters become disheartened while others become polarized. However, a recent study reveals that it is a distrust of the opposing party and not an ideological commitment to their own party that is at the heart of most partisanship among voters.[7]

Young Americans are particularly likely to be put off by partisan politics. More Americans under the age of thirty now identify themselves as Independents instead of Democrats or Republicans. Instead of identifying with a particular political party, young Americans are increasingly concerned about specific issues.[8]

The likelihood that people will become active in politics also depends not only on age but on wealth and education. In a 2006 poll, the percentage of people who reported that they were regular voters grew as levels of income and education increased.[9]

civic engagement/political engagement–citizen involvement with politics/government; being involved in the political process; to ensure the government serves the people and not the other way around