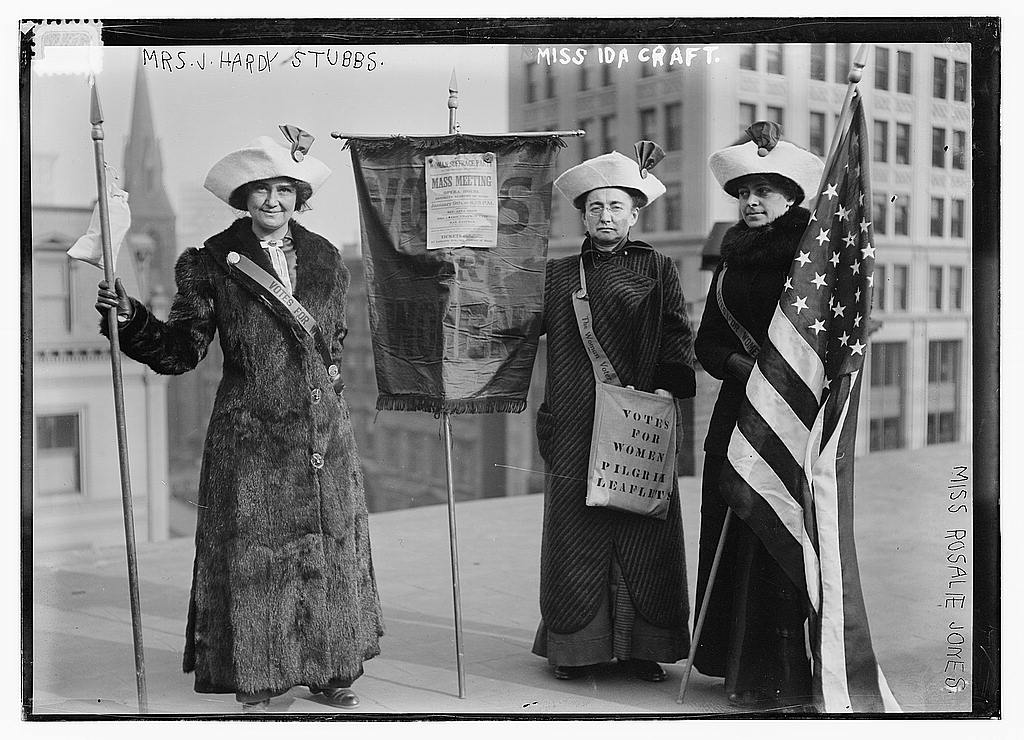 Is participation in the political process encouraged in the U.S.?

Government based upon the consent of the people presupposes citizen participation in the political process. One of the hallmarks of this participation is voting in elections. In fact, voting is clearly a necessary condition–that is, you cannot have a representative republic without voting. However, voting in itself is not sufficient for a government to be called a representative republic or representative democracy. Totalitarian governments frequently allow citizens to vote but without real and meaningful participation in governing. For example, without real opportunity for citizens to express their opinions in an open environment or to join a political party or an organization that opposes the government leaders in power, votes have no impact on the direction of governmental policy. That is to say, voting must be coupled with civil rights and protected liberties that permit meaningful participation through a broad range of opportunities.

All citizens of the U.S. have numerous opportunities open to them for participating in the political processes of our federal structure. From the local level to the national level, citizens may participate in the processes that affect them. Individuals and groups have worked tirelessly in the U.S. to foster expanded opportunities for participation including a major expansion in those permitted to vote and facilitating our voter registration process. However, more work remains to be done to achieve the goals of maximum political equality with inclusive political participation.

Participation in political processes takes many forms from writing a letter petitioning the government for assistance with some problem to marching with a group advocating for a change in government policy. It is obvious that some participatory activities take a much higher initiative on the part of an individual than others. Moreover, some activities are quite normal or conventional methods to influence government policy, while other activities are more atypical or unconventional. That is, while voting or assisting someone with a campaign are fairly conventional, protesting or boycotting products may be less typical and more unconventional. Under the U.S. Constitution and the Bill of Rights, such activities and methods of participation are protected rights of citizens.

Active engagement in civic activities is an important component of democratic ideals and essential in a representative government to achieve responsiveness from our public officials. Participation is all about making opinions known, having opinions heard, and attempting to influence the policy making process. 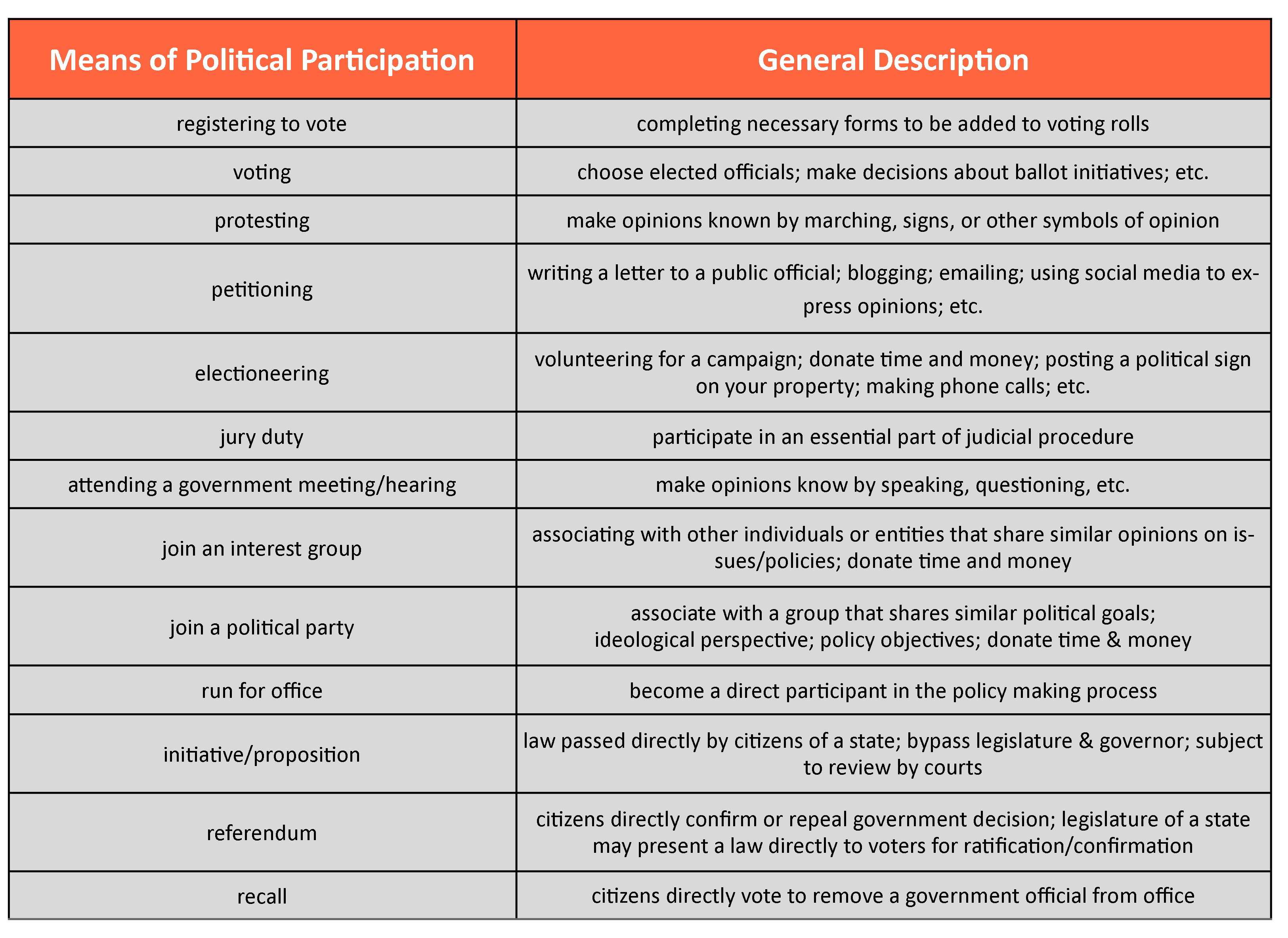 Direct democratic ideals are realized when policy questions go directly to the voters for a decision in referenda. Citizens now use these powers at the ballot to change laws and direct public policy in some states. These decisions include local bond funding for schools or state transportation bonds and policy changes such as constitutional amendments. Not all states allow direct democracy through referenda, nor does the United States government.

In some northeast states, engagement by the people may occur locally, allowing citizens to propose and pass laws that affect local towns. Towns in Massachusetts, for example, may choose to use town meetings, which is a meeting comprised of the town’s eligible voters, to make decisions on budgets, salaries, and local laws.[3]

Running for office can be as easy as collecting one hundred signatures on a city election form or paying a registration fee of several thousand dollars to run for governor of a state. However, a potential candidate needs to meet state-specific requirements covering length of residency, voting status, and age. Potential candidates must also consider competitors, family obligations, and the likelihood of drawing financial backing. His or her spouse, children, work history, health, financial history, and business dealings also become part of the media’s focus, along with many other personal details about the past. Candidates for office are slightly more diverse than the representatives serving in legislative and executive bodies, but the realities of elections drive many eligible and desirable candidates away from running.[4]

Despite these problems, most elections will have at least one candidate per party on the ballot. In states or districts where one party holds a supermajority, such as Georgia, candidates from the other party may be discouraged from running because they do not think they have a chance to win.[5]

Candidates are likely to be moving up from prior elected office or are professionals, like lawyers, who can take time away from work to campaign and serve in office.[6]

When candidates run for office, they are most likely to choose local or state office first. For women, studies have shown that family obligations rather than desire or ambition account for this choice. Further, women are more likely than men to wait until their children are older before entering politics.[7]

Because higher office is often attained only after service in lower office, there are repercussions to women waiting so long. If they do decide to run for the U.S. House of Representatives or Senate, they are often older, and fewer in number, than their male colleagues. Only 24.4 percent of state legislators and 20 percent of U.S. Congress members are women.[8]

The number of women in executive office is often lower as well. 80 percent of members of Congress are male, 90 percent have at least a bachelor’s degree, and their average age is sixty.[9] 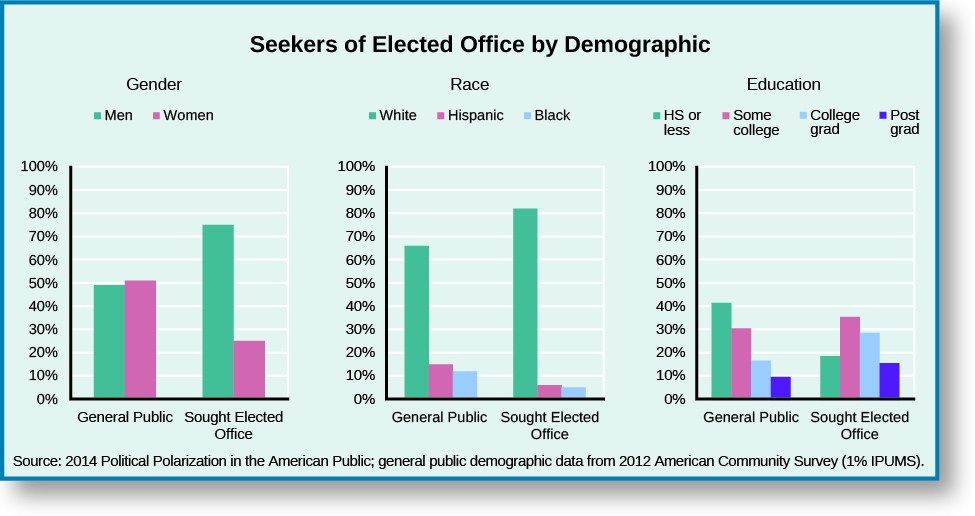 Those who seek elected office do not generally reflect the demographics of the general public: They are often disproportionately male, white, and more educated than the overall U.S. population.

Another factor for potential candidates is whether the seat they are considering is competitive or open. A competitive seat describes a race where a challenger runs against the incumbent—the current office holder. An open seat is one whose incumbent is not running for reelection. But when an incumbent retires, the seat is open and more candidates will run for that seat.

Many potential candidates will also decline to run if their opponent has a lot of money in a campaign war chest. War chests are campaign accounts registered with the Federal Election Commission, and candidates are allowed to keep earlier donations if they intend to run for office again. Incumbents and candidates trying to move from one office to another very often have money in their war chests. Those with early money are hard to beat because they have an easier time showing they are a viable candidate (one likely to win). They can woo potential donors, which brings in more donations and strengthens the campaign. A challenger who does not have money, name recognition, or another way to appear viable will have fewer campaign donations and will be less competitive against the incumbent.

Where and how do women participate in the political process?

This photo shows women marching in national suffrage demonstration, seeking voting rights, in Washington, D.C., May 9, 1914. The suffragists in sashes marching down the street past The Washington Post building were flanked by policemen. 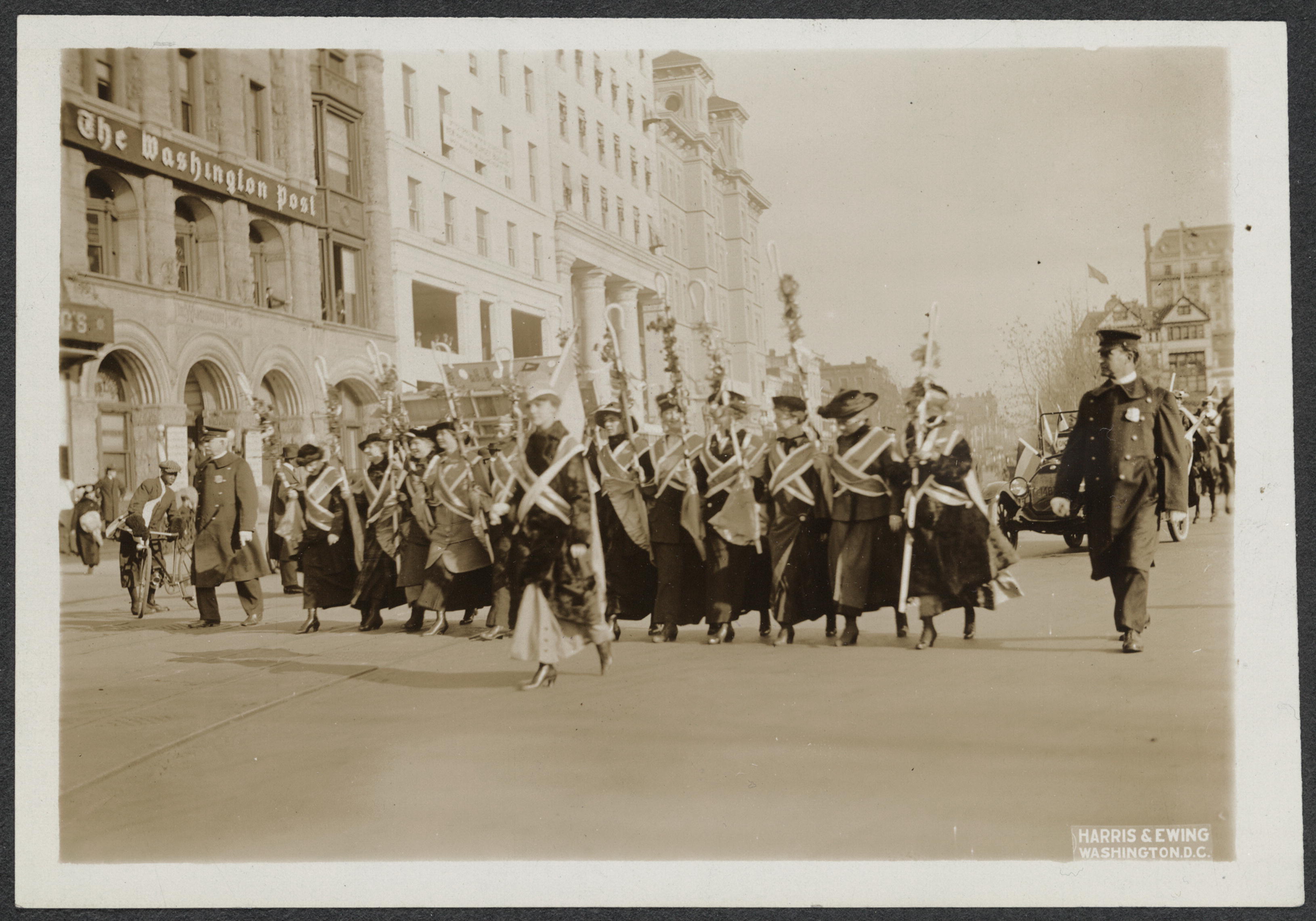 Women are a historically disadvantaged group in the arena of voting, elections, and other forms of political participation. According to the U.S. State Department, women are joining government in growing numbers, holding almost 20 percent of seats in national assemblies worldwide, and serving as heads of government in over 20 countries, including Argentina, Bangladesh, Liberia, and Lithuania. From the Provincial Councils in Afghanistan to the Panchayats in India, women are participating in local governments and building foundations for peace and prosperity in their communities. Women’s political engagement not only increases visibility of women’s leadership abilities, but also leads to social and economic benefits for their communities and countries. For example, Liberian President Ellen Johnson Sirleaf has prioritized women’s empowerment, which has resulted in the inclusion of six women in her Cabinet and the enactment of initiatives focused on distribution of farming equipment to rural women, construction of domestic violence shelters, and credit for women entrepreneurs.[11]Despite this progress, women make up less than 10 percent of the world’s leaders, and globally less than one in five members of national parliaments is a woman. The 30 percent critical mass for women’s representation in national parliaments has been reached in only 28 countries and women are too frequently absent at negotiating tables where constitutions are written and conflicts are resolved. The U.S. Department of State recognizes that democracy cannot flourish without the full participation of all its citizens. Women must be engaged in governance and policy-making – not only because they have a right to be involved in the decisions that directly affect their lives and their communities, but also because their perspectives and experiences improve the outcomes of these deliberations.[12] 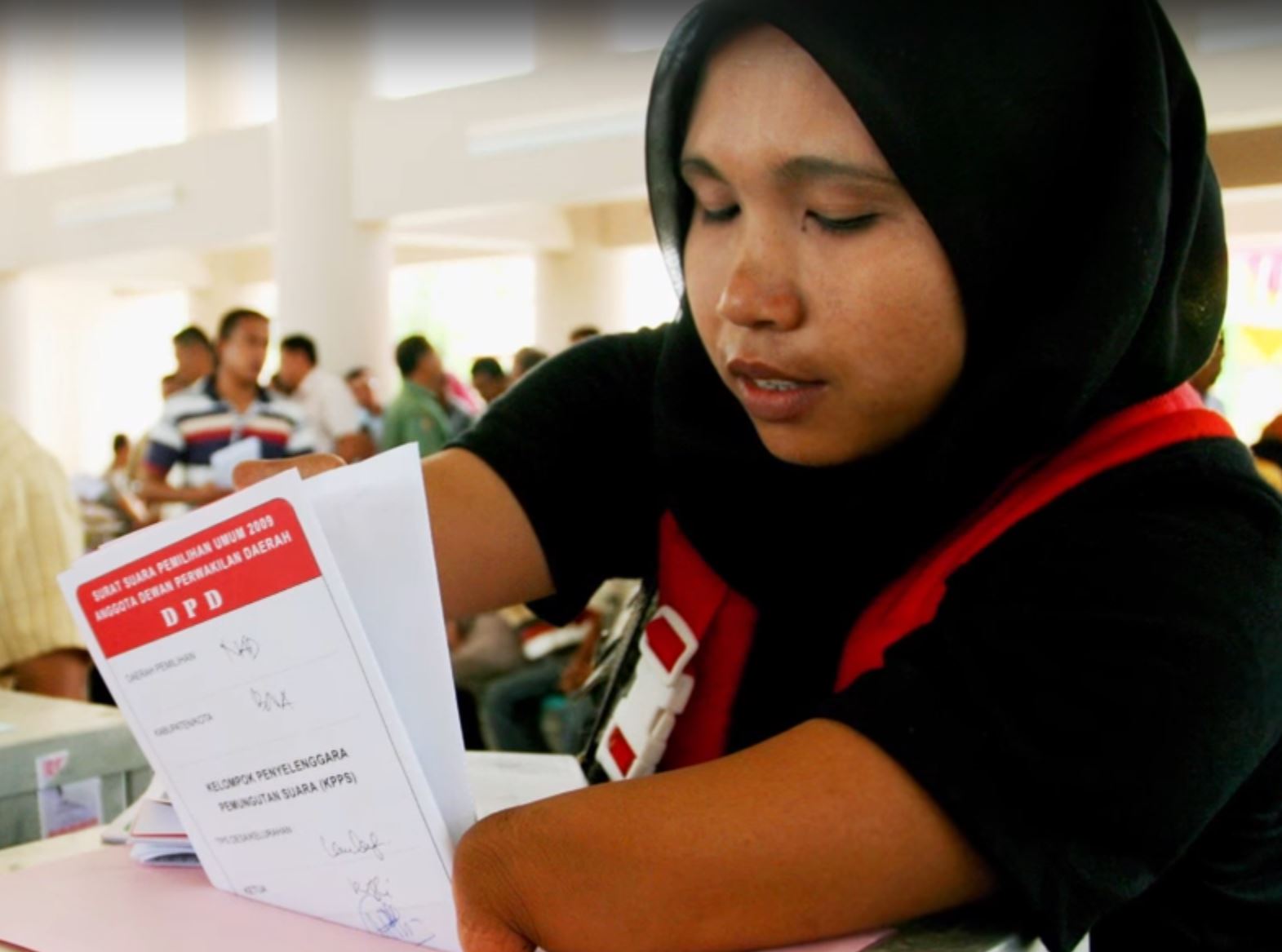 Evidence of the strengthening of women’s rights and political participation around the world. (Credit: USAid)

Women have the right to participate in political processes that affect them, their families, and their societies. Countries with increased women’s participation and leadership in civil society and political parties tend to be more inclusive, responsive, egalitarian, and democratic. When women meaningfully participate in peace processes, they can help to expand the scope of agreements and improve the prospects for durable peace.[13]

Yet, women around the world are still largely absent from national and local decision-making bodies; struggle to have a voice in peace-building transitions; and are excluded from political processes. Despite representing half the global population, women comprise less than 20 percent of the world’s legislators. From discrimination and violence to a lack of support and resources, women face countless challenges to participation in the civic and political life of their countries.[14]

Strengthening women’s rights and addressing barriers to political participation are critical to achieving gender equality and female empowerment. That’s why we’re supporting women around the world by:

competitive seat–race where a challenger runs against the incumbent