Civil Liberties: What does the contract protect? 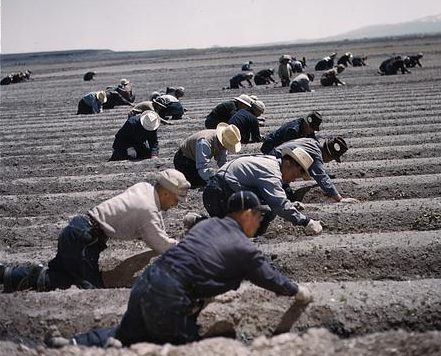 The framers of the Constitution wanted a government that would not repeat the very abuses of individual liberties (basic freedoms possessed by all human beings) and rights (how much freedom ruling authority protects or denies individuals and whether that authority is exercised equitably) that caused them to declare independence from Britain. However, laws and other “parchment barriers” (or written documents) alone have not protected freedoms over the years; instead, citizens have learned the truth of the old saying “Eternal vigilance is the price of liberty”(often attributed to Thomas Jefferson but actually said by Irish politician John Philpot Curran).  Ordinary citizens’ actions are at the core of a vigilant effort to protect constitutional liberties.

An earlier use of this quote, Eternal vigilance is the price of liberty, is from a speech made by the American Abolitionist and liberal activist Wendell Phillips on January 28, 1852.

Speaking to members of the Massachusetts Anti-Slavery Society that day, Phillips said:
Eternal vigilance is the price of liberty; power is ever stealing from the many to the few. The manna of popular liberty must be gathered each day or it is rotten. The living sap of today outgrows the dead rind of yesterday. The hand entrusted with power becomes, either from human depravity or esprit de corps, the necessary enemy of the people. Only by continued oversight can the democrat in office be prevented from hardening into a despot; only by unintermitted agitation can a people be sufficiently awake to principle not to let liberty be smothered in material prosperity.”[2]

If citizens of the United States acknowledge only the laws of the state, people in power can easily curtail civil rights and individual freedoms/civil liberties. Laws of the state, those formed through legislative action or agreement between parties, are positive laws.[3] Generally the term “positive law” connotes statutes, i.e., law enacted by a duly authorized legislature. [2] As used in this sense, positive law is distinguishable from natural law. The term “natural law,” especially as used in legal philosophy, refers to a set of universal principles and rules properly governing moral human conduct. Unlike a statute, natural law is not created by human beings. Rather, natural law is thought to be the preexisting law of nature, which human beings can discover through their capacity for rational analysis or which some human beings understand arises from a higher power.[4]

Natural law or unalienable rights are acknowledged to exist outside the laws of the state. Individuals retain rights to maintain their own life and obtain property by attaching their labor to the acquisition, and they do not receive or obtain such rights from the state. If individuals recognize the state as the grantor of rights, the state may remove rights at the will of those in power.

If citizens acknowledge the government gives them rights, they must also acknowledge the government has the power to remove these rights. If citizens believe they consent to some restrictions on their unalienable/inseparable rights (possessed by them because they are human beings), they consent only to government restrictions on their rights in order to obtain a benefit. Usually a portion of these rights are surrendered to the positive laws enforced by government toward safety and security for the remaining rights. Rights to self-determine driving destinations, times, speeds and methods are surrendered to positive laws established to protect the health and safety of all drivers and pedestrians. 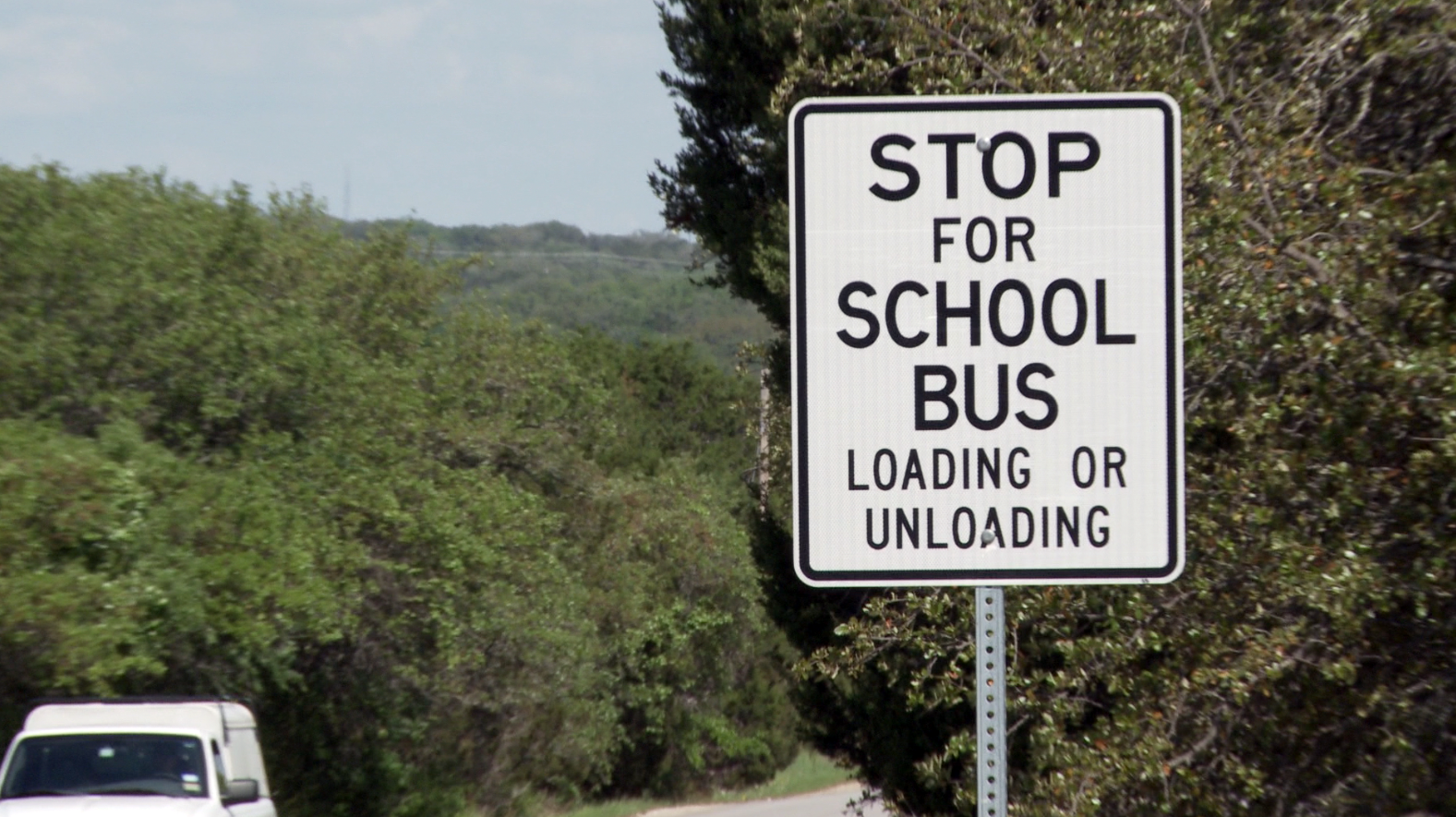 AUSTIN – In conjunction with National School Bus Safety Week (Oct. 20-24), the Texas Department of Public Safety (DPS) is reminding drivers that it is illegal to pass any school bus that is stopped and operating a visual signal – either flashing red lights or a stop sign.

“Children are particularly vulnerable when entering or exiting a school bus, and drivers who refuse to yield to a stopped school bus put our children in harm’s way,” said DPS Director Steven McCraw. During National School Bus Safety Week, troopers in many areas will be riding on or following school buses to catch motorists who disregard the law. Troopers will also be patrolling areas where school buses pick up and drop off students, watching for motorists violating the school bus law. Drivers who violate the law could face fines as much as $1,250.

If a road is divided only by a left-turning lane, drivers on both sides of the roadway must stop for school buses with alternating red flashing lights activated. However, if the lanes are separated by an intervening space or physical barrier, only motorists going in the same direction as the bus are required to stop.[5]

Individuals who apply for a driver’s license and operate a motor vehicle give up their individual freedom to drive at any speed they choose and in any manner they deem appropriate in order to protect the safety of other members of the public.

As previously noted, the Constitution—in particular, the first ten amendments forming the Bill of Rights—protects the liberties and rights of individuals. It does not limit this protection to citizens or adults; in most cases the Constitution simply refers to “persons” which over time has grown to mean that even children, visitors from other countries, and immigrants—permanent or temporary, legal or undocumented—enjoy the same freedoms as adult citizens within the United States or its territories . Neither Japanese tourists visiting Disney World, nor visitors exceeding the limit of days allowed on their visas, sacrifice those liberties. In everyday conversation, we often treat freedoms, liberties, and rights as effectively the same thing, when in fact they are distinct concepts.

Previously, it was noted that civil rights guarantee that government officials will treat people equally and base decisions on the law rather than race, gender, or other personal characteristics.

All people have fundamental rights and liberties was a core argument for independence. In writing the Declaration of Independence in 1776, Thomas Jefferson drew on the ideas of John Locke to express the colonists’ belief in certain inalienable or natural rights that no ruler had the power or authority to deny them. In particular, Jefferson’s words “all men are created equal” became the centerpiece of struggles for the rights of women and minorities.

The writ of habeas corpus demands that a neutral judge decide whether someone has been lawfully detained. Particularly in times of war, or in response to threats against national security, the government has held suspected enemy agents without access to civilian courts.  This is frequently without access to lawyers or a defense, seeking instead to try them before military tribunals or detain them indefinitely without trial.

During World War II, the Roosevelt administration interned Japanese Americans and had other suspected enemy agents—including U.S. citizens—tried by military courts rather than by the civilian justice system, a choice the Supreme Court upheld in Ex parte Quirin.[6]

Following the attacks at Pearl Harbor in 1941, many in the United States feared that Japanese Americans on the West Coast might form a fifth column (a hostile group working from the inside) to aid a Japanese invasion. These fears mingled with existing anti-Japanese sentiment across the country and created a paranoia over the West Coast. To calm fears and prevent any real fifth-column actions, President Franklin D. Roosevelt signed Executive Order 9066, authorizing the removal of people from military areas as necessary. When the military dubbed the entire West Coast a military area, it effectively allowed for the removal of more than 110,000 Japanese Americans from their homes. These people, many of them U.S. citizens, were moved to relocation camps in the nation’s interior for two and a half years.[7] 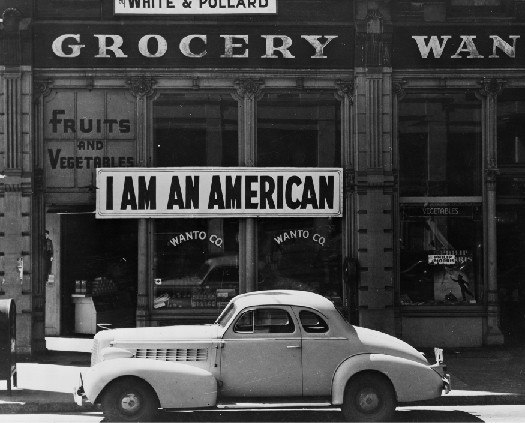 This sign appeared outside a store in Oakland, California, owned by a Japanese American after the bombing of Pearl Harbor in 1941. After the president’s executive order, the store was closed and the owner evacuated to an internment camp for the duration of the war. (Credit: Library of Congress)

The overwhelming majority of Japanese Americans felt shamed by the actions of the Japanese empire and willingly went along with the policy to demonstrate their loyalty to the United States. But at least one Japanese American refused. His name was Fred Korematsu, and he went into hiding in California rather than be taken to the internment camps with his family. He was soon discovered, turned over to the military, and sent to the internment camp in Utah that held his family. But his challenge to the internment system and the president’s executive order continued.

In 1944, Korematsu’s case was heard by the Supreme Court. In a 6–3 decision, the Court ruled against him, arguing that the administration had the constitutional power to sign the order because of the need to protect U.S. interests against the threat of espionage.[8] Forty-four years after this decision, President Reagan issued an official apology for the internment and provided some compensation to the survivors. In 2011, the Justice Department went a step further by filing a notice officially recognizing that the solicitor general of the United States acted in error by arguing to uphold the executive order. (The solicitor general is the official who argues cases for the U.S. government before the Supreme Court.)[9]

In many life situations, civil liberties and civil rights are both affected. The criminal justice system is one such situation. Accused individuals need protection of their civil liberties when their life (threat of death penalty) or liberty (threat of extended incarceration) are at risk. Accused individuals need protection of their civil rights in that all accused individuals deserve to be treated equally by authorities as they move through the process of the justice system. Many examples exist of an accused individual being denied both liberties and rights when they receive assistance from a public defender (a licensed attorney/lawyer the government has employed to represent defendants that are unable to afford to hire their own counsel) who is overworked and can offer no individual attention to their case, while at the same time they often experience a real imbalance in how they are treated by prosecutors because of race or ethnicity. Many groups such as the Southern Poverty Law Center are working to eradicate these imbalances in protecting individual rights and liberties.

“My practice focuses exclusively on representing persons charged with serious crimes or convicted of serious crimes on appeal. A large portion of my practice over the last 15 or 16 years has been devoted to representing persons charged with or sentenced to the death penalty. Those cases I accept on a public defender appointment basis because virtually none of the individuals who are charged with the death penalty throughout the state of Indiana have the funds to hire private counsel.

“There is a perception in [the minority] community that race has played a role in the death penalty charging decision for quite some time. So one of the things that our firm did as part of its representation of [a particular person] was to look at the charging practices by this particular prosecutor to determine if, in fact, our perceptions were accurate.

In the discussion of the Constitution, the Bill of Rights is acknowledged to be designed to protect the freedoms of individuals from interference by government. There is still debate about what these rights entail and how they should be balanced against the interests of others and of society as a whole.

bill of attainder–trial by legislature rather than court system

civil liberties–limitations on the power of government, designed to ensure personal freedoms; basic freedoms possessed by all human beings; right to life, liberty, and property (pursuit of happiness); unalienable rights

civil rights–guarantees of equal treatment by government authorities; how much freedom ruling authority protects or denies individuals and whether that authority is exercised equitably

due process clause–provisions of the Fifth and Fourteenth Amendments that limit government power to deny people “life, liberty, or property” on an unfair basis

natural law–a set of universal principles and rules that properly govern moral human conduct; the preexisting law of nature, which human beings can discover through their capacity for rational analysis

positive law–human made rules and regulations; human agreed upon contracts and constitutions