Public Opinion: What is the connection to political institutions? 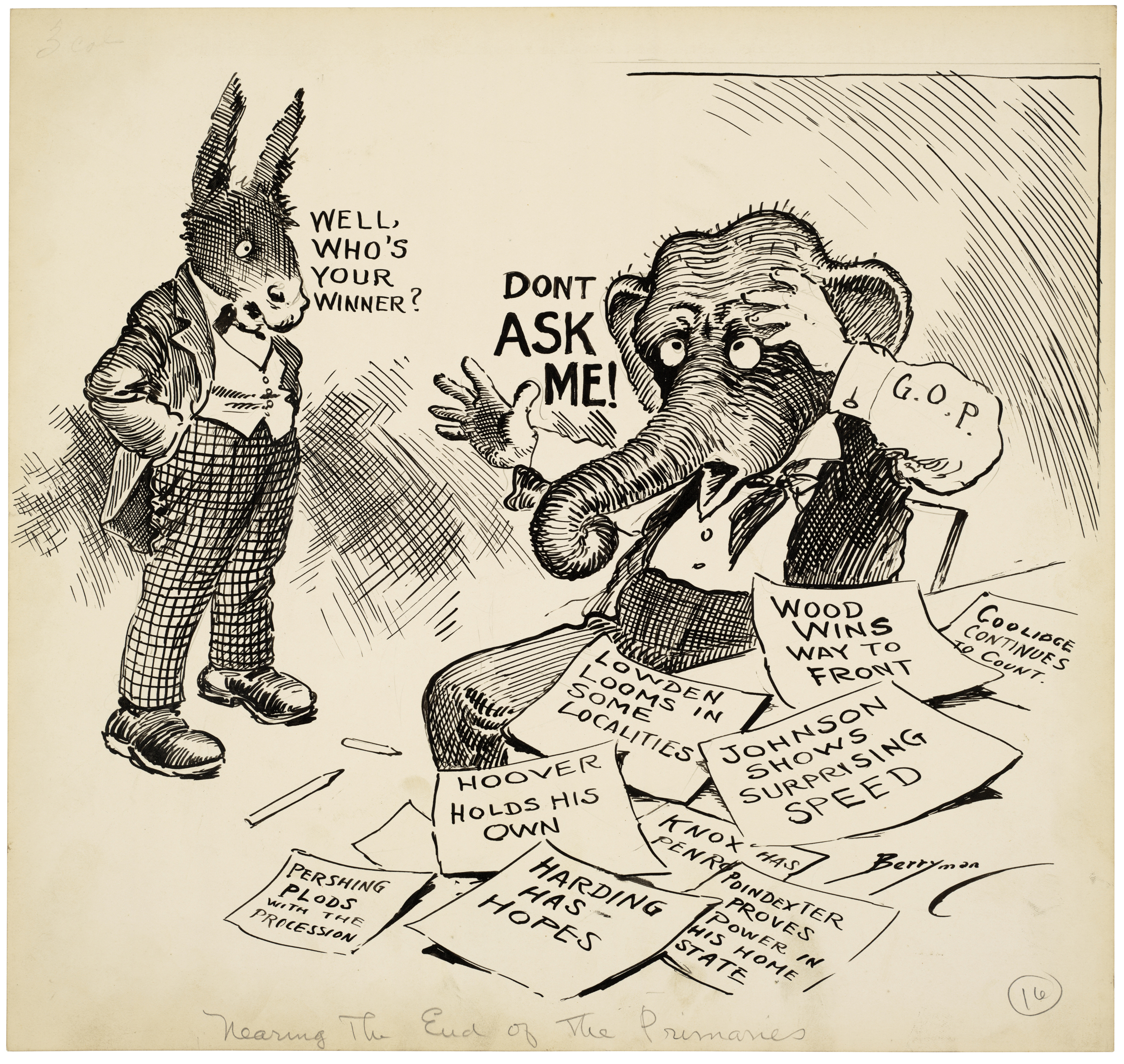 May 3, 1920 This cartoon illustrates the effect of the primary process and the uncertainty of public opinion on choosing nominees for political office. This cartoon shows the frazzled Republican elephant surrounded by conflicting newspaper headlines while the Democratic donkey makes pressing inquiries “Who’s your winner?” (Credit: U.S. Senate Collection Center for Legislative Archives at http://www.archives.gov/exhibits/running-for-office/)

Public opinion about American institutions is measured in public approval ratings rather than in questions of choice between positions or candidates. The congressional and executive branches of government are the subject of much scrutiny and discussed daily in the media. Polling companies take daily approval polls of these two branches. The Supreme Court makes the news less frequently, and approval polls are more likely after the court has released major opinions. All three branches, however, are susceptible to swings in public approval in response to their actions and to national events. Approval ratings are generally not stable for any of the three. We next look at each in turn.

The president is the most visible member of the U.S. government and a lightning rod for disagreement. Presidents are often blamed for the decisions of their administrations and political parties, and are held accountable for economic and foreign policy downturns. For these reasons, they can expect their approval ratings to slowly decline over time, increasing or decreasing slightly with specific events. On average, presidents enjoy a 66 percent approval rating when starting office, but it drops to 53 percent by the end of the first term. Presidents serving a second term average a beginning approval rating of 55.5 percent, which falls to 47 percent by the end of office. President Obama’s presidency has followed the same trend. He entered office with a public approval rating of 67 percent, which fell to 54 percent by the third quarter, dropped to 52 percent after his reelection, and, as of August 2015, sits at 46 percent.

These spikes rarely last more than a few weeks, so presidents try to quickly use the political capital they bring. For example, the 9/11 rally effect helped speed a congressional joint resolution authorizing the president to use troops, and the “global war on terror” became a reality.[2]

The Duration in Office of the Executive
From the New York Packet
Tuesday, March 18, 1788.

To the People of the State of New York:

DURATION in office has been mentioned as the second requisite to the energy of the Executive authority. This has relation to two objects: to the personal firmness of the executive magistrate, in the employment of his constitutional powers; and to the stability of the system of administration which may have been adopted under his auspices. With regard to the first, it must be evident, that the longer the duration in office, the greater will be the probability of obtaining so important an advantage. It is a general principle of human nature, that a man will be interested in whatever he possesses, in proportion to the firmness or precariousness of the tenure by which he holds it; will be less attached to what he holds by a momentary or uncertain title, than to what he enjoys by a durable or certain title; and, of course, will be willing to risk more for the sake of the one, than for the sake of the other. This remark is not less applicable to a political privilege, or honor, or trust, than to any article of ordinary property. The inference from it is, that a man acting in the capacity of chief magistrate, under a consciousness that in a very short time he MUST lay down his office, will be apt to feel himself too little interested in it to hazard any material censure or perplexity, from the independent exertion of his powers, or from encountering the ill-humors, however transient, which may happen to prevail, either in a considerable part of the society itself, or even in a predominant faction in the legislative body. If the case should only be, that he MIGHT lay it down, unless continued by a new choice, and if he should be desirous of being continued, his wishes, conspiring with his fears, would tend still more powerfully to corrupt his integrity, or debase his fortitude. In either case, feebleness and irresolution must be the characteristics of the station.

There are some who would be inclined to regard the servile pliancy of the Executive to a prevailing current, either in the community or in the legislature, as its best recommendation. But such men entertain very crude notions, as well of the purposes for which government was instituted, as of the true means by which the public happiness may be promoted. The republican principle demands that the deliberate sense of the community should govern the conduct of those to whom they intrust the management of their affairs; but it does not require an unqualified complaisance to every sudden breeze of passion, or to every transient impulse which the people may receive from the arts of men, who flatter their prejudices to betray their interests.[3] It is a just observation, that the people commonly INTEND the PUBLIC GOOD. This often applies to their very errors. But their good sense would despise the adulator who should pretend that they always REASON RIGHT about the MEANS of promoting it. They know from experience that they sometimes err; and the wonder is that they so seldom err as they do, beset, as they continually are, by the wiles of parasites and sycophants, by the snares of the ambitious, the avaricious, the desperate, by the artifices of men who possess their confidence more than they deserve it, and of those who seek to possess rather than to deserve it. When occasions present themselves, in which the interests of the people are at variance with their inclinations, it is the duty of the persons whom they have appointed to be the guardians of those interests, to withstand the temporary delusion, in order to give them time and opportunity for more cool and sedate reflection. Instances might be cited in which a conduct of this kind has saved the people from very fatal consequences of their own mistakes, and has procured lasting monuments of their gratitude to the men who had courage and magnanimity enough to serve them at the peril of their displeasure […].[4]

After reading Federalist 71, focus on the statement highlighted in red and give your opinion on whether politicians “flatter” our “prejudices” in order to “betray” our “interests”?

President Kennedy’s approval average was unusually high because his time in office was short; he was assassinated before he could run for reelection, leaving less time for his ratings to decline. Nixon’s unusually low approval ratings reflect several months of media and congressional investigations into his involvement in the Watergate affair, as well as his resignation in the face of likely impeachment.

Congress as an institution has historically received lower approval ratings than presidents, a striking result because individual senators and representatives are generally viewed favorably by their constituents. While congressional representatives almost always win reelection and are liked by their constituents back home, the institution itself is often vilified as representing everything that is wrong with politics and partisanship.

For most of the last forty years, congressional approval levels have bounced between 20 percent and 60 percent, but in the last fifteen years they have regularly fallen below 40 percent. Like President George W. Bush, Congress experienced a short-term jump in approval ratings immediately following 9/11, likely because of the rallying effect of the terrorist attacks. Congressional approval had dropped back below 50 percent by early 2003. 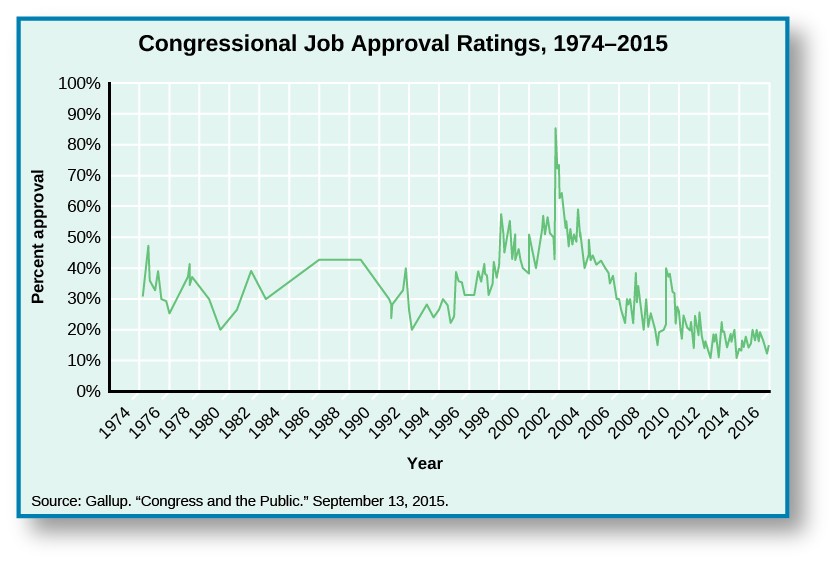 Congressional approval ratings over the past forty years have generally fallen between 20 and 50 percent; however, these ratings spiked to over 80 percent in the wake of the terrorist attacks on September 11, 2001.

While presidents are affected by foreign and domestic events, congressional approval is mainly affected by domestic events. When the economy rebounds or gas prices drop, public approval of Congress tends to go up. But when party politics within Congress becomes a domestic event, public approval falls. The passage of revenue bills has become an example of such an event, because deficits require Congress to make policy decisions before changing the budget. Deficit and debt are not new to the United States. Congress and presidents have attempted various methods of controlling debt, sometimes successfully and sometimes not. In the past three decades alone, however, several prominent examples have shown how party politics make it difficult for Congress to agree on a budget without a fight, and how these fights affect public approval.

The Supreme Court generally enjoys less visibility than the other two branches of government, which leads to more stable but also less frequent polling results. Indeed, 22 percent of citizens surveyed in 2014 had never heard of Chief Justice John Roberts, the head of the Supreme Court.[7]

The court is protected by the justices’ non-elected, non-political positions, which gives them the appearance of integrity and helps the Supreme Court earn higher public approval ratings than presidents and Congress. To compare, between 2000 and 2010, the court’s approval rating bounced between 50 and 60 percent. During this same period, Congress had a 20 to 40 percent approval rating.

The Supreme Court’s approval rating is also less susceptible to the influence of events. Support of and opinions about the court are affected when the justices rule on highly visible cases that are of public interest or other events occur that cause citizens to become aware of the court.[8]

tracking poll–conducting a public opinion poll that is repetitious; example–following the approval ratings of an office holder like the president over an extended period of time