Synovial joints allow the body a tremendous range of movements. Each movement at a synovial joint results from the contraction or relaxation of the muscles that are attached to the bones on either side of the articulation. The type of movement that can be produced at a synovial joint is determined by its structural type. While the ball-and-socket joint gives the greatest range of movement at an individual joint, in other regions of the body, several joints may work together to produce a particular movement. Overall, each type of synovial joint is necessary to provide the body with its great flexibility and mobility. There are many types of movement that can occur at synovial joints (Table 1). Movement types are generally paired, with one being the opposite of the other. Body movements are always described in relation to the anatomical position of the body: upright stance, with upper limbs to the side of body and palms facing forward.

In the limbs, flexion decreases the angle between the bones (bending of the joint), while extension increases the angle and straightens the joint. For the upper limb, all anterior-going motions are flexion and all posterior-going motions are extension. These include anterior-posterior movements of the arm at the shoulder, the forearm at the elbow, the hand at the wrist, and the fingers at the metacarpophalangeal and interphalangeal joints. For the thumb, extension moves the thumb away from the palm of the hand, within the same plane as the palm, while flexion brings the thumb back against the index finger or into the palm. These motions take place at the first carpometacarpal joint. In the lower limb, bringing the thigh forward and upward is flexion at the hip joint, while any posterior-going motion of the thigh is extension. Note that extension of the thigh beyond the anatomical (standing) position is greatly limited by the ligaments that support the hip joint. Knee flexion is the bending of the knee to bring the foot toward the posterior thigh, and extension is the straightening of the knee. Flexion and extension movements are seen at the hinge, condyloid, saddle, and ball-and-socket joints of the limbs (see Figure 1). 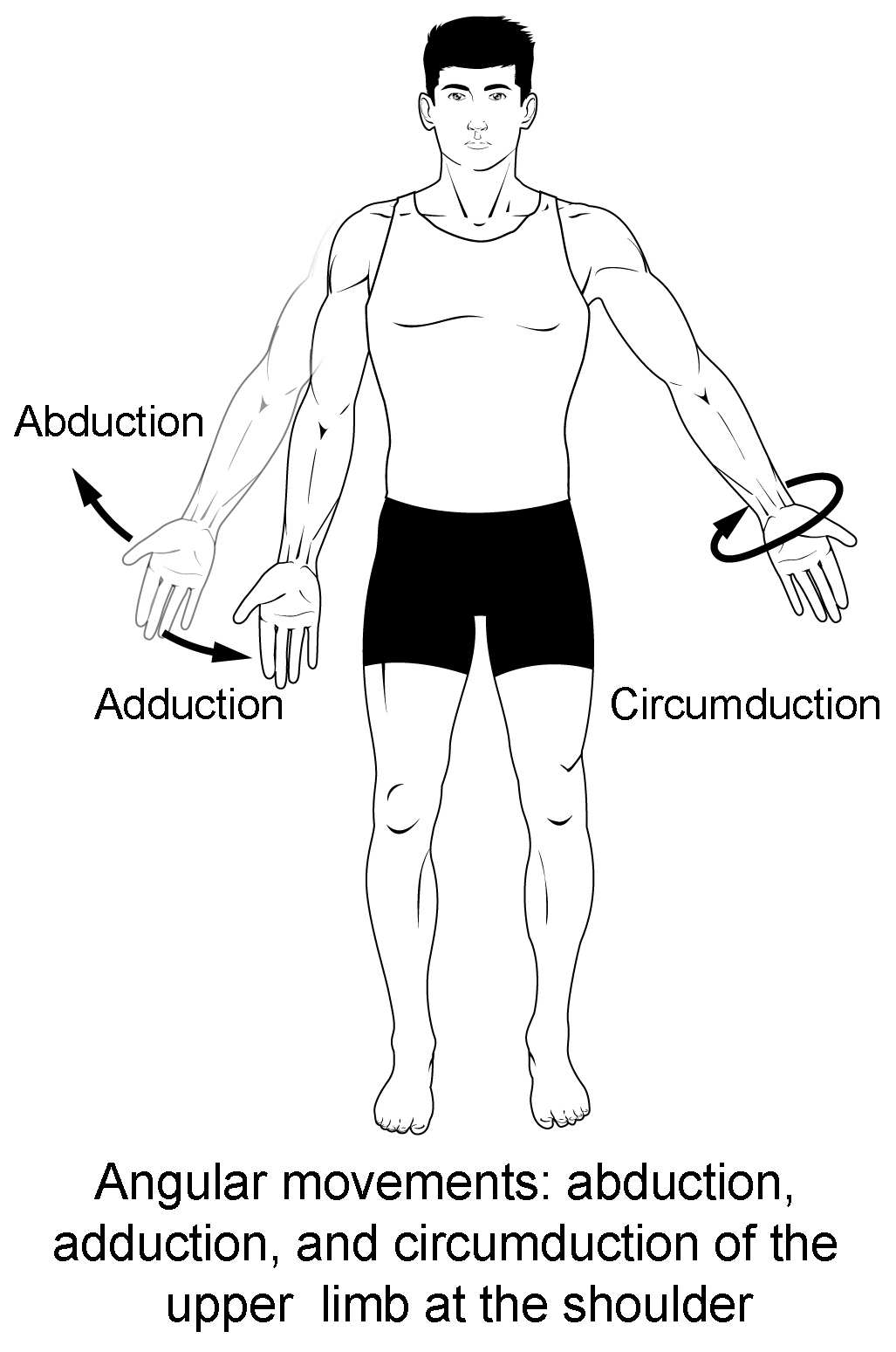 Abduction and adduction are motions of the limbs, hand, fingers, or toes in the coronal (medial–lateral) plane of movement. Moving the limb or hand laterally away from the body, or spreading the fingers or toes, is abduction. Adduction brings the limb or hand toward or across the midline of the body, or brings the fingers or toes together. Circumduction is the movement of the limb, hand, or fingers in a circular pattern, using the sequential combination of flexion, adduction, extension, and abduction motions.

Abduction and adduction motions occur within the coronal plane and involve medial-lateral motions of the limbs, fingers, toes, or thumb. Abduction moves the limb laterally away from the midline of the body, while adduction is the opposing movement that brings the limb toward the body or across the midline. For example, abduction is raising the arm at the shoulder joint, moving it laterally away from the body, while adduction brings the arm down to the side of the body. Similarly, abduction and adduction at the wrist moves the hand away from or toward the midline of the body. Spreading the fingers or toes apart is also abduction, while bringing the fingers or toes together is adduction. For the thumb, abduction is the anterior movement that brings the thumb to a 90° perpendicular position, pointing straight out from the palm. Adduction moves the thumb back to the anatomical position, next to the index finger. Abduction and adduction movements are seen at condyloid, saddle, and ball-and-socket joints (see Figure 2).

Circumduction is the movement of a body region in a circular manner, in which one end of the body region being moved stays relatively stationary while the other end describes a circle. It involves the sequential combination of flexion, adduction, extension, and abduction at a joint. This type of motion is found at biaxial condyloid and saddle joints, and at multiaxial ball-and-sockets joints (see Figure 2). 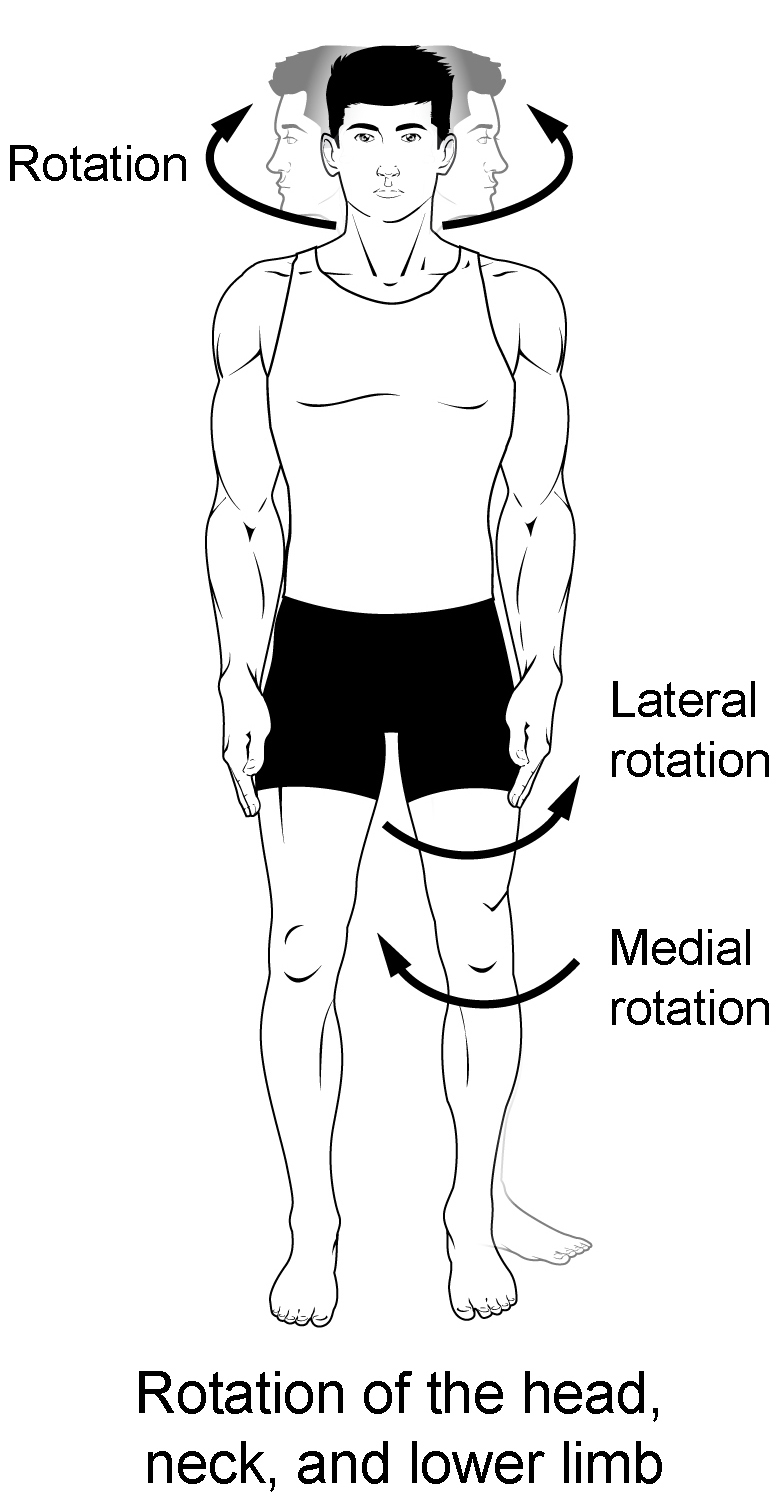 Rotation can also occur at the ball-and-socket joints of the shoulder and hip. Here, the humerus and femur rotate around their long axis, which moves the anterior surface of the arm or thigh either toward or away from the midline of the body. Movement that brings the anterior surface of the limb toward the midline of the body is called medial (internal) rotation. Conversely, rotation of the limb so that the anterior surface moves away from the midline is lateral (external) rotation (see Figure 3). Be sure to distinguish medial and lateral rotation, which can only occur at the multiaxial shoulder and hip joints, from circumduction, which can occur at either biaxial or multiaxial joints. 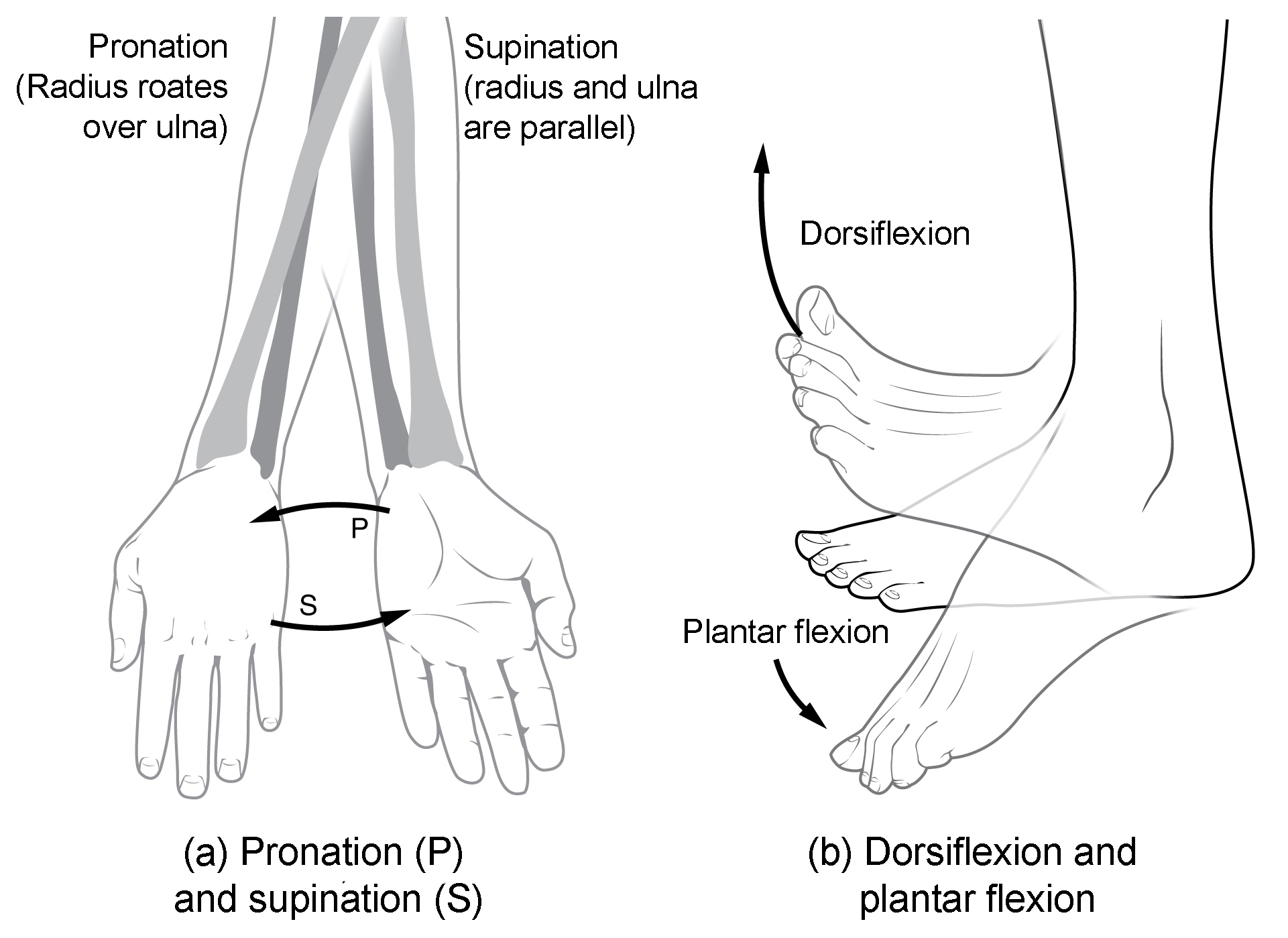 Figure 4. Supination and pronation. (a) Supination of the forearm turns the hand to the palm forward position in which the radius and ulna are parallel, while forearm pronation turns the hand to the palm backward position in which the radius crosses over the ulna to form an “X.” (b) Dorsiflexion of the foot at the ankle joint moves the top of the foot toward the leg, while plantar flexion lifts the heel and points the toes.

Inversion and eversion are complex movements that involve the multiple plane joints among the tarsal bones of the posterior foot (intertarsal joints) and thus are not motions that take place at the ankle joint. Inversion is the turning of the foot to angle the bottom of the foot toward the midline, while eversion turns the bottom of the foot away from the midline. The foot has a greater range of inversion than eversion motion. These are important motions that help to stabilize the foot when walking or running on an uneven surface and aid in the quick side-to-side changes in direction used during active sports such as basketball, racquetball, or soccer (see Figure 5). 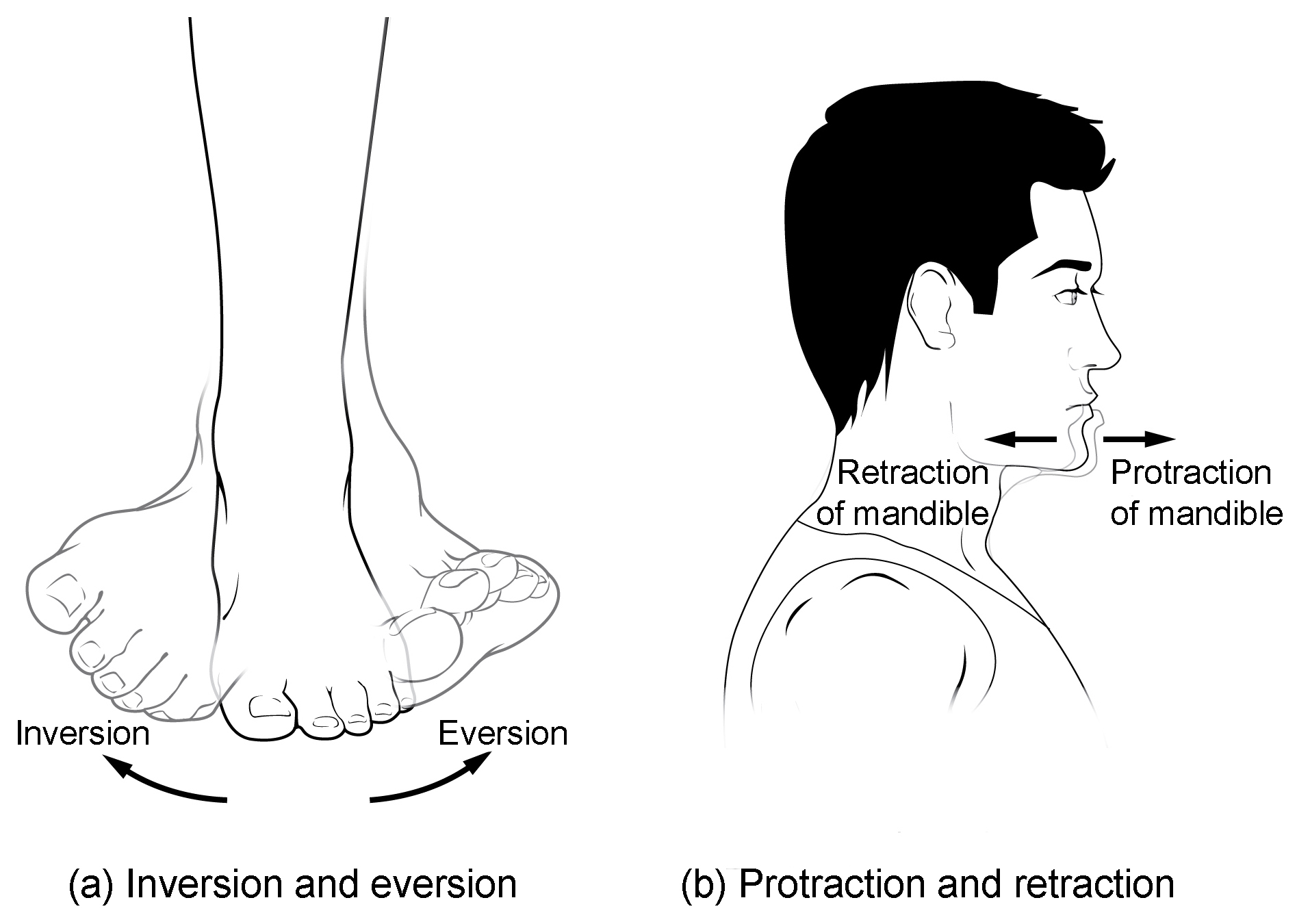 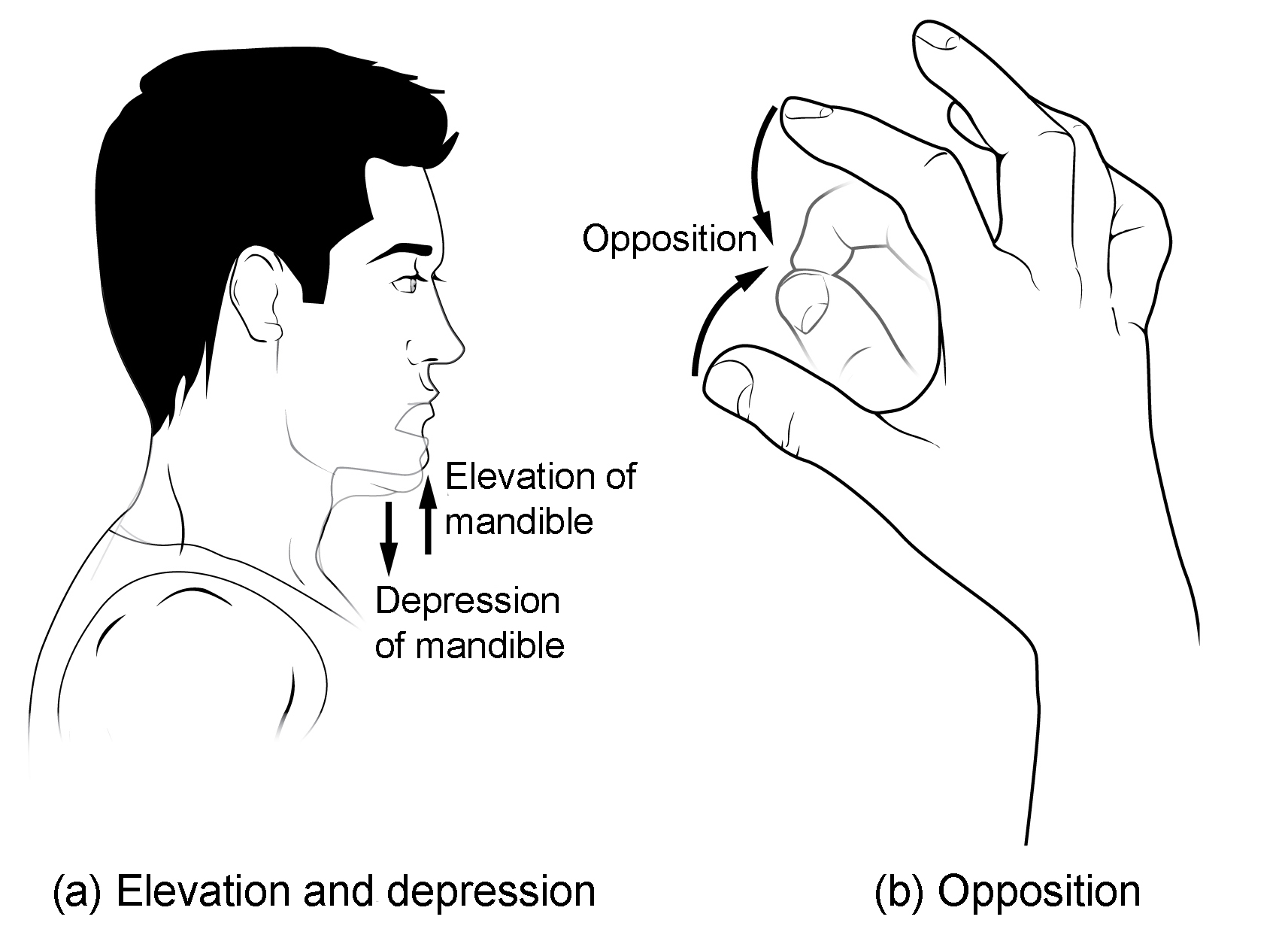 Opposition is the thumb movement that brings the tip of the thumb in contact with the tip of a finger. This movement is produced at the first carpometacarpal joint, which is a saddle joint formed between the trapezium carpal bone and the first metacarpal bone. Thumb opposition is produced by a combination of flexion and abduction of the thumb at this joint. Returning the thumb to its anatomical position next to the index finger is called reposition (see Figure 6).