Nervous tissue is the last of the four major categories of animal tissue. Nervous tissue comprises neurons, the cells specialized for the propagation of electrochemical signals, and neuroglia, the so-called “supporting cells” of nervous tissue. There are multiple types of neuroglia cells (sometimes called just glial cells), and most of them do assist neurons, but recent research has discovered that some of the neuroglia cells play an active role by themselves in the proper functioning of the central and peripheral nervous systems. It is turning out that neuroglia do more than just support neurons.

We will leave investigation of the neuroglia for later labs. In this lab, we will just focus on the structural features of neurons as they are visible under microscopic examination. 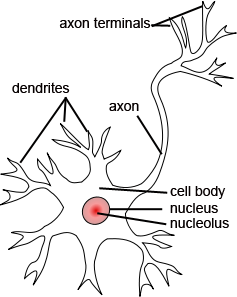 All of these features are important to the functioning of neurons. The cell body is where most of the cellular processes of the neuron take place: protein synthesis, metabolism, etc. The dendrites contact and pick up signals coming in from other cells (other neurons or sensory cells). The axon propagates the neuron’s electrical signal to its various targets. And the axon terminals actually contact (synapse with) those targets and send chemical signals to the targets to trigger changes in them. However, most neurons in the body do not look as clear-cut as the neuron in Figure 5.8. Some neurons have short axons. Others have dendrites that are almost as large as the axon. Others have two axons connected to the same cell body. Many have dendrites and axon terminals that are too thin and small too see clearly. Cell bodies tend to come in all sorts of sizes and shapes, and are not always bulbous lumps readily distinguished from the rest of the cell.

What’s more, nervous tissue is delicate and fragile. In creating preparations for slides to viewed under a microscope, some of the cells are smushed together, damaged, truncated, or torn. Other times, the nervous tissue cells are simply too densely packed together to make out individual details. Much of what is visible is not useful to the student looking to find an intact and well-defined neuron. However, a bit of searching will often reveal some intact neurons. Often these are found at the edges of the preparation where the material is least dense. Keep in mind, you will often see neurons shaped distinctly different from those shown in textbooks and if Figure 5.8.

Figure 5.9 shows two different locations in the same slide. Figure 5.9 A shows a mass of neurons (stained black) in which it is difficult to distinguish the shape of even one neuron clearly. Figure 5.9B shows a different area from the same slide, where the neurons are not so crowded, and where one neuron in particular (outlined in red) shows many of the structures we are interested in. So, keep in mind, it is important to know what you want to find in a particular slide, and it is important to search around the slide to find the best example of what you are looking for.

Figure 5-9 Two different areas from the same slide of a nervous tissue preparation. In A, the neurons are too crowded to see any one neuron clearly. In B, the neuron outlined in yellow illustrates a typical dendrite-cell body-axon arrangement. 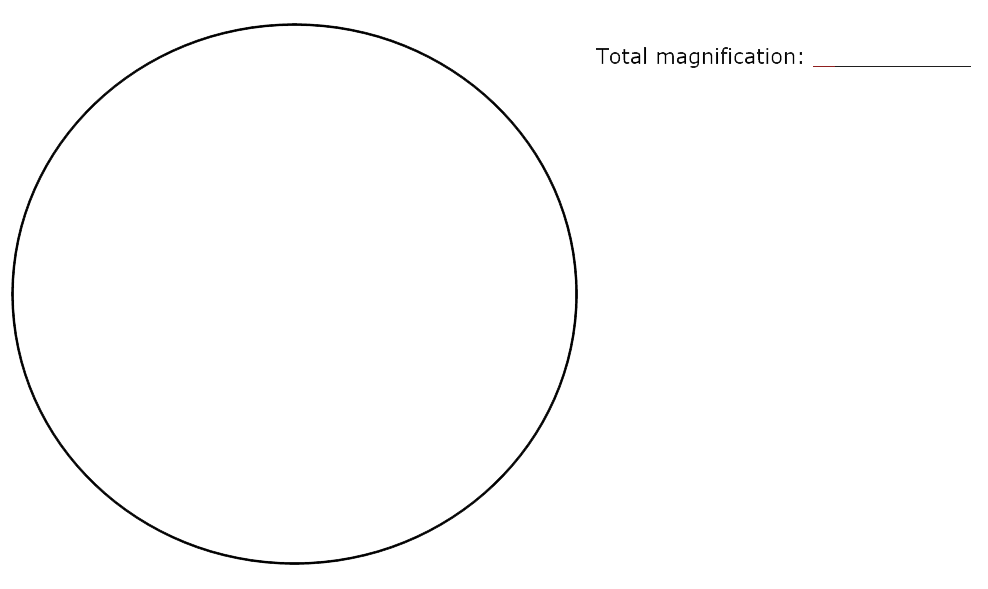