There is a pectoral girdle above each arm, consisting of the scapula (shoulder blade) and clavicle (collar bone.)

Figure 7-5. The pectoral girdle. The scapulae are in green and the clavicles are in blue.

The scapula has a triangular body with three main processes coming off the body. On the posterior side is the spine of the scapula that ends in the acromion process, which articulates with the lateral end of the scapula. On the anterior side, facing into the body, is a right-angled process called the coracoid process. While at the superior lateral edge of the scapula the glenoid cavity, which serves as the socket for the head of the humerus bone. The glenoid cavity always points laterally, while the spine and acromion are posterior. This will help you determine whether a particular scapula comes from the anatomical left or right. 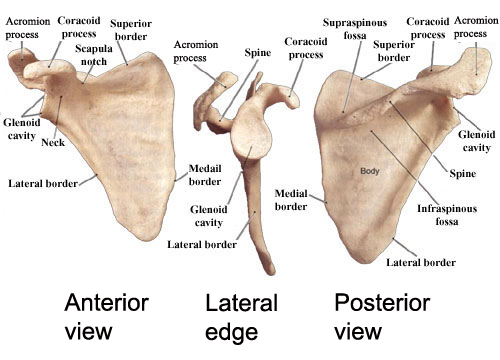