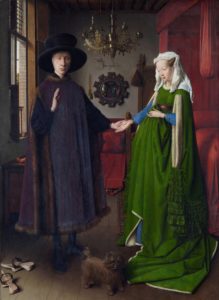 If you took notice of a mini lecture that was included in our module, you would have learned little. It was blank.

One problem is that the mini semester is too short to cover a topic as large as the Italian Renaissance, or Dutch painting in the time of Rembrandt, or why Impressionists in the 19th century changed art forever, or why Pablo Picasso’s paintings in the early 20th century were revolutionary,  or how contemporary artists are using art to deal with race; and gender issues.

Each module takes one issue, that is representative of the time that we are looking at. Michelangelo is at the center of the Italian “High Renaissance”, so we take a group of sculptures with the same theme to see the changes that took place in his mind, and the “mind” of Italy from the early, to middle 16th century.

A big issue becomes, what about the great Leonardo, or Raphael, or earlier renaissance masters like Donatello, or Botticelli?

Many colleges have an entire semester just on the Italian renaissance, with each important artist covered in great depth. In the mini semester, students would be overwhelmed with having to study each artist in such an artist rich time.

In will opt for a few artists, and or a few concepts, which I hope will stick in the minds way after you finish the course.

One of those concepts is Iconography.  In the painting above, we see what is widely thought to be a marriage of a wealthy banker in Northern Europe, in the early 15th century. The artist is one of the great early renaissance painters, and one of the early artists to use oil paints.

His name is Jan Van Eyck, and his art influenced many renaissance artists, such as Leonardo da Vinci. Earlier paintings used colors mixed into eggs, and each stroke dried quickly, so blending effects of light was a difficult task.

In the painting of the vows being taken by the man and his wife, there are many things in the room that have meaning. We call that iconography.

If you see that the bride and groom have taken their sandals off, his in front, and hers in the background. The meaning of this is the very old idea that you take your shoes off as you are standing on holy ground.

The idea being shown here, is of the marriage vows being watched by God. If you look closely in the mirror reflecting the room’s interior, you will see a minister, and the artist himself.

There are other symbolic ideas inn the room. There is only one candle lit that suggests that the two individuals are becoming one. Even the dog suggests that loyalty will be part of this union.

The oranges near the window might suggest that the marriage will be fruitful. There is a carving on the bed of the patron saint of child birth, and the bride even looks pregnant.

Van Eyck uses linear perspective to create a real space for the two people to stand in. And the light and shadows throughout the room creates a new level of reality, that suggests the real observable world.

This is an important element of renaissance art, that artists are showing the real world in their paintings and sculptures.