Stars from Adolescence to Old Age

Checking Out the Theory

In the previous section, we indicated that that open clusters are younger than globular clusters, and associations are typically even younger. In this section, we will show how we determine the ages of these star clusters. The key observation is that the stars in these different types of clusters are found in different places in the H–R diagram, and we can use their locations in the diagram in combination with theoretical calculations to estimate how long they have lived.

What does theory predict for the H–R diagram of a cluster whose stars have recently condensed from an interstellar cloud? Remember that at every stage of evolution, massive stars evolve more quickly than their lower-mass counterparts. After a few million years (“recently” for astronomers), the most massive stars should have completed their contraction phase and be on the main sequence, while the less massive ones should be off to the right, still on their way to the main sequence. These ideas are illustrated in Figure 1, which shows the H–R diagram calculated by R. Kippenhahn and his associates at Munich University for a hypothetical cluster with an age of 3 million years. 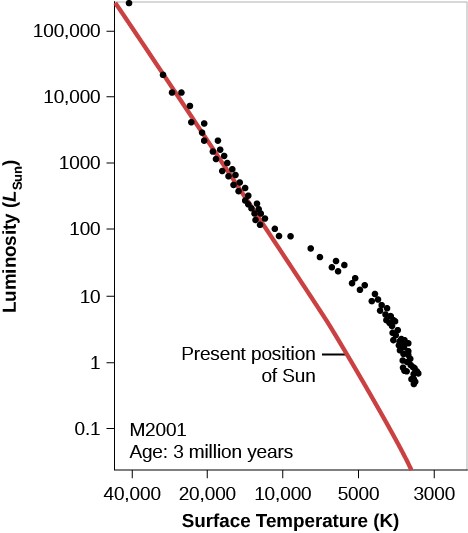 Figure 1. Young Cluster H–R Diagram: We see an H–R diagram for a hypothetical young cluster with an age of 3 million years. Note that the high-mass (high-luminosity) stars have already arrived at the main-sequence stage of their lives, while the lower-mass (lower-luminosity) stars are still contracting toward the zero-age main sequence (the red line) and are not yet hot enough to derive all of their energy from the fusion of hydrogen.

There are real star clusters that fit this description. The first to be studied (in about 1950) was NGC 2264, which is still associated with the region of gas and dust from which it was born (Figure 2). 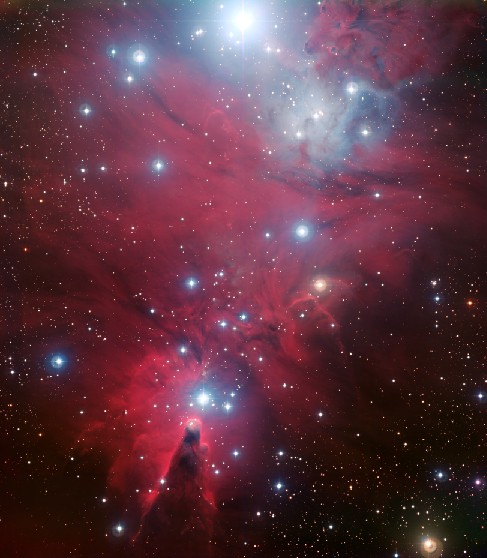 Figure 2. Young Cluster NGC 2264: Located about 2600 light-years from us, this region of newly formed stars, known as the Christmas Tree Cluster, is a complex mixture of hydrogen gas (which is ionized by hot embedded stars and shown in red), dark obscuring dust lanes, and brilliant young stars. The image shows a scene about 30 light-years across. (credit: ESO)

The NGC 2264 cluster’s H–R diagram is shown in Figure 3. The cluster in the middle of the Orion Nebula (shown in Star Formation) is in a similar stage of evolution. 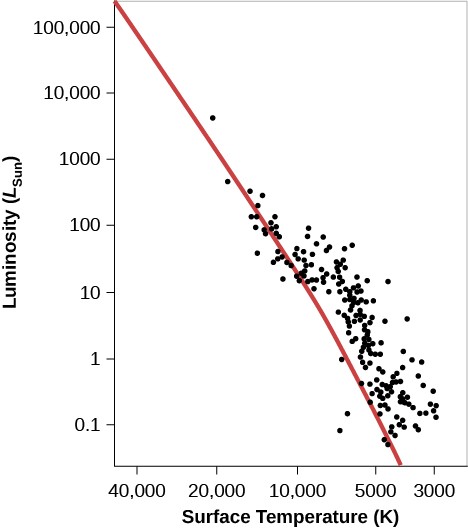 Figure 3. NGC 2264 H–R Diagram: Compare this H–R diagram to that in Figure 1; although the points scatter a bit more here, the theoretical and observational diagrams are remarkably, and satisfyingly, similar.

As clusters get older, their H–R diagrams begin to change. After a short time (less than a million years after they reach the main sequence), the most massive stars use up the hydrogen in their cores and evolve off the main sequence to become red giants and supergiants. As more time passes, stars of lower mass begin to leave the main sequence and make their way to the upper right of the H–R diagram.

To see the evolution of a star cluster in a dwarf galaxy, you can watch this brief animation of how its H–R diagram changes.

Figure 4 is a photograph of NGC 3293, a cluster that is about 10 million years old. The dense clouds of gas and dust are gone. One massive star has evolved to become a red giant and stands out as an especially bright orange member of the cluster. 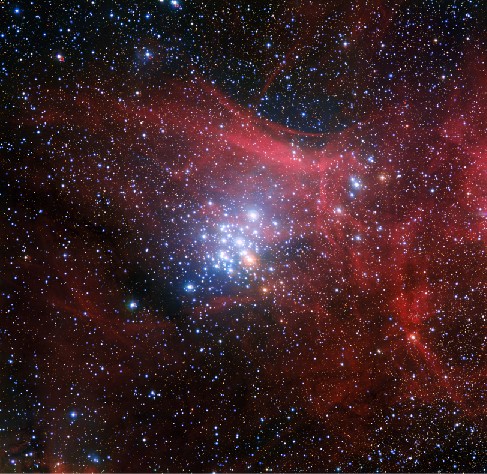 Figure 4. NGC 3293: All the stars in an open star cluster like NGC 3293 form at about the same time. The most massive stars, however, exhaust their nuclear fuel more rapidly and hence evolve more quickly than stars of low mass. As stars evolve, they become redder. The bright orange star in NGC 3293 is the member of the cluster that has evolved most rapidly. (credit: ESO/G. Beccari)

Figure 5 shows the H–R diagram of the open cluster M41, which is roughly 100 million years old; by this time, a significant number of stars have moved off to the right and become red giants. Note the gap that appears in this H–R diagram between the stars near the main sequence and the red giants. A gap does not necessarily imply that stars avoid a region of certain temperatures and luminosities. In this case, it simply represents a domain of temperature and luminosity through which stars evolve very quickly. We see a gap for M41 because at this particular moment, we have not caught a star in the process of scurrying across this part of the diagram. 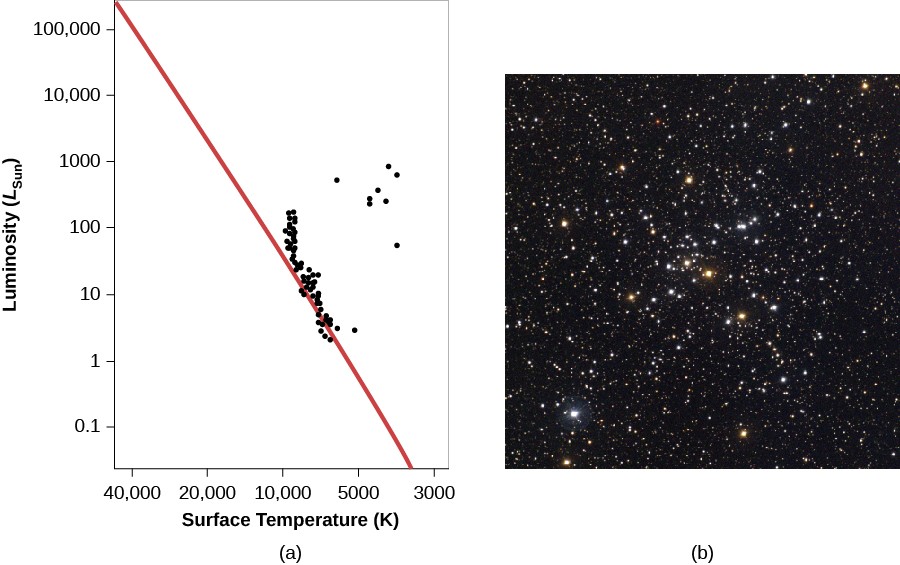 Figure 5. Cluster M41: (a) Cluster M41 is older than NGC 2264 (see [link]) and contains several red giants. Some of its more massive stars are no longer close to the zero-age main sequence (red line). (b) This ground-based photograph shows the open cluster M41. Note that it contains several orange-color stars. These are stars that have exhausted hydrogen in their centers, and have swelled up to become red giants. (credit b: modification of work by NOAO/AURA/NSF) 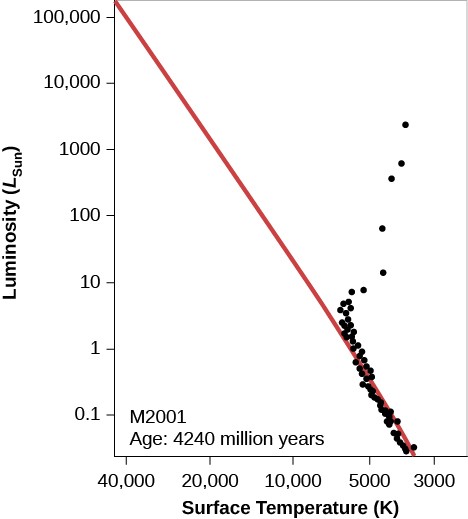 Figure 6. H–R Diagram for an Older Cluster: We see the H–R diagram for a hypothetical older cluster at an age of 4.24 billion years. Note that most of the stars on the upper part of the main sequence have turned off toward the red-giant region. And the most massive stars in the cluster have already died and are no longer on the diagram.

The oldest clusters of all are the globular clusters. Figure 7 shows the H–R diagram of globular cluster 47 Tucanae. Notice that the luminosity and temperature scales are different from those of the other H–R diagrams in this chapter. In Figure 6 for example, the luminosity scale on the left side of the diagram goes from 0.1 to 100,000 times the Sun’s luminosity. But in Figure 7, the luminosity scale has been significantly reduced in extent. So many stars in this old cluster have had time to turn off the main sequence that only the very bottom of the main sequence remains. 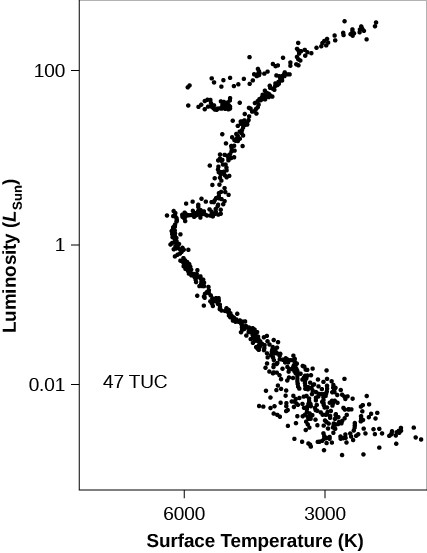 Figure 7. Cluster 47 Tucanae: This H–R diagram is for the globular cluster 47. Note that the scale of luminosity differs from that of the other H–R diagrams in this chapter. We are only focusing on the lower portion of the main sequence, the only part where stars still remain in this old cluster.

Check out this brief NASA video with a 3-D visualization of how an H–R diagram is created for the globular cluster Omega Centauri.

Just how old are the different clusters we have been discussing? To get their actual ages (in years), we must compare the appearances of our calculated H–R diagrams of different ages to observed H–R diagrams of real clusters. In practice, astronomers use the position at the top of the main sequence (that is, the luminosity at which stars begin to move off the main sequence to become red giants) as a measure of the age of a cluster (the main-sequence turnoff we discussed previously). For example, we can compare the luminosities of the brightest stars that are still on the main sequence in Figure 3 and Figure 6.

Using this method, some associations and open clusters turn out to be as young as 1 million years old, while others are several hundred million years old. Once all of the interstellar matter surrounding a cluster has been used to form stars or has dispersed and moved away from the cluster, star formation ceases, and stars of progressively lower mass move off the main sequence, as shown in Figure 3, Figure 5, and Figure 6.

To our surprise, even the youngest of the globular clusters in our Galaxy are found to be older than the oldest open cluster. All of the globular clusters have main sequences that turn off at a luminosity less than that of the Sun. Star formation in these crowded systems ceased billions of years ago, and no new stars are coming on to the main sequence to replace the ones that have turned off (see Figure 8).

Figure 8. H–R Diagrams for Clusters of Different Ages: This sketch shows how the turn-off point from the main sequence gets lower as we make H–R diagrams for clusters that are older and older.

Indeed, the globular clusters are the oldest structures in our Galaxy (and in other galaxies as well). The youngest have ages of about 11 billion years and some appear to be even older. Since these are the oldest objects we know of, this estimate is one of the best limits we have on the age of the universe itself—it must be at least 11 billion years old. We will return to the fascinating question of determining the age of the entire universe in the chapter on The Big Bang.