Theory tells us what black holes are like. But do they actually exist? And how do we go about looking for something that is many light years away, only about a few dozen kilometers across (if a stellar black hole), and completely black? It turns out that the trick is not to look for the black hole itself but instead to look for what it does to a nearby companion star.

As we saw, when very massive stars collapse, they leave behind their gravitational influence. What if a member of a double-star system becomes a black hole, and its companion manages to survive the death of the massive star? While the black hole disappears from our view, we may be able to deduce its presence from the things it does to its companion.

Requirements for a Black Hole

So, here is a prescription for finding a black hole: start by looking for a star whose motion (determined from the Doppler shift of its spectral lines) shows it to be a member of a binary star system. If both stars are visible, neither can be a black hole, so focus your attention on just those systems where only one star of the pair is visible, even with our most sensitive telescopes.

Being invisible is not enough, however, because a relatively faint star might be hard to see next to the glare of a brilliant companion or if it is shrouded by dust. And even if the star really is invisible, it could be a neutron star. Therefore, we must also have evidence that the unseen star has a mass too high to be a neutron star and that it is a collapsed object—an extremely small stellar remnant.

We can use Kepler’s law (see Orbits and Gravity) and our knowledge of the visible star to measure the mass of the invisible member of the pair. If the mass is greater than about 3 MSun, then we are likely seeing (or, more precisely, not seeing) a black hole—as long as we can make sure the object really is a collapsed star.

If matter falls toward a compact object of high gravity, the material is accelerated to high speed. Near the event horizon of a black hole, matter is moving at velocities that approach the speed of light. As the atoms whirl chaotically toward the event horizon, they rub against each other; internal friction can heat them to temperatures of 100 million K or more. Such hot matter emits radiation in the form of flickering X-rays. The last part of our prescription, then, is to look for a source of X-rays associated with the binary system. Since X-rays do not penetrate Earth’s atmosphere, such sources must be found using X-ray telescopes in space.

In our example, the infalling gas that produces the X-ray emission comes from the black hole’s companion star. As we saw in The Death of Stars, stars in close binary systems can exchange mass, especially as one of the members expands into a red giant. Suppose that one star in a double-star system has evolved to a black hole and that the second star begins to expand. If the two stars are not too far apart, the outer layers of the expanding star may reach the point where the black hole exerts more gravitational force on them than do the inner layers of the red giant to which the atmosphere belongs. The outer atmosphere then passes through the point of no return between the stars and falls toward the black hole.

The mutual revolution of the giant star and the black hole causes the material falling toward the black hole to spiral around it rather than flow directly into it. The infalling gas whirls around the black hole in a pancake of matter called an accretion disk. It is within the inner part of this disk that matter is revolving about the black hole so fast that internal friction heats it up to X-ray–emitting temperatures.

Another way to form an accretion disk in a binary star system is to have a powerful stellar wind come from the black hole’s companion. Such winds are a characteristic of several stages in a star’s life. Some of the ejected gas in the wind will then flow close enough to the black hole to be captured by it into the disk (Figure 1). 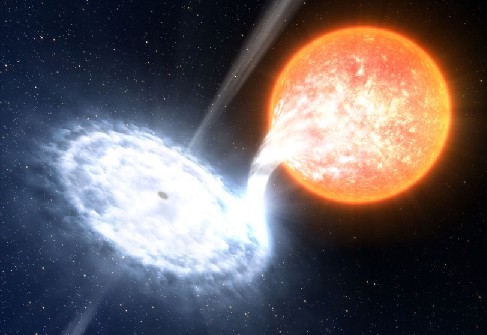 Figure 1. Binary Black Hole: This artist’s rendition shows a black hole and star (red). As matter streams from the star, it forms a disk around the black hole. Some of the swirling material close to the black hole is pushed outward perpendicular to the disk in two narrow jets. (credit: modification of work by ESO/L. Calçada)

We should point out that, as often happens, the measurements we have been discussing are not quite as simple as they are described in introductory textbooks. In real life, Kepler’s law allows us to calculate only the combined mass of the two stars in the binary system. We must learn more about the visible star of the pair and its history to ascertain the distance to the binary pair, the true size of the visible star’s orbit, and how the orbit of the two stars is tilted toward Earth, something we can rarely measure. And neutron stars can also have accretion disks that produce X-rays, so astronomers must study the properties of these X-rays carefully when trying to determine what kind of object is at the center of the disk. Nevertheless, a number of systems that clearly contain black holes have now been found.

The Discovery of Stellar-Mass Black Holes

Because X-rays are such important tracers of black holes that are having some of their stellar companions for lunch, the search for black holes had to await the launch of sophisticated X-ray telescopes into space. These instruments must have the resolution to locate the X-ray sources accurately and thereby enable us to match them to the positions of binary star systems.

The first black hole binary system to be discovered is called Cygnus X-1. The visible star in this binary system is spectral type O. Measurements of the Doppler shifts of the O star’s spectral lines show that it has an unseen companion. The X-rays flickering from it strongly indicate that the companion is a small collapsed object. The mass of the invisible collapsed companion is about 15 times that of the Sun. The companion is therefore too massive to be either a white dwarf or a neutron star.

A number of other binary systems also meet all the conditions for containing a black hole. Table 1 lists the characteristics of some of the best examples.

After an isolated star, or even one in a binary star system, becomes a black hole, it probably won’t be able to grow much larger. Out in the suburban regions of the Milky Way Galaxy where we live (see The Milky Way Galaxy), stars and star systems are much too far apart for other stars to provide “food” to a hungry black hole. After all, material must approach very close to the event horizon before the gravity is any different from that of the star before it became the black hole.

But, as will see, the central regions of galaxies are quite different from their outer parts. Here, stars and raw material can be quite crowded together, and they can interact much more frequently with each other. Therefore, black holes in the centers of galaxies may have a much better opportunity to find mass close enough to their event horizons to pull in. Black holes are not particular about what they “eat”: they are happy to consume other stars, asteroids, gas, dust, and even other black holes. (If two black holes merge, you just get a black hole with more mass and a larger event horizon.)

As a result, black holes in crowded regions can grow, eventually swallowing thousands or even millions of times the mass of the Sun. Ground-based observations have provided compelling evidence that there is a black hole in the center of our own Galaxy with a mass of about 4 million times the mass of the Sun (we’ll discuss this further in the chapter on The Milky Way Galaxy). Observations with the Hubble Space Telescope have shown dramatic evidence for the existence of black holes in the centers of many other galaxies. These black holes can contain more than a billion solar masses. The feeding frenzy of such supermassive black holes may be responsible for some of the most energetic phenomena in the universe (see Active Galaxies, Quasars, and Supermassive Black Holes). And evidence from more recent X-ray observations is also starting to indicate the existence of “middle-weight” black holes, whose masses are dozens to thousands of times the mass of the Sun. The crowded inner regions of the globular clusters we described in Stars from Adolescence to Old Age may be just the right breeding grounds for such intermediate-mass black holes.

Over the past decades, many observations, especially with the Hubble Space Telescope and with X-ray satellites, have been made that can be explained only if black holes really do exist. Furthermore, the observational tests of Einstein’s general theory of relativity have convinced even the most skeptical scientists that his picture of warped or curved spacetime is indeed our best description of the effects of gravity near these black holes.

The best evidence of stellar-mass black holes comes from binary star systems in which (1) one star of the pair is not visible, (2) the flickering X-ray emission is characteristic of an accretion disk around a compact object, and (3) the orbit and characteristics of the visible star indicate that the mass of its invisible companion is greater than 3 MSun. A number of systems with these characteristics have been found. Black holes with masses of millions to billions of solar masses are found in the centers of large galaxies.

the disk of gas and dust found orbiting newborn stars, as well as compact stellar remnants such as white dwarfs, neutron stars, and black holes when they are in binary systems and are sufficiently close to their binary companions to draw off material