Cosmic Samples and the Origin of the Solar System

As we saw in Comets and Asteroids: Debris of the Solar System, the ices in comets evaporate when they get close to the Sun, together spraying millions of tons of rock and dust into the inner solar system. There is also dust from asteroids that have collided and broken up. Earth is surrounded by this material. As each of the larger dust or rock particles enters Earth’s atmosphere, it creates a brief fiery trail; this is often called a shooting star, but it is properly known as a meteor.

Meteors are tiny solid particles that enter Earth’s atmosphere from interplanetary space. Since the particles move at speeds of many kilometers per second, friction with the air vaporizes them at altitudes between 80 and 130 kilometers. The resulting flashes of light fade out within a few seconds. These “shooting stars” got their name because at night their luminous vapors look like stars moving rapidly across the sky. To be visible, a meteor must be within about 200 kilometers of the observer. On a typical dark, moonless night, an alert observer can see half a dozen meteors per hour. These sporadic meteors—those not associated with a meteor shower (explained in the next section)—are random occurrences. Over the entire Earth, the total number of meteors bright enough to be visible totals about 25 million per day.

The typical meteor is produced by a particle with a mass of less than 1 gram—no larger than a pea. How can we see such a small particle? The light you see comes from the much larger region of heated, glowing gas surrounding this little grain of interplanetary material. Because of its high speed, the energy in a pea-sized meteor is as great as that of an artillery shell fired on Earth, but this energy is dispersed high in Earth’s atmosphere. (When these tiny projectiles hit an airless body like the Moon, they do make small craters and generally pulverize the surface.)

If a particle the size of a golf ball strikes our atmosphere, it produces a much brighter trail called a fireball (Figure 1). A piece as large as a bowling ball has a fair chance of surviving its fiery entry if its approach speed is not too high. The total mass of meteoric material entering Earth’s atmosphere is estimated to be about 100 tons per day (which seems like a lot if you imagine it all falling in one place, but remember it is spread out all over our planet’s surface).

Figure 1: Fireball. When a larger piece of cosmic material strikes Earth’s atmosphere, it can make a bright fireball. This time-lapse meteor image was captured in April 2014 at the Atacama Large Millimeter/Submillimeter Array (ALMA). The visible trail results from the burning gas around the particle. (credit: modification of work by ESO/C Malin)

While it is difficult to capture images of fireballs and other meteors with still photography, it’s easy to capture the movement of these objects on video. The American Meteor Society maintains a website on which their members can share such videos.

Many—perhaps most—of the meteors that strike Earth are associated with specific comets. Some of these periodic comets still return to our view; others have long ago fallen apart, leaving only a trail of dust behind them. The dust particles from a given comet retain approximately the orbit of their parent, continuing to move together through space but spreading out over the orbit with time. When Earth, in its travels around the Sun, crosses such a dust stream, we see a sudden burst of meteor activity that usually lasts several hours; such an event is called a meteor shower.

The dust particles and pebbles that produce meteor showers are moving together in space before they encounter Earth. Thus, as we look up at the atmosphere, their parallel paths seem to come toward us from a place in the sky called the radiant. This is the direction in space from which the meteor stream seems to be diverging, just as long railroad tracks seem to diverge from a single spot on the horizon (Figure 2). Meteor showers are often designated by the constellation in which this radiant is located: for example, the Perseid meteor shower has its radiant in the constellation of Perseus. But you are likely to see shower meteors anywhere in the sky, not just in the constellation of the radiant. The characteristics of some of the more famous meteor showers are summarized in Table 1.

Figure 2: Radiant of a Meteor Shower. The tracks of the meteors diverge from a point in the distance, just as long, parallel railroad tracks appear to do. (credit “tracks”: Nathan Vaughn)

The meteoric dust is not always evenly distributed along the orbit of the comet, so during some years more meteors are seen when Earth intersects the dust stream, and in other years fewer. For example, a very clumpy distribution is associated with the Leonid meteors, which in 1833 and again in 1866 (after an interval of 33 years—the period of the comet) yielded the most spectacular showers (sometimes called meteor storms) ever recorded (Figure 3). During the Leonid storm on November 17, 1866, up to a hundred meteors were observed per second in some locations. The Leonid shower of 2001 was not this intense, but it peaked at nearly a thousand meteors per hour—one every few seconds—observable from any dark viewing site. 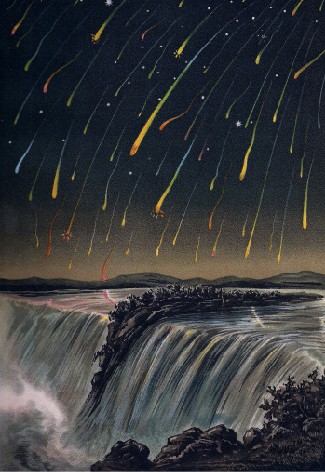 Figure 3: Leonid Meteor Storm. A painting depicts the great meteor shower or storm of 1833, shown with a bit of artistic license.

The most dependable annual meteor display is the Perseid shower, which appears each year for about three nights near August 11. In the absence of bright moonlight, you can see one meteor every few minutes during a typical Perseid shower. Astronomers estimate that the total combined mass of the particles in the Perseid swarm is nearly a billion tons; the comet that gave rise to the particles in that swarm, called Swift-Tuttle, must originally have had at least that much mass. However, if its initial mass were comparable to the mass measured for Comet Halley, then Swift-Tuttle would have contained several hundred billion tons, suggesting that only a very small fraction of the original cometary material survives in the meteor stream.

The California Academy of Sciences has a short animated guide on “How to Observe a Meteor Shower.”

No shower meteor has ever survived its flight through the atmosphere and been recovered for laboratory analysis. However, there are other ways to investigate the nature of these particles and thereby gain additional insight into the comets from which they are derived. Analysis of the flight paths of meteors shows that most of them are very light or porous, with densities typically less than 1.0 g/cm3. If you placed a fist-sized lump of meteor material on a table in Earth’s gravity, it might well fall apart under its own weight.

Such light particles break up very easily in the atmosphere, accounting for the failure of even relatively large shower meteors to reach the ground. Comet dust is apparently fluffy, rather inconsequential stuff. NASA’s Stardust mission used a special substance, called aerogel, to collect these particles. We can also infer this from the tiny comet particles recovered in Earth’s atmosphere with high-flying aircraft (see Figure 4 in The “Long-Haired” Comets). This fluff, by its very nature, cannot reach Earth’s surface intact. However, more substantial fragments from asteroids do make it into our laboratories, as we will see in the next section.

Showering with the Stars

Observing a meteor shower is one of the easiest and most enjoyable astronomy activities for beginners (Figure 4). The best thing about it is that you don’t need a telescope or binoculars—in fact, they would positively get in your way. What you do need is a site far from city lights, with an unobstructed view of as much sky as possible. While the short bright lines in the sky made by individual meteors could, in theory, be traced back to a radiant point (as shown in Figure 4), the quick blips of light that represent the end of the meteor could happen anywhere above you. 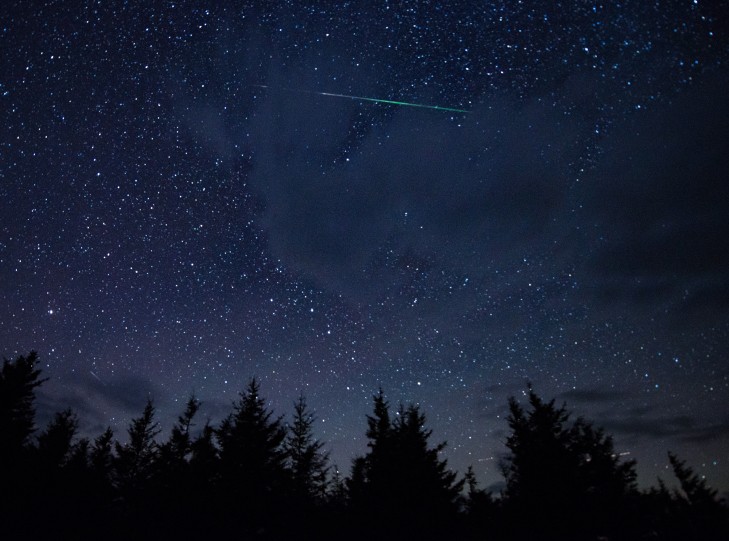 The key to observing meteor showers is not to restrict your field of view, but to lie back and scan the sky alertly. Try to select a good shower (see the list in Table 1) and a night when the Moon will not be bright at the time you are observing. The Moon, street lights, vehicle headlights, bright flashlights, and cell phone and tablet screens will all get in the way of your seeing the faint meteor streaks.

You will see more meteors after midnight, when you are on the hemisphere of Earth that faces forward—in the direction of Earth’s revolution around the Sun. Before midnight, you are observing from the “back side” of Earth, and the only meteors you see will be those that traveled fast enough to catch up with Earth’s orbital motion.

When you’ve gotten away from all the lights, give your eyes about 15 minutes to get “dark adapted”—that is, for the pupils of your eyes to open up as much as possible. (This adaptation is the same thing that happens in a dark movie theater. When you first enter, you can’t see a thing, but eventually, as your pupils open wider, you can see pretty clearly by the faint light of the screen—and notice all that spilled popcorn on the floor.)

Seasoned meteor observers find a hill or open field and make sure to bring warm clothing, a blanket, and a thermos of hot coffee or chocolate with them. (It’s also nice to take along someone with whom you enjoy sitting in the dark.) Don’t expect to see fireworks or a laser show: meteor showers are subtle phenomena, best approached with a patience that reflects the fact that some of the dust you are watching burn up may first have been gathered into its parent comet more than 4.5 billion years ago, as the solar system was just forming.

When a fragment of interplanetary dust strikes Earth’s atmosphere, it burns up to create a meteor. Streams of dust particles traveling through space together produce meteor showers, in which we see meteors diverging from a spot in the sky called the radiant of the shower. Many meteor showers recur each year and are associated with particular comets that have left dust behind as they come close to the Sun and their ices evaporate (or have broken up into smaller pieces).

meteor: a small piece of solid matter that enters Earth’s atmosphere and burns up, popularly called a shooting star because it is seen as a small flash of light

meteor shower: many meteors appearing to radiate from one point in the sky; produced when Earth passes through a cometary dust stream