Other Worlds: An Introduction to the Solar System

Origin of the Solar System

Much of astronomy is motivated by a desire to understand the origin of things: to find at least partial answers to age-old questions of where the universe, the Sun, Earth, and we ourselves came from. Each planet and moon is a fascinating place that may stimulate our imagination as we try to picture what it would be like to visit. Taken together, the members of the solar system preserve patterns that can tell us about the formation of the entire system. As we begin our exploration of the planets, we want to introduce our modern picture of how the solar system formed.

The recent discovery of hundreds of planets in orbit around other stars has shown astronomers that many exoplanetary systems can be quite different from our own solar system. For example, it is common for these systems to include planets intermediate in size between our terrestrial and giant planets. These are often called superearths. Some exoplanet systems even have giant planets close to the star, reversing the order we see in our system. In The Birth of Stars and the Discovery of Planets outside the Solar System, we will look at these exoplanet systems. But for now, let us focus on theories of how our own particular system has formed and evolved.

One way to approach our question of origin is to look for regularities among the planets. We found, for example, that all the planets lie in nearly the same plane and revolve in the same direction around the Sun. The Sun also spins in the same direction about its own axis. Astronomers interpret this pattern as evidence that the Sun and planets formed together from a spinning cloud of gas and dust that we call the solar nebula (Figure 1). 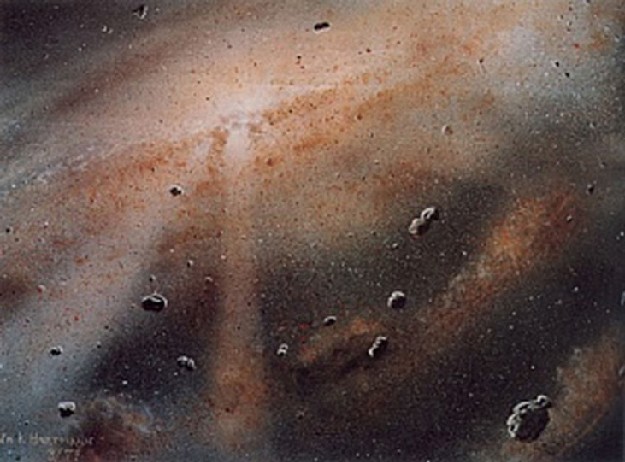 Figure 1. Solar Nebula: This artist’s conception of the solar nebula shows the flattened cloud of gas and dust from which our planetary system formed. Icy and rocky planetesimals (precursors of the planets) can be seen in the foreground. The bright center is where the Sun is forming. (credit: William K. Hartmann, Planetary Science Institute)

The composition of the planets gives another clue about origins. Spectroscopic analysis allows us to determine which elements are present in the Sun and the planets. The Sun has the same hydrogen-dominated composition as Jupiter and Saturn, and therefore appears to have been formed from the same reservoir of material. In comparison, the terrestrial planets and our Moon are relatively deficient in the light gases and the various ices that form from the common elements oxygen, carbon, and nitrogen. Instead, on Earth and its neighbors, we see mostly the rarer heavy elements such as iron and silicon. This pattern suggests that the processes that led to planet formation in the inner solar system must somehow have excluded much of the lighter materials that are common elsewhere. These lighter materials must have escaped, leaving a residue of heavy stuff.

The reason for this is not hard to guess, bearing in mind the heat of the Sun. The inner planets and most of the asteroids are made of rock and metal, which can survive heat, but they contain very little ice or gas, which evaporate when temperatures are high. (To see what we mean, just compare how long a rock and an ice cube survive when they are placed in the sunlight.) In the outer solar system, where it has always been cooler, the planets and their moons, as well as icy dwarf planets and comets, are composed mostly of ice and gas.

The Evidence from Far Away

A second approach to understanding the origins of the solar system is to look outward for evidence that other systems of planets are forming elsewhere. We cannot look back in time to the formation of our own system, but many stars in space are much younger than the Sun. In these systems, the processes of planet formation might still be accessible to direct observation. We observe that there are many other “solar nebulas” or circumstellar disks—flattened, spinning clouds of gas and dust surrounding young stars. These disks resemble our own solar system’s initial stages of formation billions of years ago (Figure 2).

Figure 2. A Photographic Atlas of Planetary Nurseries in the Orion Nebula: These Hubble Space Telescope images show embedded circumstellar disks orbiting very young stars. Each is seen from a different angle. Some are energized to glow brightly by the light of a nearby star, while others are dark and seen in silhouette against the bright glowing gas of the Orion nebula.

Circumstellar disks are a common occurrence around very young stars, suggesting that disks and stars form together. Astronomers can use theoretical calculations to see how solid bodies might form from the gas and dust in these disks as they cool. These models show that material begins to coalesce first by forming smaller objects, precursors of the planets, which we call planetesimals.

Today’s fast computers can simulate the way millions of planetesimals, probably no larger than 100 kilometers in diameter, might gather together under their mutual gravity to form the planets we see today. We are beginning to understand that this process was a violent one, with planetesimals crashing into each other and sometimes even disrupting the growing planets themselves. As a consequence of those violent impacts (and the heat from radioactive elements in them), all the planets were heated until they were liquid and gas, and therefore differentiated, which helps explain their present internal structures.

The process of impacts and collisions in the early solar system was complex and, apparently, often random. The solar nebula model can explain many of the regularities we find in the solar system, but the random collisions of massive collections of planetesimals could be the reason for some exceptions to the “rules” of solar system behavior. For example, why do the planets Uranus and Pluto spin on their sides? Why does Venus spin slowly and in the opposite direction from the other planets? Why does the composition of the Moon resemble Earth in many ways and yet exhibit substantial differences? The answers to such questions probably lie in enormous collisions that took place in the solar system long before life on Earth began.

Today, some 4.5 billion years after its origin, the solar system is—thank goodness—a much less violent place. As we will see, however, some planetesimals have continued to interact and collide, and their fragments move about the solar system as roving “transients” that can make trouble for the established members of the Sun’s family, such as our own Earth. (We discuss this “troublemaking” in Comets and Asteroids: Debris of the Solar System.)

A great variety of infographics at space.com let you explore what it would be like to live on various worlds in the solar system.

Regularities among the planets have led astronomers to hypothesize that the Sun and the planets formed together in a giant, spinning cloud of gas and dust called the solar nebula. Astronomical observations show tantalizingly similar circumstellar disks around other stars. Within the solar nebula, material first coalesced into planetesimals; many of these gathered together to make the planets and moons. The remainder can still be seen as comets and asteroids. Probably all planetary systems have formed in similar ways, but many exoplanet systems have evolved along quite different paths, as we will see in Cosmic Samples and the Origin of the Solar System.

planetesimals: objects, from tens to hundreds of kilometers in diameter, that formed in the solar nebula as an intermediate step between tiny grains and the larger planetary objects we see today; the comets and some asteroids may be leftover planetesimals

solar nebula: the cloud of gas and dust from which the solar system formed