Astronomers were able to make tremendous progress in mapping the spiral structure of the Milky Way after the discovery of the 21-cm line that comes from cool hydrogen (see Between the Stars: Gas and Dust in Space). Remember that the obscuring effect of interstellar dust prevents us from seeing stars at large distances in the disk at visible wavelengths. However, radio waves of 21-cm wavelength pass right through the dust, enabling astronomers to detect hydrogen atoms throughout the Galaxy. More recent surveys of the infrared emission from stars in the disk have provided a similar dust-free perspective of our Galaxy’s stellar distribution. Despite all this progress over the past fifty years, we are still just beginning to pin down the precise structure of our Galaxy.

The Arms of the Milky Way

Our radio observations of the disk’s gaseous component indicate that the Galaxy has two major spiral arms that emerge from the bar and several fainter arms and shorter spurs. You can see a recently assembled map of our Galaxy’s arm structure—derived from studies in the infrared—in Figure 1. 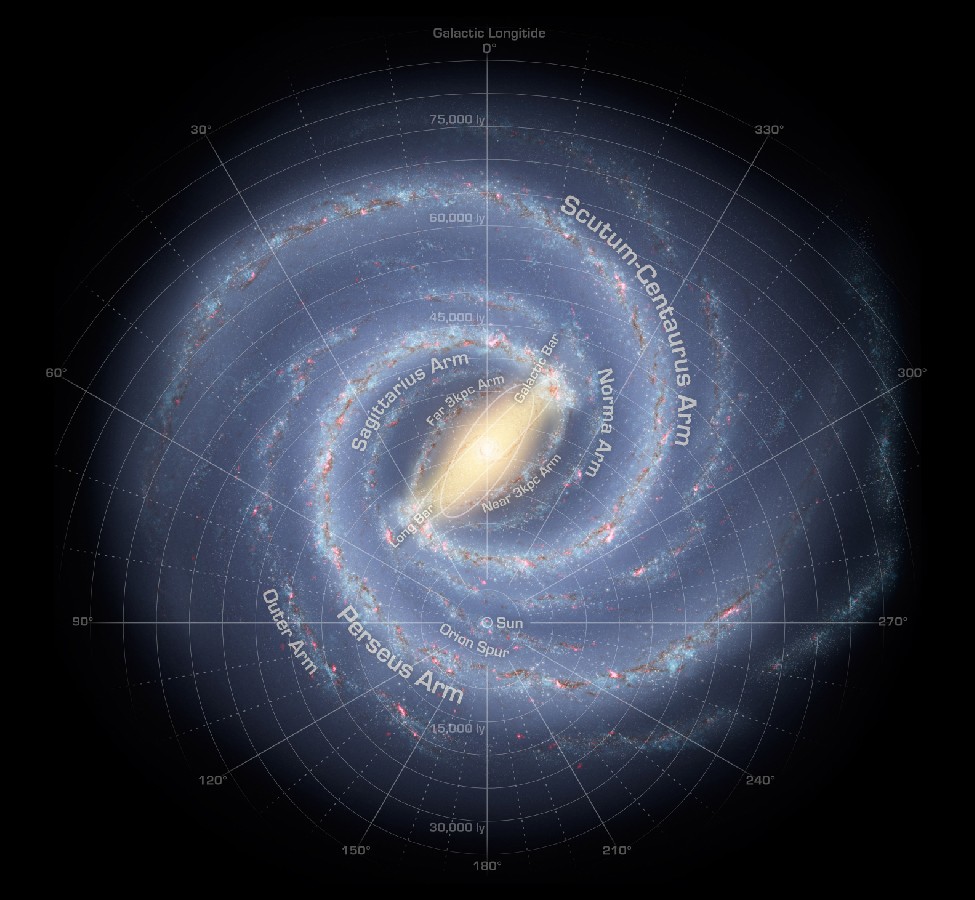 Figure 1. Milky Way Bar and Arms: Here, we see the Milky Way Galaxy as it would look from above. This image, assembled from data from NASA’s WISE mission, shows that the Milky Way Galaxy has a modest bar in its central regions. Two spiral arms, Scutum-Centaurus and Perseus, emerge from the ends of the bar and wrap around the bulge. The Sagittarius and Outer arms have fewer stars than the other two arms. (credit: modification of work by NASA/JPL-Caltech/R. Hurt (SSC/Caltech))

The Sun is near the inner edge of a short arm called the Orion Spur, which is about 10,000 light-years long and contains such conspicuous features as the Cygnus Rift (the great dark nebula in the summer Milky Way) and the bright Orion Nebula. Figure 2 shows a few other objects that share this small section of the Galaxy with us and are easy to see. Remember, the farther away we try to look from our own arm, the more the dust in the Galaxy builds up and makes it hard to see with visible light. 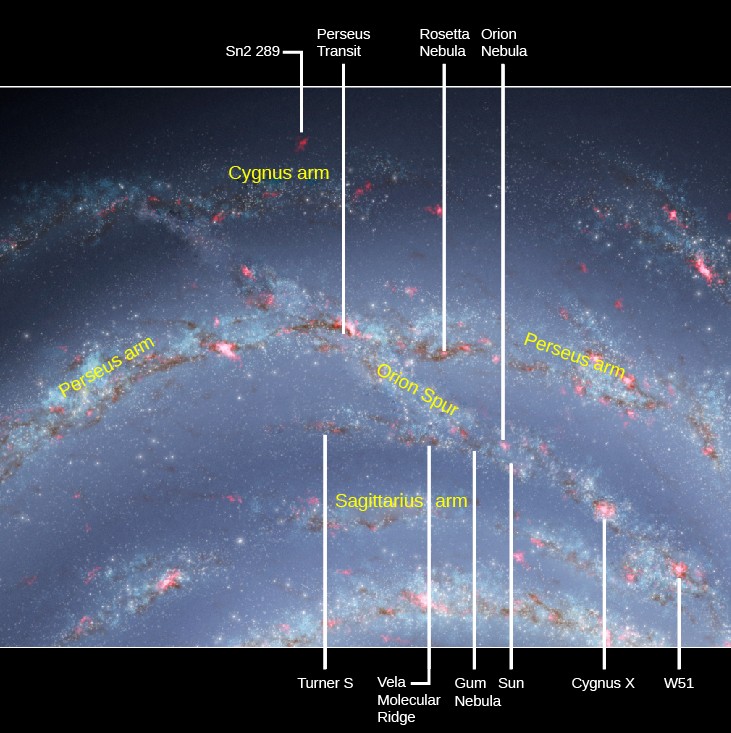 Figure 2. Orion Spur: The Sun is located in the Orion Spur, which is a minor spiral arm located between two other arms. In this diagram, the white lines point to some other noteworthy objects that share this feature of the Milky Way Galaxy with the Sun. (credit: modification of work by NASA/JPL-Caltech)

At the Sun’s distance from its center, the Galaxy does not rotate like a solid wheel or a CD inside your player. Instead, the way individual objects turn around the center of the Galaxy is more like the solar system. Stars, as well as the clouds of gas and dust, obey Kepler’s third law. Objects farther from the center take longer to complete an orbit around the Galaxy than do those closer to the center. In other words, stars (and interstellar matter) in larger orbits in the Galaxy trail behind those in smaller ones. This effect is called differential galactic rotation.

Differential rotation would appear to explain why so much of the material in the disk of the Milky Way is concentrated into elongated features that resemble spiral arms. No matter what the original distribution of the material might be, the differential rotation of the Galaxy can stretch it out into spiral features. Figure 3 shows the development of spiral arms from two irregular blobs of interstellar matter. Notice that as the portions of the blobs closest to the galactic center move faster, those farther out trail behind.

Figure 3. Simplified Model for the Formation of Spiral Arms: This sketch shows how spiral arms might form from irregular clouds of interstellar material stretched out by the different rotation rates throughout the Galaxy. The regions farthest from the galactic center take longer to complete their orbits and thus lag behind the inner regions. If this were the only mechanism for creating spiral arms, then over time the spiral arms would completely wind up and disappear. Since many galaxies have spiral arms, they must be long-lived, and there must be other processes at work to maintain them.

But this picture of spiral arms presents astronomers with an immediate problem. If that’s all there were to the story, differential rotation—over the roughly 13-billion-year history of the Galaxy—would have wound the Galaxy’s arms tighter and tighter until all semblance of spiral structure had disappeared. But did the Milky Way actually have spiral arms when it formed 13 billion years ago? And do spiral arms, once formed, last for that long a time?

With the advent of the Hubble Space Telescope, it has become possible to observe the structure of very distant galaxies and to see what they were like shortly after they began to form more than 13 billion years ago. What the observations show is that galaxies in their infancy had bright, clumpy star-forming regions, but no regular spiral structure.

Over the next few billion years, the galaxies began to “settle down.” The galaxies that were to become spirals lost their massive clumps and developed a central bulge. The turbulence in these galaxies decreased, rotation began to dominate the motions of the stars and gas, and stars began to form in a much quieter disk. Smaller star-forming clumps began to form fuzzy, not-very-distinct spiral arms. Bright, well-defined spiral arms began to appear only when the galaxies were about 3.6 billion years old. Initially, there were two well-defined arms. Multi-armed structures in galaxies like we see in the Milky Way appeared only when the universe was about 8 billion years old.

We will discuss the history of galaxies in more detail in The Evolution and Distribution of Galaxies. But, even from our brief discussion, you can get the sense that the spiral structures we now observe in mature galaxies have come along later in the full story of how things develop in the universe.

Scientists have used supercomputer calculations to model the formation and evolution of the arms. These calculations follow the motions of up to 100 million “star particles” to see whether gravitational forces can cause them to form spiral structure. What these calculations show is that giant molecular clouds (which we discussed in Between the Stars: Gas and Dust in Space) have enough gravitational influence over their surroundings to initiate the formation of structures that look like spiral arms. These arms then become self-perpetuating and can survive for at least several billion years. The arms may change their brightness over time as star formation comes and goes, but they are not temporary features. The concentration of matter in the arms exerts sufficient gravitational force to keep the arms together over long periods of time.

The gaseous distribution in the Galaxy’s disk has two main spiral arms that emerge from the ends of the central bar, along with several fainter arms and short spurs; the Sun is located in one of those spurs. Measurements show that the Galaxy does not rotate as a solid body, but instead its stars and gas follow differential rotation, such that the material closer to the galactic center completes its orbit more quickly. Observations show that galaxies like the Milky Way take several billion years after they began to form to develop spiral structure.

a spiral-shaped region, characterized by relatively dense interstellar material and young stars, that is observed in the disks of spiral galaxies