The last two sections introduced you to many new concepts, and we hope that through those, you have seen one major idea emerge. Astronomers can learn about the elements in stars and galaxies by decoding the information in their spectral lines. There is a complicating factor in learning how to decode the message of starlight, however. If a star is moving toward or away from us, its lines will be in a slightly different place in the spectrum from where they would be in a star at rest. And most objects in the universe do have some motion relative to the Sun.

In 1842, Christian Doppler first measured the effect of motion on waves by hiring a group of musicians to play on an open railroad car as it was moving along the track. He then applied what he learned to all waves, including light, and pointed out that if a light source is approaching or receding from the observer, the light waves will be, respectively, crowded more closely together or spread out. The general principle, now known as the Doppler effect, is illustrated in Figure 1. 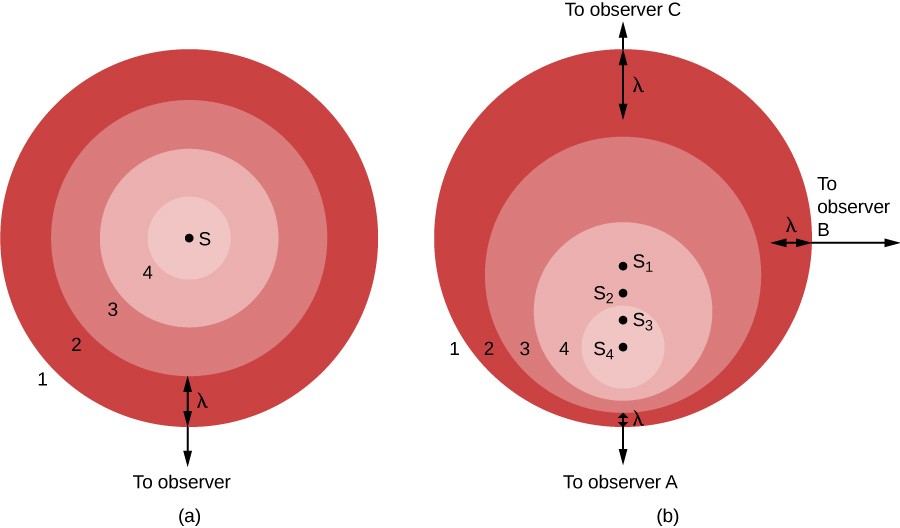 Figure 1: Doppler Effect. (a) A source, S, makes waves whose numbered crests (1, 2, 3, and 4) wash over a stationary observer. (b) The source S now moves toward observer A and away from observer C. Wave crest 1 was emitted when the source was at position S4, crest 2 at position S2, and so forth. Observer A sees waves compressed by this motion and sees a blueshift (if the waves are light). Observer C sees the waves stretched out by the motion and sees a redshift. Observer B, whose line of sight is perpendicular to the source’s motion, sees no change in the waves (and feels left out).

In Figure 1a, the light source (S) is at rest with respect to the observer. The source gives off a series of waves, whose crests we have labeled 1, 2, 3, and 4. The light waves spread out evenly in all directions, like the ripples from a splash in a pond. The crests are separated by a distance, λ, where λ is the wavelength. The observer, who happens to be located in the direction of the bottom of the image, sees the light waves coming nice and evenly, one wavelength apart. Observers located anywhere else would see the same thing.

On the other hand, if the source of light is moving with respect to the observer, as seen in Figure 2b, the situation is more complicated. Between the time one crest is emitted and the next one is ready to come out, the source has moved a bit, toward the bottom of the page. From the point of view of observer A, this motion of the source has decreased the distance between crests—it’s squeezing the crests together, this observer might say.

In Figure 2b, we show the situation from the perspective of three observers. The source is seen in four positions, S1, S2, S3, and S4, each corresponding to the emission of one wave crest. To observer A, the waves seem to follow one another more closely, at a decreased wavelength and thus increased frequency. (Remember, all light waves travel at the speed of light through empty space, no matter what. This means that motion cannot affect the speed, but only the wavelength and the frequency. As the wavelength decreases, the frequency must increase. If the waves are shorter, more will be able to move by during each second.)

The situation is not the same for other observers. Let’s look at the situation from the point of view of observer C, located opposite observer A in the figure. For her, the source is moving away from her location. As a result, the waves are not squeezed together but instead are spread out by the motion of the source. The crests arrive with an increased wavelength and decreased frequency. To observer B, in a direction at right angles to the motion of the source, no effect is observed. The wavelength and frequency remain the same as they were in part (a) of the figure.

We can see from this illustration that the Doppler effect is produced only by a motion toward or away from the observer, a motion called radial velocity. Sideways motion does not produce such an effect. Observers between A and B would observe some shortening of the light waves for that part of the motion of the source that is along their line of sight. Observers between B and C would observe lengthening of the light waves that are along their line of sight.

You may have heard the Doppler effect with sound waves. When a train whistle or police siren approaches you and then moves away, you will notice a decrease in the pitch (which is how human senses interpret sound wave frequency) of the sound waves. Compared to the waves at rest, they have changed from slightly more frequent when coming toward you, to slightly less frequent when moving away from you.

A nice example of this change in the sound of a train whistle can be heard at the end of the classic Beach Boys song “Caroline, No” on their album Pet Sounds. To hear this sound, watch this video of the song. The sound of the train begins at approximately 2:20.

When the source of waves moves toward you, the wavelength decreases a bit. If the waves involved are visible light, then the colors of the light change slightly. As wavelength decreases, they shift toward the blue end of the spectrum: astronomers call this a blueshift (since the end of the spectrum is really violet, the term should probably be violetshift, but blue is a more common color). When the source moves away from you and the wavelength gets longer, we call the change in colors a redshift. Because the Doppler effect was first used with visible light in astronomy, the terms “blueshift” and “redshift” became well established. Today, astronomers use these words to describe changes in the wavelengths of radio waves or X-rays as comfortably as they use them to describe changes in visible light.

where λ is the wavelength emitted by the source, Δλ is the difference between λ and the wavelength measured by the observer, c is the speed of light, and v is the relative speed of the observer and the source in the line of sight. The variable v is counted as positive if the velocity is one of recession, and negative if it is one of approach. Solving this equation for the velocity, we find v = c × Δλ/λ.

If a star approaches or recedes from us, the wavelengths of light in its continuous spectrum appear shortened or lengthened, respectively, as do those of the dark lines. However, unless its speed is tens of thousands of kilometers per second, the star does not appear noticeably bluer or redder than normal. The Doppler shift is thus not easily detected in a continuous spectrum and cannot be measured accurately in such a spectrum. The wavelengths of the absorption lines can be measured accurately, however, and their Doppler shift is relatively simple to detect.

We can use the Doppler effect equation to calculate the radial velocity of an object if we know three things: the speed of light, the original (unshifted) wavelength of the light emitted, and the difference between the wavelength of the emitted light and the wavelength we observe. For particular absorption or emission lines, we usually know exactly what wavelength the line has in our laboratories on Earth, where the source of light is not moving. We can measure the new wavelength with our instruments at the telescope, and so we know the difference in wavelength due to Doppler shifting. Since the speed of light is a universal constant, we can then calculate the radial velocity of the star.

Show Answer
Because the light is shifted to a longer wavelength (redshifted), we know this gas cloud is moving away from us. The speed can be calculated using the Doppler shift formula:

Suppose a spectral line of hydrogen, normally at 500 nm, is observed in the spectrum of a star to be at 500.1 nm. How fast is the star moving toward or away from Earth?

Show Answer
Because the light is shifted to a longer wavelength, the star is moving away from us:

You may now be asking: if all the stars are moving and motion changes the wavelength of each spectral line, won’t this be a disaster for astronomers trying to figure out what elements are present in the stars? After all, it is the precise wavelength (or color) that tells astronomers which lines belong to which element. And we first measure these wavelengths in containers of gas in our laboratories, which are not moving. If every line in a star’s spectrum is now shifted by its motion to a different wavelength (color), how can we be sure which lines and which elements we are looking at in a star whose speed we do not know?

Take heart. This situation sounds worse than it really is. Astronomers rarely judge the presence of an element in an astronomical object by a single line. It is the pattern of lines unique to hydrogen or calcium that enables us to determine that those elements are part of the star or galaxy we are observing. The Doppler effect does not change the pattern of lines from a given element—it only shifts the whole pattern slightly toward redder or bluer wavelengths. The shifted pattern is still quite easy to recognize. Best of all, when we do recognize a familiar element’s pattern, we get a bonus: the amount the pattern is shifted can enable us to determine the speed of the objects in our line of sight.

The training of astronomers includes much work on learning to decode light (and other electromagnetic radiation). A skillful “decoder” can learn the temperature of a star, what elements are in it, and even its speed in a direction toward us or away from us. That’s really an impressive amount of information for stars that are light-years away.

If an atom is moving toward us when an electron changes orbits and produces a spectral line, we see that line shifted slightly toward the blue of its normal wavelength in a spectrum. If the atom is moving away, we see the line shifted toward the red. This shift is known as the Doppler effect and can be used to measure the radial velocities of distant objects.

Doppler effect: the apparent change in wavelength or frequency of the radiation from a source due to its relative motion away from or toward the observer

radial velocity: motion toward or away from the observer; the component of relative velocity that lies in the line of sight