The Life Cycle of Cosmic Material 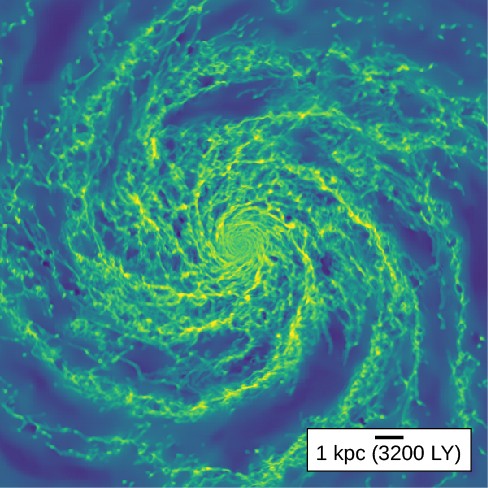 Figure 1. Large-Scale Distribution of Interstellar Matter: This image is from a computer simulation of the Milky Way Galaxy’s interstellar medium as a whole. The majority of gas, visible in greenish colors, is neutral hydrogen. In the densest regions in the spiral arms, shown in yellow, the gas is collected into giant molecular clouds. Low-density holes in the spiral arms, shown in blue, are the result of supernova explosions. (credit: modification of work by Mark Krumholz)

The most important thing to understand about the interstellar medium is that it is not static. Interstellar gas orbits through the Galaxy, and as it does so, it can become more or less dense, hotter and colder, and change its state of ionization. A particular parcel of gas may be neutral hydrogen at some point, then find itself near a young, hot star and become part of an H II region. The star may then explode as a supernova, heating the nearby gas up to temperatures of millions of degrees. Over millions of years, the gas may cool back down and become neutral again, before it collects into a dense region that gravity gathers into a giant molecular cloud (Figure 1).

The Cycle of Dust and Heavy Elements

While much of the mass of the interstellar medium is material accreted during the last few billion years from intergalactic space, this is not true of the elements heavier than hydrogen and helium, or of the dust. Instead, these components of the interstellar medium were made inside stars in the Milky Way, which returned them to the interstellar medium at the end of their lives. We will talk more about this process in later chapters, but for now just bear in mind what we learned in The Sun: A Nuclear Powerhouse. What stars “do for a living” is fuse heavier elements from lighter ones, producing energy in the process. As stars mature, they begin to lose some of the newly made elements to the reservoir of interstellar matter.

The same is true of dust grains. Dust forms when grains can condense in regions where gas is dense and cool. One place where the right conditions are found is the winds from luminous cool stars (the red giants and supergiants we discussed in The Stars: A Celestial Census). Grains can also condense in the matter thrown off by a supernova explosion as the ejected gases begin to cool.

The dust grains produced by stars may grow even further when they spend time in the dense parts of the interstellar medium, inside molecular clouds. In these environments, grains can stick together or gather additional atoms from the gas around them, growing larger. They also facilitate the production of other compounds, including some of the more complex molecules we discussed earlier.

The surfaces of the dust grains (see Cosmic Dust)—which would seem very large if you were an atom—provide “nooks and crannies” where these atoms can stick long enough to find partners and form molecules. (Think of the dust grains as “interstellar social clubs” where lonely atoms can meet and form meaningful relationships.) Eventually, the dust grains become coated with ices. The presence of the dust shields the molecules inside the clouds from ultraviolet radiation and cosmic rays that would break them up.

When stars finally begin to form within the cloud, they heat the grains and evaporate the ices. The gravitational attraction of the newly forming stars also increases the density of the surrounding cloud material. Many more chemical reactions take place on the surfaces of grains in the gas surrounding the newly forming stars, and these areas are where organic molecules are formed. These molecules can be incorporated into newly formed planetary systems, and the early Earth may have been seeded in just such a way.

Indeed, scientists speculate that some of the water on Earth may have come from interstellar grains. Recent observations from space have shown that water is abundant in dense interstellar clouds. Since stars are formed from this material, water must be present when solar systems, including our own, come into existence. The water in our oceans and lakes may have come initially from water locked into the rocky material that accreted to form Earth. Alternatively, the water may have been brought to Earth when asteroids and comets (formed from the same cloud that made the planets) later impacted it. Scientists estimate that one comet impact every thousand years during Earth’s first billion years would have been enough to account for the water we see today. Of course, both sources may have contributed to the water we now enjoy drinking and swimming in.

Any interstellar grains that are incorporated into newly forming stars (instead of the colder planets and smaller bodies around them) will be destroyed by their high temperatures. But eventually, each new generation of stars will evolve to become red giants, with stellar winds of their own. Some of these stars will also become supernovae and explode. Thus, the process of recycling cosmic material can start all over again.