We shift our attention now to small worlds in the more distant parts of the solar system. Saturn’s large moon Titan turns out to be a weird cousin of Earth, with many similarities in spite of frigid temperatures. The Cassini observations of Titan have provided some of the most exciting recent discoveries in planetary science. Neptune’s moon Triton also has unusual characteristics and resembles Pluto, which we will discuss in the following section.

Titan, a Moon with Atmosphere and Hydrocarbon Lakes

Titan, first seen in 1655 by the Dutch astronomer Christiaan Huygens, was the first moon discovered after Galileo saw the four large moons of Jupiter. Titan has roughly the same diameter, mass, and density as Callisto or Ganymede. Presumably it also has a similar composition—about half ice and half rock. However, Titan is unique among moons, with a thick atmosphere and lakes and rivers and falling rain (although these are not composed of water but of hydrocarbons such as ethane and methane, which can stay liquid at the frigid temperatures on Titan). 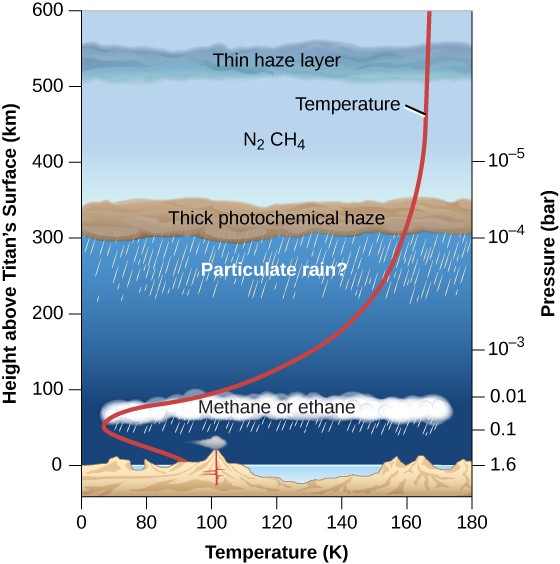 Also detected in Titan’s atmosphere were carbon monoxide (CO), hydrocarbons (compounds of hydrogen and carbon) such as methane (CH4), ethane (C2H6), and propane (C3H8), and nitrogen compounds such as hydrogen cyanide (HCN), cyanogen (C2N2), and cyanoacetylene (HC3N). Their presence indicates an active chemistry in which sunlight interacts with atmospheric nitrogen and methane to create a rich mix of organic molecules. There are also multiple layers of hydrocarbon haze and clouds in the atmosphere, as illustrated in Figure 1.

These Voyager discoveries motivated a much more ambitious exploration program using the NASA Cassini Saturn orbiter and a probe to land on Titan called Huygens, built by the European Space Agency. The orbiter, which included several cameras, spectrometers, and a radar imaging system, made dozens of close flybys of Titan between 2004 and 2015, each yielding radar and infrared images of portions of the surface (see Exploring the Outer Planets). The Huygens probe successfully descended by parachute through the atmosphere, photographing the surface from below the clouds, and landing on January 14, 2005. This was the first (and so far the only) spacecraft landing on a moon in the outer solar system.

At the end of its parachute descent, the 319-kilogram Huygens probe safely touched down, slid a short distance, and began sending data back to Earth, including photos and analyses of the atmosphere. It appeared to have landed on a flat, boulder-strewn plain, but both the surface and the boulders were composed of water ice, which is as hard as rock at the temperature of Titan (see Figure 2).

The photos taken during descent showed a variety of features, including drainage channels, suggesting that Huygens had landed on the shore of an ancient hydrocarbon lake. The sky was deep orange, and the brightness of the Sun was a thousand times less than sunlight on Earth (but still more than a hundred times brighter than under the full moon on Earth). Titan’s surface temperature was 94 K (−179 °C). The warmer spacecraft heated enough of the ice where it landed for its instruments to measure released hydrocarbon gas. Measurements on the surface continued for more than an hour before the probe succumbed to the frigid temperature. 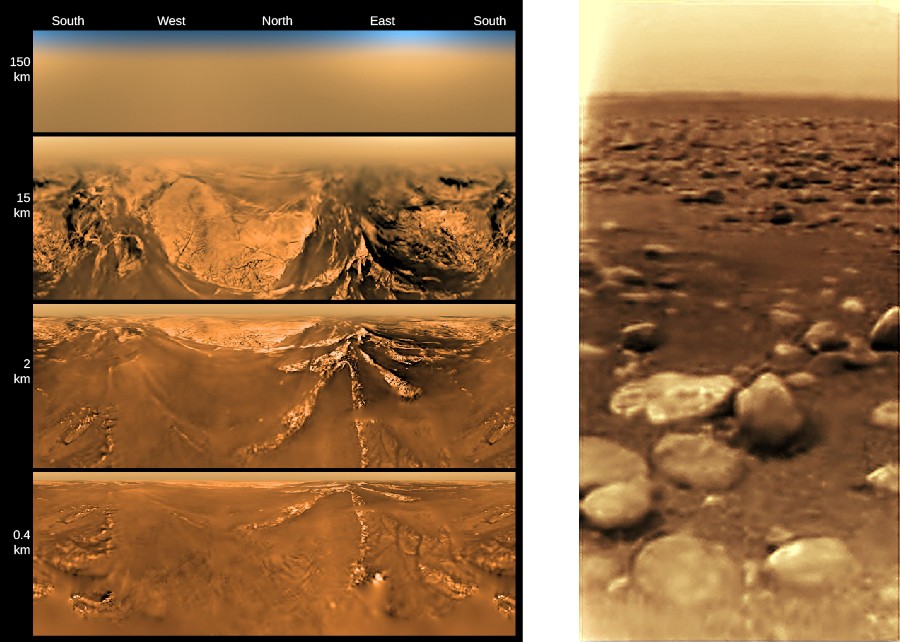 Figure 2: Views of the Surface of Titan. The left image shows the views of Titan from the descent camera, in a flattened projection, at different altitudes. The right image, taken after landing, shows a boulder-strewn surface illuminated by faint reddish sunlight. The boulders are composed of water ice. (credit left: modification of work by ESA/NASA/JPL/University of Arizona; credit right: modification of work by ESA/NASA/JPL/University of Arizona; processed by Andrey Pivovarov)

Radar and infrared imaging of Titan from the Cassini orbiter gradually built up a picture of a remarkably active surface on this moon, complex and geologically young (Figure 3). There are large methane lakes near the polar regions that interact with the methane in the atmosphere, much as Earth’s water oceans interact with the water vapor in our atmosphere. The presence of many erosional features indicates that atmospheric methane can condense and fall as rain, then flow down valleys to the big lakes. Thus, Titan has a low-temperature equivalent of the water cycle on Earth, with liquid on the surface that evaporates, forms clouds, and then condenses to fall as rain—but on Titan the liquid is a combination of methane, ethane, and a trace of other hydrocarbons. It is a weirdly familiar and yet utterly alien landscape. 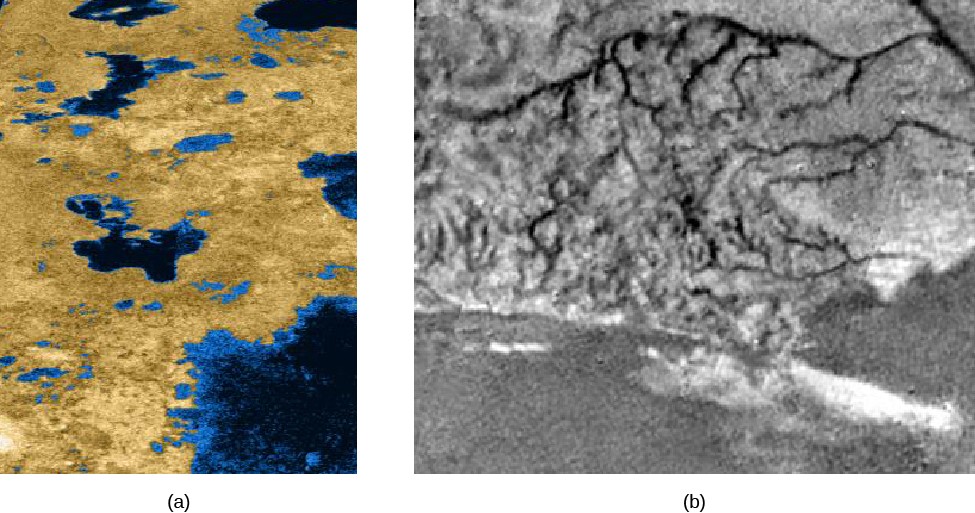 Figure 3: Titan’s Lakes. (a) This Cassini image from a September 2006 flyby shows the liquid lakes on Titan. Their composition is most likely a combination of methane and ethane. (Since this is a radar image, the colors are artificially added. The dark blue areas are the smooth surfaces of the liquid lakes, and yellow is the rougher solid terrain around them.) (b) This mosaic of Titan’s surface from the Cassini-Huygens mission shows in detail a high ridge area and many narrow, sinuous erosion channels that appear to be part of a widespread network of “rivers” carved by flowing hydrocarbons. (credit a: modification of work by NASA/JPL-Caltech/USGS; credit b; modification of work by NASA/JPL/ESA/University of Arizona)

These discoveries raise the question of whether there could be life on Titan. Hydrocarbons are fundamental for the formation of the large carbon molecules that are essential to life on our planet. However, the temperature on Titan is far too low for liquid water or for many of the chemical processes that are essential to life as we know it. There remains, though, an intriguing possibility that Titan might have developed a different form of low-temperature carbon-based life that could operate with liquid hydrocarbons playing the role of water. The discovery of such “life as we don’t know it” could be even more exciting than finding life like ours on Mars. If such a truly alien life is present on Titan, its existence would greatly expand our understanding of the nature of life and of habitable environments.

The Cassini mission scientists and the visual presentation specialists at NASA’s Jet Propulsion Laboratory have put together some nice films from the images taken by Cassini and Huygens. See, for example, the Titan approach and the flyover of the Northern lakes district.

Triton and Its Volcanoes 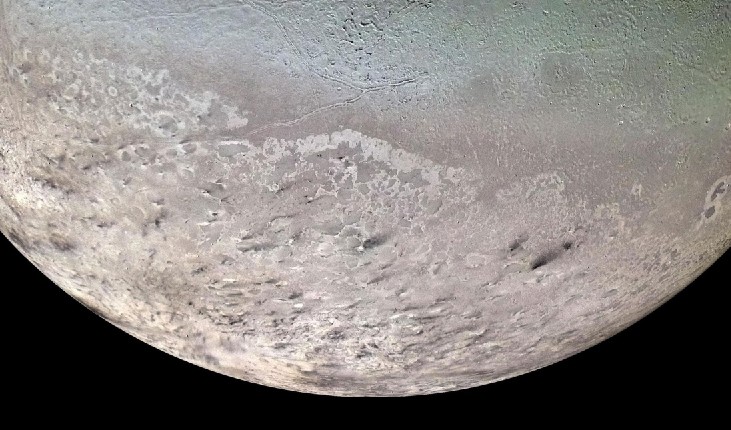 Figure 4: Neptune’s Moon Triton. This mosaic of Voyager 2 images of Triton shows a wide range of surface features. The pinkish area at the bottom is Triton’s large southern polar cap. The south pole of Triton faces the Sun here, and the slight heating effect is driving some of the material northward, where it is colder. (credit: modification of work by NASA/JPL/USGS)

Neptune’s largest moon Triton (don’t get its name confused with Titan) has a diameter of 2720 kilometers and a density of 2.1 g/cm3, indicating that it’s probably composed of about 75% rock mixed with 25% water ice. Measurements indicate that Triton’s surface has the coldest temperature of any of the worlds our robot representatives have visited. Because its reflectivity is so high (about 80%), Triton reflects most of the solar energy that falls on it, resulting in a surface temperature between 35 and 40 K.

The surface material of Triton is made of frozen water, nitrogen, methane, and carbon monoxide. Methane and nitrogen exist as gas in most of the solar system, but they are frozen at Triton’s temperatures. Only a small quantity of nitrogen vapor persists to form an atmosphere. Although the surface pressure of this atmosphere is only 16 millionths of a bar, this is sufficient to support thin haze or cloud layers.

Triton’s surface, like that of many other moons in the outer solar system, reveals a long history of geological evolution (Figure 4). Although some impact craters are found, many regions have been flooded fairly recently by the local version of “lava” (perhaps water or water-ammonia mixtures). There are also mysterious regions of jumbled or mountainous terrain. 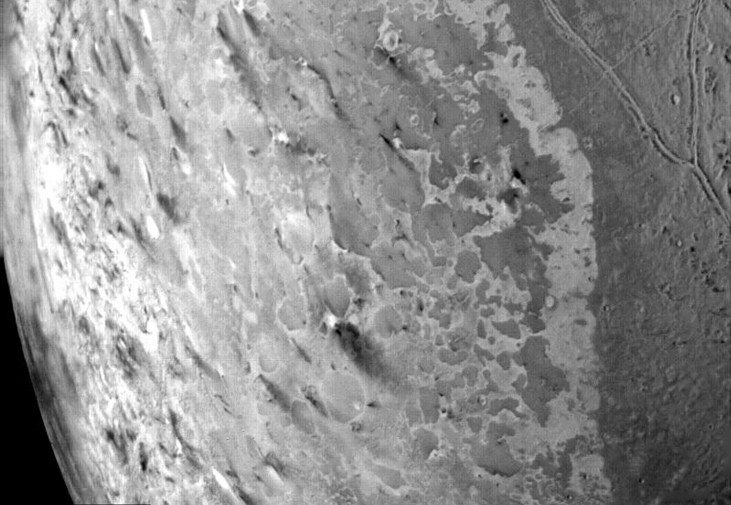 Figure 5: Triton’s Geysers. This close-up view shows some of the geysers on Neptune’s moon Triton, with the long trains of dust pointing to the lower right in this picture. (credit: modification of work by NASA/JPL)

The Voyager flyby of Triton took place at a time when the moon’s southern pole was tipped toward the Sun, allowing this part of the surface to enjoy a period of relative warmth. (Remember that “warm” on Triton is still outrageously colder than anything we experience on Earth.) A polar cap covers much of Triton’s southern hemisphere, apparently evaporating along the northern edge. This polar cap may consist of frozen nitrogen that was deposited during the previous winter.

Remarkably, the Voyager images showed that the evaporation of Triton’s polar cap generates geysers or volcanic plumes of nitrogen gas (see Figure 5). (Fountains of such gas rose about 10 kilometers high, visible in the thin atmosphere because dust from the surface rose with them and colored them dark.) These plumes differ from the volcanic plumes of Io in their composition and also in that they derive their energy from sunlight warming the surface rather than from internal heat.

Saturn’s moon Titan has an atmosphere that is thicker than that of Earth. There are lakes and rivers of liquid hydrocarbons, and evidence of a cycle of evaporation, condensation, and return to the surface that is similar to the water cycle on Earth (but with liquid methane and ethane). The Cassini-Huygens lander set down on Titan and showed a scene with boulders, made of water ice, frozen harder than rock. Neptune’s cold moon Triton has a very thin atmosphere and nitrogen gas geysers.