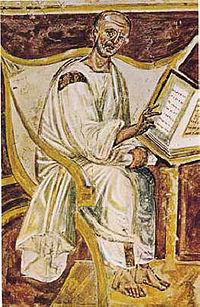 In contrast to the Classical Period, which saw tremendous growth and innovation in the study of communication, the Medieval Period might be considered the dark ages of academic study in our field. During this era, the Greco-Roman culture was dominated by Christian influence after the fall of the Roman Empire. The church felt threatened by secular rhetorical works they considered full of pagan thought. While the church preserved many of the classical teachings of rhetoric, it made them scarce to those not in direct service to the church. A secular education was extremely hard to obtain during the Medieval Period for almost everyone.

One of the most recognizable people from this era was Augustine (354 CE-430 CE), a Christian clergyman and renowned rhetorician who actually argued for the continued development of ideas that had originated during the Classical Period. He thought that the study of persuasion, in particular, was a particularly worthwhile pursuit for the church. Augustine was a teacher by trade and used his teaching skills as well as knowledge of communication to move “men” toward truth, which for him was the word of God (Baldwin).

With the exception of Augustine, the formal study of communication took a back seat to a focus on theological issues during the Medieval Period. Fortunately, the study of communication managed to survive as one of the seven branches of a liberal education during this period, but it remained focused on developing presentational styles apt for preaching. Boethius and the Archbishop Isidore of Seville made small efforts to preserve classical learning by reviving the works of Cicero and Quintilian to persuade people to be just and good. Nevertheless, aside from Augustine’s work, little progress was made during the remaining Medieval years; the formal study of communication literally plunged into the “dark ages” before reemerging during the Renaissance.