Powered by a new intellectual movement during this period, secular institutions and governments started to compete with the church for personal allegiances. As more people felt comfortable challenging the church’s approach to education, reinvigorated attention to classical learning and fresh opportunities for scholarly education reemerged. As with the two previous periods we’ve examined, obtaining education for women was still tough, as many social limitations continued to restrict their access to knowledge.

Teaching and Learning Communication Then

Laura Cereta: “Defense of the Liberal Instruction of Women”

The following is an excerpt of a letter by Cereta to Bibulus Sempronius written January 13, 1488. In an earlier correspondence he praised her as a woman of intelligence but insulted her as if she was unique among women. This is part of her impassioned response and defense of the education of women. 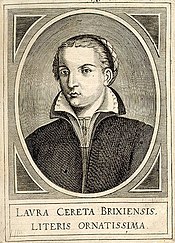 “All history is full of such examples. My point is that your mouth has grown foul because you keep it sealed so that no arguments can come out of it that might enable you to admit that nature imparts one freedom to all human beings equally – to learn. But the question of my exceptionality remains. And here choice alone, since it is the arbiter of character, is the distinguishing factor. For some women worry about the styling of their hair, the elegance of their clothes, and the pearls and other jewelry they wear on their fingers. Others love to say cute little things, to hide their feelings behind a mask of tranquility, to indulge in dancing, and to lead pet dogs around on a leash. For all I care, other women can long for parties with carefully appointed tables, for the peace of mind of sleep, or they can yearn to deface with paint the pretty face they see reflected in their mirrors. But those women for whom the quest for the good represents a higher value restrain their young spirits and ponder better plans. They harden their bodies with sobriety and toil, they control their tongues, they carefully monitor what they hear, they ready their minds for all-night vigils, and they rouse their minds for the contemplation of probity in the case of harmful literature. For knowledge is not given as a gift but by study. For a mind free, keen, and unyielding in the face of hard work always rises to the good, and the desire for learning grows in the depth and breadth.

So be it therefore. May we women, then, not be endowed by God the grantor with any giftedness or rare talent through any sanctity of our own. Nature has granted to all enough of her bounty; she opens to all the gates of choice, and through these gates, reason sends legates to the will, for it is through reason that these legates transmit desires. I shall make a bold summary of the matter. Yours is the authority, ours is the inborn ability. But instead of manly strength, we women are naturally endowed with cunning, instead of a sense of security, we are naturally suspicious. Down deep we women are content with our lot. But you, enraged and maddened by the anger of the dog from whom you flee, are like someone who has been frightened by the attack of a pack of wolves. The victor does not look for the fugitive; nor does she who desires a cease-fire with the enemy conceal herself. Nor does she set up camp with courage and arms when the conditions are hopeless. Nor does it give the strong any pleasure to pursue one who is already fleeing” (Robin 78-9).

Despite the continued oppression, several brave women took advantage of the changes brought in by the Renaissance. Christine de Pisan (1365-1429) has been praised as “Europe’s first professional woman writer” writing 41 pieces over a 30-year period (Redfern 74). Her most famous work, The Treasure of the Cities of Ladies, provided instruction to women on how they could achieve their potential and create for themselves lives rich in meaning and importance. According to Redfern, while “she neither calls herself a rhetorician nor calls The Treasure a rhetoric, her instruction has the potential to empower women’s speech acts in both public and private matters. Her most important lesson is that women’s success depends on their ability to manage and mediate by speaking and writing effectively” (Redfern 74).

Italian born Laura Cereta (1469-1499) initiated intellectual debates with her male counterparts through letter writing. Yet, given the difficulties women had earning recognition in the educational arena, many of her letters went unanswered (Rabil). Despite these obstacles, she continued her education with diligence and is considered one of the earliest feminists. Through her letters, she questioned women’s traditional roles and attempted to persuade many to alter their beliefs about the role of women and education.

Ideas surrounding issues of style in speaking situations received significant attention during the Renaissance period. Petrus Ramus (1515-1572) paid great attention to the idea of style by actually grouping style and delivery of the five canons together. Ramus also argued that invention and arrangement did not fit the canon and should be the focus of logic, not rhetoric. Ramus, who often questioned the early scholars, believed that being a good man had nothing to do with being a good speaker and didn’t think that focusing on truth had much to do with communication at all. Needless to say, he had a way of making a name for himself by challenging much of what early scholars thought of truth, ethics, and morals as they applied to communication.

In contrast to Ramus, Francis Bacon (1561-1626), a contemporary of Shakespeare, believed that the journey to truth was paramount to the study and performance of communication. According to Bacon, reason and morality required speakers to have a high degree of accountability, making it an essential element in oration. Where do you think ethics, truth, and morality fit into communication today? Think about your concept of politicians or car salespersons. How do these notions fit when communicating in these contexts?

Scholars like Cereta, de Pisan, Ramus, and Bacon all furthered the study of communication as they challenged, debated, and scrutinized well established assumptions and “truths” about the field developed during the Classical Period. Their works reflect the dynamic nature of the Renaissance Period and the reemergence of discussion and deliberation regarding the nature and uses of communication. The works of these scholars were a springboard back into a full-blown examination of communication, which continued into The Enlightenment.