Machaut is an extremely significant composer who was equally comfortable in sacred and secular worlds. His Messe de Nostre Dame is the first complete setting of the Ordinary of the mass by a single composer that has survived. He served as a high-ranking church official in the service of various kings and nobles. He also composed courtly poetry and polyphonic songs that are the clear descendants of the troubadour song of previous centuries. 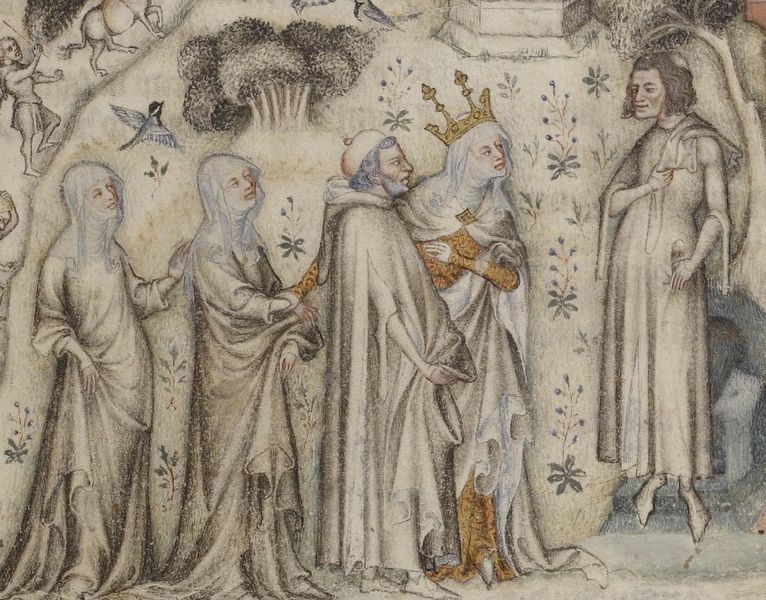 Figure 1. Machaut (at right) receiving Nature and three of her children. From an illuminated Parisian manuscript of the 1350s

Guillaume de Machaut (sometimes spelled Machault; c. 1300–April 1377) was a medieval French poet and composer. He is one of the earliest composers on whom significant biographical information is available. According to Daniel Leech-Wilkinson, Machaut was “the last great poet who was also a composer.” Well into the fifteenth century, Machaut’s poetry was greatly admired and imitated by other poets, including Geoffrey Chaucer.

Machaut composed in a wide range of styles and forms. He is a part of the musical movement known as the ars nova. Machaut helped develop the motet and secular song forms (particularly the lai and the formes fixes: rondeau, virelai and ballade). Machaut wrote the Messe de Nostre Dame, the earliest known complete setting of the Ordinary of the Mass attributable to a single composer.

Guillaume de Machaut was born about 1300, and educated in the region around Reims. His surname most likely derives from the nearby town of Machault, 30 km northeast of Reims in theArdennes region. He was employed as secretary to John I, Count of Luxembourg and King of Bohemia from 1323 to 1346, and also became a canon (1337). He often accompanied King John on his various trips, many of them military expeditions around Europe (including Prague). He was named the canon of Verdun in 1330, Arras in 1332, and Reims in 1337. By 1340, Machaut was living in Reims, having relinquished his other canonic posts at the request of Pope Benedict XII. In 1346, King John was killed fighting at the Battle of Crécy, and Machaut, who was famous and much in demand, entered the service of various other aristocrats and rulers, including King John’s daughter Bonne (who died of the Black Death in 1349), her sons Jean de Berry and Charles (later Charles V, Duke of Normandy), and others such as Charles II of Navarre.

Machaut survived the Black Death that devastated Europe, and spent his later years living in Reims composing and supervising the creation of his complete-works manuscripts. His poem Le voir dit (probably 1361–1365) purports to recount a late love affair with a 19-year-old girl, Péronne d’Armentières, although the accuracy of the work as autobiography is contested. When he died in 1377, other composers such as François Andrieu wrote elegies lamenting his death.

Other than his Latin motets of a religious nature and some poems invoking the horrors of war and captivity, the vast majority of Machaut’s lyric poems reflect the conventions of courtly love, and involve statements of service to a lady and the poet’s pleasure and pains. In technical terms, Machaut was a master of elaborate rhyme schemes, and this concern makes him a precursor to the Grands Rhétoriqueurs of the 15th century.Guillaume de Machaut’s lyric output comprises around 400 poems, including 235 ballades, 76 rondeaux, 39 virelais, 24 lais, 10 complaintes, and 7chansons royales, and Machaut did much to perfect and codify these fixed forms. Some of his lyric output is embedded in his narrative poems or “dits,” such as Le remède de fortune (“The Cure of Ill Fortune”) which includes one of each genre of lyric poetry, and Le voir dit (“A True Story”), but most are included in a separate, unordered section entitled Les loanges des dames. That the majority of his lyrics are not set to music (in manuscripts, music and non-music sections are separate) suggests that he normally wrote the text before setting some to music.

Guillaume de Machaut’s narrative output is dominated by the “dit” (literally “spoken,” i.e. a poem not meant to be sung). These first-person narrative poems (all but one are written in octosyllabic rhymed couplets, like the romance, or “roman” of the same period) follow many of the conventions of the Roman de la rose, including the use of allegorical dreams (songes), allegorical characters, and the situation of the narrator-lover attempting to return toward or satisfy his lady.

Machaut is also the author of a poetic chronicle of the chivalric deeds of Peter I of Cyprus, (the Prise d’Alexandrie), and of poetic works of consolation and moral philosophy. His unusual self-reflective usage of himself (as his lyrical persona) as the narrator of his dits gleans some personal philosophical insights as well.

At the end of his life, Machaut wrote a poetic treatise on his craft (his Prologue). This reflects on his conception of the organization of poetry into set genres and rhyme schemes, and the ordering of these genres into distinct sections of manuscripts. This preoccupation with ordering his oeuvre is reflected in an index to MS A entitled “Vesci l’ordonance que G. de Machaut veut qu’il ait en son livre” (“Here is the order that G. de Machaut wants his book to have”).

Machaut’s poetry had a direct effect on the works of Eustache Deschamps, Jean Froissart, Christine de Pizan, René d’Anjou and Geoffrey Chaucer, among many others.

The poem below, Puis qu’en oubli, is his 18th rondeau.

As a composer of the fourteenth century, Machaut’s secular song output includes monophonic lais and virelais, which continue, in updated forms, some of the tradition of the troubadours. He also worked in the polyphonic forms of the ballade and rondeau and wrote the first complete setting of the Ordinary of the Mass which can be attributed to a single composer.

The lyrics of Machaut’s works almost always dealt with courtly love. A few works exist to commemorate a particular event, such as M18, “Bone Pastor/Bone Pastor/Bone Pastor.” Machaut mostly composed in five genres: the lai, the virelai, the motet, the ballade, and the rondeau. In these genres, Machaut retained the basic formes fixes, but often utilized creative text setting and cadences. For example, most rondeau phrases end with a long melisma on the penultimate syllable. However, a few of Machaut’s rondeaux, such as R18 “Puis qu’en oubli,” are mostly syllabic in treatment.

Machaut’s motets often contain sacred texts in the tenor, such as in M12 “Corde mesto cantando/Helas! pour quoy virent/Libera me”. The top two voices in these three-part compositions, in contrast, sing secular French texts, creating interesting concordances between the sacred and secular. In his other genres, though, he does not utilize sacred texts.

Machaut’s cyclic setting of the Mass, identified in one source as the Messe de Nostre Dame (“Mass of Our Lady”), was composed in the early 1360s probably for Rheims Cathedral. While not the first cyclic mass—the Tournai Mass is earlier—it was the first by a single composer and conceived as a unit. Machaut probably was familiar with the Tournai Mass since Machaut’s Mass shares many stylistic features with it, including textless interludes.

Whether or not Machaut’s mass is indeed cyclic is contested; after lengthy debate, musicologists are still deeply divided. However, the mass can be said to be stylistically consistent, and certainly the chosen chants are all celebrations of Mary, the mother of Jesus. Also adding weight to the claim that the mass is cyclic is the possibility that the piece was written or assembled for performance at a specific celebration. The possibility that it was for the coronation of Charles V, which was once widely accepted, is thought unlikely in modern scholarship. The composer’s intention that the piece be performed as one entire mass setting makes the Messe de Nostre Dame generally considered a cyclic composition.