Another prominent instrumental genre that originates in the Classical era is the string quartet. String quartets were the most popular genre of chamber music in the Classical era and are always written for the same four instruments: two violins, one viola, and one cello. As with the Symphony, Haydn plays a critical role in elevating the genre to the position of prominence it enjoyed in the 18th century and beyond. 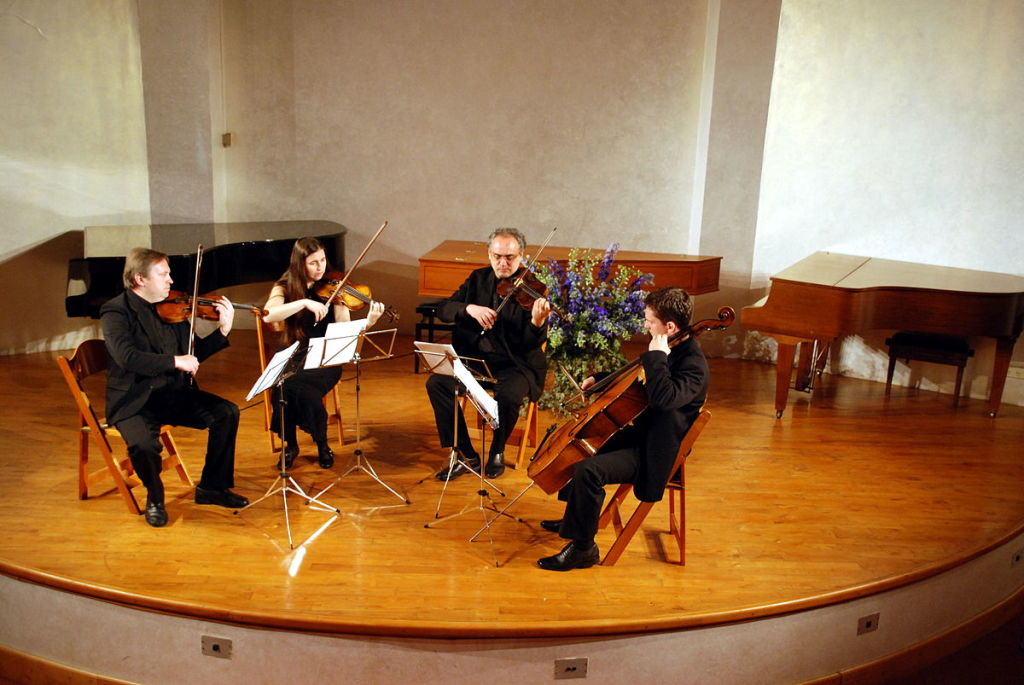 Figure 1. A string quartet in performance. From left to right—violin 1, violin 2, viola, cello

A string quartet is a musical ensemble of four string players—two violin players, a viola player and a cellist—or a piece written to be performed by such a group. The string quartet is one of the most prominent chamber ensembles in classical music, with most major composers, from the mid to late 18th century onwards, writing string quartets.

The string quartet was developed into its current form by the Austrian composer Joseph Haydn, with his works in the 1750s establishing the genre. Ever since Haydn’s day the string quartet has been considered a prestigious form and represents one of the true tests of the composer’s art. With four parts to play with, a composer working in anything like the classical key system has enough lines to fashion a full argument, but none to spare for padding. The closely related characters of the four instruments, moreover, while they cover in combination an ample compass of pitch, do not lend themselves to indulgence in purely colouristic effects. Thus, where the composer of symphonies commands the means for textural enrichment beyond the call of his harmonic discourse, and where the concerto medium offers the further resource of personal characterization and drama in the individual-pitted-against-the-mass vein, the writer of string quartets must perforce concentrate on the bare bones of musical logic. Thus, in many ways the string quartet is pre-eminently the dialectical form of instrumental music, the one most naturally suited to the activity of logical disputation and philosophical enquiry.

Quartet composition flourished in the Classical era, with Mozart, Beethoven and Schubert following Haydn in each writing a number of quartets. A slight slackening in the pace of quartet composition occurred in the later 19th century, in part due to a movement away from classical forms by composers such as Liszt, Wagner and Richard Strauss, though it received a resurgence in the 20th with the Second Viennese School, Bartók, Shostakovich and Elliot Carter producing highly regarded examples of the genre. In the 21st century it remains an important and refined musical form.

Some quartets play together for many years in ensembles which may be named after the first violinist (e.g. the Takács Quartet), a composer (e.g. the Borodin Quartet) or a location (e.g. the Budapest Quartet). Well-known string quartets can be found in the list of string quartet ensembles.

If the notion of Joseph Haydn as the “Father of the Symphony” needs serious qualification, his status as the father of the string quartet remains unchallenged, and the early history of the string quartet is in many ways the history of Haydn’s journey with the genre. Not that he composed the first quartet of all: before Haydn alighted on the genre there had been several spasmodic examples of divertimenti for two solo violins, viola and cello by Viennese composers such as Wagenseil and Holzbauer; and there had long been a tradition of performing orchestral works with one instrument to a part. Wyn Jones cites the widespread practice of playing works written for string orchestra, such as divertimenti and serenades, with just four players, one to a part, there being no separate (fifth) contabasso part in string scoring before the 19th century. However, these composers showed no interest in exploring the development of the string quartet as a medium.

The origins of the string quartet can be further traced back to the Baroque trio sonata, in which two solo instruments performed with acontinuo section consisting of a bass instrument (such as the cello) and keyboard. A very early example is a four-part sonata for string ensemble by Gregorio Allegri (1582–1652) that might be considered an important prototype string quartet. By the early 18th century, composers were often adding a third soloist; and moreover it became common to omit the keyboard part, letting the cello support the bass line alone. Thus when Alessandro Scarlatti wrote a set of six works entitled “Sonata à Quattro per due Violini, Violetta [viola], e Violoncello senza Cembalo” (Sonata for four instruments: two violins, viola, and cello without harpsichord), this was a natural evolution from the existing tradition. 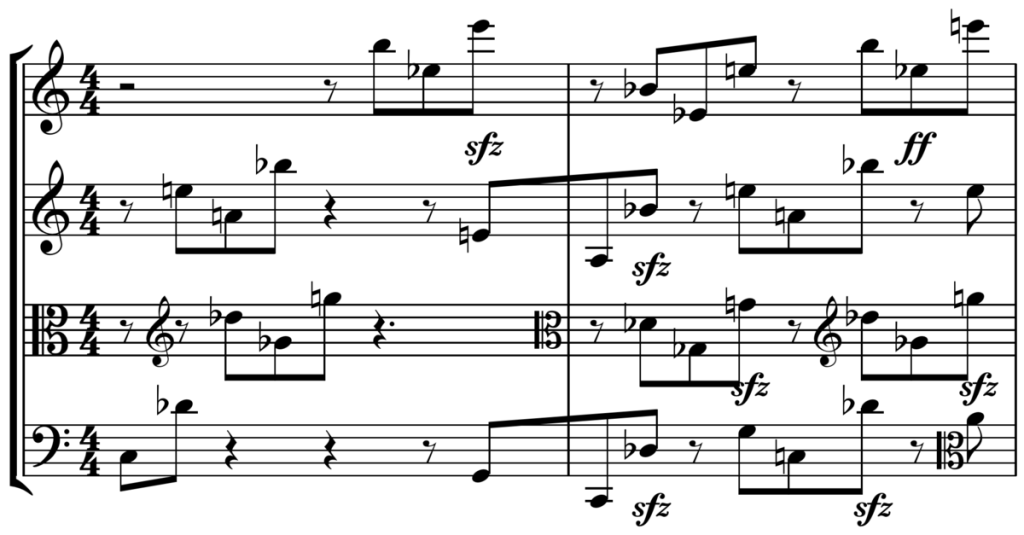 The string quartet in its now accepted form came about with Haydn. If the combination of two violins, viola and cello was not unknown before Haydn, when it occurred in chamber music it was more likely through circumstance than conscious design; certainly the sting quartet enjoyed no recognized status as an ensemble in the way that two violins with basso continuo – the so-called ‘trio sonata’ – had for more than a hundred years. Even the composition of Haydn’s earliest string quartets owed more to chance than artistic imperative. During the 1750s, when the young composer was still working mainly as a teacher and violinist in Vienna, he would occasionally be invited to spend time at the nearby castle of one Baron Carl von Joseph Edler von Fürnberg. There he would play chamber music in an ad hoc ensemble consisting of Fürnberg’s steward, a priest and a local cellist, and when the Baron asked for some new music for the group to play, Haydn’s first string quartets were born. It is not clear whether any of these works ended up in the two sets published in the mid-1760s and known as Haydn’s Opp.1 and 2 (‘Op.0’ is a quartet included in some early editions of Op.1, and only rediscovered in the 1930s), but it seems reasonable to assume that they were similar in character.

The following purely chance circumstance had led him to try his luck at the composition of quartets. A Baron Fürnberg had a place in Weinzierl, several stages from Vienna, and he invited from time to time his pastor, his manager, Haydn, and Albrechtsberger (a brother of the celebrated contrapuntist Albrechtsberger) in order to have a little music. Fürnberg requested Haydn to compose something that could be performed by these four amateurs. Haydn, then eighteen years old, took up this proposal, and so originated his first quartet which, immediately it appeared, received such general approval that Haydn took courage to work further in this form.

Haydn went on to write nine other quartets around this time. These works were published as his Op. 1 and Op. 2; one quartet went unpublished, and some of the early “quartets” are actually symphonies missing their wind parts. They have five movements and take the form: fast movement, minuet and trio I, slow movement, minuet and trio II, and fast finale. As Finscher notes, they draw stylistically on the Austrian divertimento tradition.

After these early efforts Haydn did not return to the string quartet for several years, but when he did so, it was to make a significant step in the genre’s development. The intervening years saw Haydn begin his lifelong employment as Kapellmeister to the Esterhazy princes, for who he was required to compose numerous symphonies and dozens of trios for violin, viola and the curious bass instrument called the baryton (played by Prince Nikolaus Esterhazy himself). The opportunities for experiment which both these genres offered Haydn perhaps helped him in the pursuit of the more advanced quartet style found in the eighteen worked published in the early 1770s as Opp.9, 17 and 20. These are written in a form that became established as standard both for Haydn and for other composers. Clearly composed as sets, these quartets feature a four-movement layout with more broadly conceived, moderately paced first movements and, in increasing measure, a democratic and conversational interplay of parts, close-knit thematic development, and skilful though often self-effacing use of counterpoint. The convincing realizations of the progressive aims of the Op.20 set, in particular, makes them the first major peak in the history of the string quartet. Certainly they offered to their own time state-of-the art models to follow for the best part of a decade; the teenage Mozart, in his early quartets, was among the composers moved to imitate many of their characteristics, right down to the vital fugues with which Haydn sought to bring greater architectural weight to the finales of nos. 2, 5 and 6.

After Op.20 it becomes harder to point to similar major jumps in the string quartet’s development in Haydn’s hands, though not due to any lack of invention or application on the composer’s part. As Donald Tovey put it: “with Op.20 the historical development of Haydn’s quartets reaches its goal; and further progress is not progress in any historical sense, but simply the difference between one masterpiece and the next.”

Ever since Haydn’s day the string quartet has been prestigious and considered one of the true tests of a composer’s art. This may be partly because the palette of sound is more restricted than with orchestral music, forcing the music to stand more on its own rather than relying on tonal color; or from the inherently contrapuntal tendency in music written for four equal instruments.

Quartet composition flourished in the Classical era, with Mozart, Beethoven and Schubert each writing a number of quartets to set alongside Haydn’s. Beethoven in particular is credited with developing the genre in an experimental and dynamic fashion, especially in his later series of quartets written in the 1820s up until his death. Their forms and ideas inspired and continue to inspire musicians and composers, such as Richard Wagner and Béla Bartok. Schubert’s last musical wish was to hear Beethoven’s Op.131 in C♯ minor quartet, which he did on 14 November 1828, just five days before his death. Upon listening to an earlier performance of this quartet, Schubert had remarked, “After this, what is left for us to write?” Wagner, when reflecting on Op. 131’s first movement, said that it “reveals the most melancholy sentiment expressed in music”. Of the late quartets, Beethoven cited his own favorite as Op. 131, which he saw as his most perfect single work.

A slight slackening in the pace of quartet composition occurred in the 19th century; here, composers often wrote only one quartet, perhaps to show that they could fully command this hallowed genre, although Antonín Dvořák wrote a series of 14. With the onset of the Modern era of classical music, the quartet returned to full popularity among composers, and played a key role in the development of Arnold Schoenberg, Béla Bartók, and Dmitri Shostakovich especially. After the Second World War, some composers, such as Pierre Boulez and Olivier Messiaen questioned the relevance of the string quartet and avoided writing them. However, from the 1960s onwards, many composers have shown a renewed interest in the genre. During his tenure as Master of the Queen’s Music, Peter Maxwell Davies produced a set of ten entitled the Naxos Quartets (to a commission from Naxos Records) from 2001–2007.

A composition for four players of stringed instruments may be in any form. Quartets written in the classical period usually have four movements with a large-scale structure similar to that of a symphony:

Substantial modifications to the typical structure were already achieved in Beethoven’s later quartets, and despite some notable examples to the contrary, composers writing in the twentieth century increasingly abandoned this structure.

Some of the most popular or widely acclaimed works for string quartet include:

Whereas individual string players often group together to make ad hoc string quartets, others continue to play together for many years in ensembles which may be named after the first violinist (e.g. the Takács Quartet), a composer (e.g. the Borodin Quartet) or a location (e.g. the Budapest Quartet). Established quartets may undergo changes in membership whilst retaining their original name. Well-known string quartets can be found in the list of string quartet ensembles.