This page article provides an excellent overview of one of Berlioz’s best known works, Symphonie Fantastique. I encourage you to read through the description of each of the movements of the piece, but of course the one that will be most important for you in our class is the description of the 5th and final movement, as that is the piece on our playlist. Try listening to the piece while you review the outline of the fifth movement, to see if you can hear all the unusual orchestral effects described there.

Symphonie fantastique: Épisode de la vie d’un artiste . . . en cinq parties (Fantastical Symphony: An Episode in the Life of an Artist, in Five Parts) Op. 14 is a program symphony written by the French composer Hector Berlioz in 1830. It is an important piece of the early Romantic period, and is popular with concert audiences worldwide. The first performance was at the Paris Conservatoire in December 1830. The work was repeatedly revived after 1831 and subsequently became a favourite in Paris.

Leonard Bernstein described the symphony as the first musical expedition into psychedelia because of its hallucinatory and dream-like nature, and because history suggests Berlioz composed at least a portion of it under the influence of opium. According to Bernstein, “Berlioz tells it like it is. You take a trip, you wind up screaming at your own funeral.”

In 1831, Berlioz wrote a lesser known sequel to the work, Lélio, for actor, orchestra and chorus. Franz Liszt made a piano transcription of the symphony in 1833 (S.470).

The symphony is a piece of program music that tells the story of an artist gifted with a lively imagination who has poisoned himself with opium in the depths of despair because of hopeless love. Berlioz provided his own program notes for each movement of the work (see below). He prefaces his notes with the following instructions:

The composer’s intention has been to develop various episodes in the life of an artist, in so far as they lend themselves to musical treatment. As the work cannot rely on the assistance of speech, the plan of the instrumental drama needs to be set out in advance. The following programme must therefore be considered as the spoken text of an opera, which serves to introduce musical movements and to motivate their character and expression.

There are five movements, instead of the four movements that were conventional for symphonies at the time: 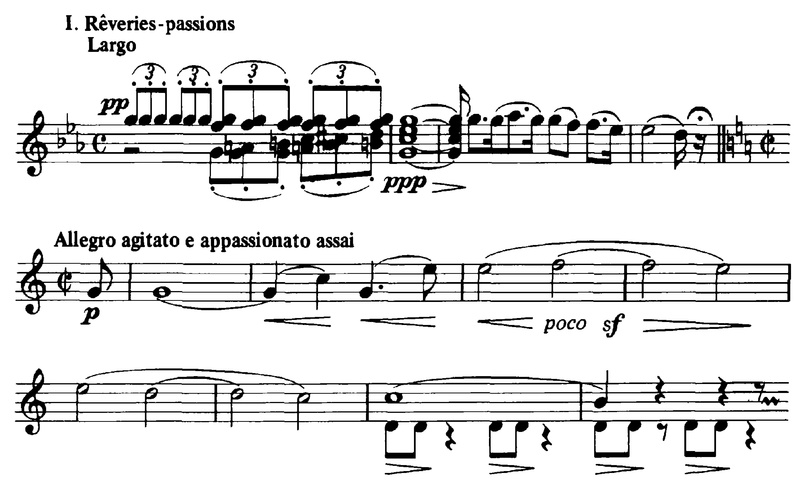 In Berlioz’s own program notes from 1845, he writes:

The author imagines that a young musician, afflicted by the sickness of spirit which a famous writer has called the vagueness of passions [le vague des passions], sees for the first time a woman who unites all the charms of the ideal person his imagination was dreaming of, and falls desperately in love with her. By a strange anomaly, the beloved image never presents itself to the artist’s mind without being associated with a musical idea, in which he recognises a certain quality of passion, but endowed with the nobility and shyness which he credits to the object of his love.

This melodic image and its model keep haunting him ceaselessly like a double idée fixe. This explains the constant recurrence in all the movements of the symphony of the melody which launches the first allegro. The transitions from this state of dreamy melancholy, interrupted by occasional upsurges of aimless joy, to delirious passion, with its outbursts of fury and jealousy, its returns of tenderness, its tears, its religious consolations—all this forms the subject of the first movement.

“The first movement is radical in its harmonic outline, building a vast arch back to the home key; while similar to the sonata form of the classical period, Parisian critics regarded this as unconventional. It is here that the listener is introduced to the theme of the artist’s beloved, or the idée fixe. Throughout the movement there is a simplicity in the way melodies and themes are presented, which Robert Schumann likened to ‘Beethoven’s epigrams’ ideas that could be extended had the composer chosen to. In part, it is because Berlioz rejected writing the more symmetrical melodies then in academic fashion, and instead looked for melodies that were ‘so intense in every note as to defy normal harmonization’, as Schumann put it. -Hector Berlioz: The Complete Guide The theme itself was taken from Berlioz’s scène lyrique “Herminie”, composed in 1828.

The artist finds himself in the most diverse situations in life, in the tumult of a festive party, in the peaceful contemplation of the beautiful sights of nature, yet everywhere, whether in town or in the countryside, the beloved image keeps haunting him and throws his spirit into confusion.

The second movement has a mysterious-sounding introduction that creates an atmosphere of impending excitement, followed by a passage dominated by two harps; then the flowing waltz theme appears, derived from the idée fixe at first, then transforming it. More formal statements of the idée fixe twice interrupt the waltz.

The movement is the only one to feature the two harps, providing the glamour and sensual richness of the ball, and may also symbolise the object of the young man’s affection. Berlioz wrote extensively in his memoirs of his trials and tribulations in having this symphony performed, due to a lack of capable harpists and harps, especially in Germany.

Another feature of this movement is that Berlioz added a part for solo cornet to his autograph score, although it was not included in the score published in his lifetime. The work has most often been played and recorded without the solo cornet part. Conductors Jean Martinon, Sir Colin Davis, Otto Klemperer, Gustavo Dudamel, and Leonard Slatkin have employed this part for cornet in performances of the symphony.

One evening in the countryside he hears two shepherds in the distance dialoguing with their “ranz des vaches”; this pastoral duet, the setting, the gentle rustling of the trees in the wind, some causes for hope that he has recently conceived, all conspire to restore to his heart an unaccustomed feeling of calm and to give to his thoughts a happier colouring. He broods on his loneliness, and hopes that soon he will no longer be on his own . . . But what if she betrayed him! . . . This mingled hope and fear, these ideas of happiness, disturbed by dark premonitions, form the subject of the adagio. At the end one of the shepherds resumes his ‘ranz des vaches’; the other one no longer answers. Distant sound of thunder . . . solitude . . . silence.

The two “shepherds” Berlioz mentions in the notes are depicted with a cor anglais(English horn) and an offstage oboe tossing an evocative melody back and forth. After the cor anglais–oboe conversation, the principal theme of the movement appears on solo flute and violins. Berlioz salvaged this theme from his abandoned Messe solennelle. The idée fixe returns in the middle of the movement, played by oboe and flute. The sound of distant thunder at the end of the movement is a striking passage for four timpani.

Convinced that his love is unappreciated, the artist poisons himself with opium. The dose of narcotic, while too weak to cause his death, plunges him into a heavy sleep accompanied by the strangest of visions. He dreams that he has killed his beloved, that he is condemned, led to the scaffold and is witnessing his own execution. As he cries for forgiveness the effects of the narcotic set in. He wants to hide but he cannot so he watches as an onlooker as he dies. The procession advances to the sound of a march that is sometimes sombre and wild, and sometimes brilliant and solemn, in which a dull sound of heavy footsteps follows without transition the loudest outbursts. At the end of the march, the first four bars of the idée fixe reappear like a final thought of love interrupted by the fatal blow when his head bounced down the steps.

Berlioz claimed to have written the fourth movement in a single night, reconstructing music from an unfinished project—the opera Les francs-juges. The movement begins with timpani sextuplets in thirds, for which he directs: “The first quaver of each half-bar is to be played with two drumsticks, and the other five with the right hand drumsticks.” The movement proceeds as a march filled with blaring horns and rushing passages, and scurrying figures that later show up in the last movement. Before the musical depiction of his execution, there is a brief, nostalgic recollection of the idée fixe in a solo clarinet, as though representing the last conscious thought of the soon-to-be-executed man. Immediately following this is a single, short fortissimo G minor chord—the fatal blow of the guillotine blade, followed by a series of pizzicato notes representing the rolling of the severed head into the basket. After his death, the final nine bars of the movement contain a victorious series of G major brass chords, along with rolls of the snare drums within the entire orchestra, seemingly intended to convey the cheering of the onlooking throng.

He sees himself at a witches’ sabbath, in the midst of a hideous gathering of shades, sorcerers and monsters of every kind who have come together for his funeral. Strange sounds, groans, outbursts of laughter; distant shouts which seem to be answered by more shouts. The beloved melody appears once more, but has now lost its noble and shy character; it is now no more than a vulgar dance tune, trivial and grotesque: it is she who is coming to the sabbath. . . . Roar of delight at her arrival. . . . She joins the diabolical orgy . . . The funeral knell tolls, burlesque parody of the Dies irae, the dance of the witches. The dance of the witches combined with the Dies irae.

This movement can be divided into sections according to tempo changes:

There are a host of effects, including eerie col legno in the strings—the bubbling of the witches’ cauldron to the blasts of wind. The climactic finale combines the somber Dies Irae melody with the wild fugue of the Ronde du Sabbat.

The aim of the second kind of imitation, as we have said before, is to reproduce the intonations of the passions and the emotions, and even to trace a musical image, or metaphor, of objects that can only be seen. The continual interruption of the Dies irae motif by the strings symbolizes this continual fight of death until the movement and piece eventually, as we all do given in to the Dies irae theme and our eventual but necessary deaths.

Emotional (imitation) is designed to arouse in us by means of sound the notion of the several passions of the heart, and to awaken solely through the sense of hearing the impressions that human beings experience only through the other senses. Such is the goal of expression, depiction or musical metaphors.

As part of this he uses an example of cyclical structure—an idea drawn from Beethoven’s use of similar rhythmic structures in his Fifth Symphony, and the idea of musical “cycles”, such as a “song cycle.” Berlioz did not know of Mendelssohn’s Octet, which also uses this device.