It is more convenient to be able to put all of these values into the calculator at the same time rather than writing intermediate steps. We will learn to do that in this course, but that’s not the point of this lesson. The point here is to practice making graphs. This will be useful to you in checking your work when you evaluate formulas. If one of the values you compute doesn’t seem to fit the pattern of the others, that warns you to check your computation again. 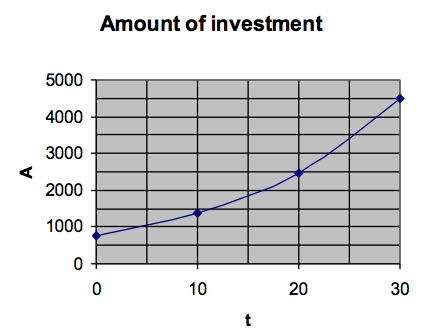 This is as close as we could reasonably expect from using a graph to approximate the input value.

Consider our approximation from Example 2. We wanted to find the number of years to leave the money in so that the amount of the investment would be $4000. The graph suggested that [latex]t=27.5[/latex] years. But then we found that after 27.5 years, the amount was only $3857.68. Clearly we should leave the money in somewhat longer.  How much longer?

Following Example 3, suppose we want to allow the initial amount of the investment to change. So we need a variable for that. Since it is an amount, we’d like to call it A, but we already have an A in this formula that means something else. We could use a different letter, but in applications problems we often choose to call both values A and distinguish between them by a subscript. In this problem, we would usually call the original amount of money [latex]{{A}_{0}}[/latex] and the final amount of money after t years [latex]{{A}_{t}}[/latex]. So the formula is   [latex]{{A}_{t}}={{A}_{0}}\cdot{{\left(1+\frac{r}{n}\right)}^{n\cdot{t}}}[/latex]. Use this formula to find the amount of an investment after 6 years if the initial amount is $900, the annual rate is 0.07 and it is compounded twice a year.