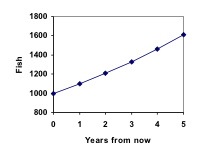 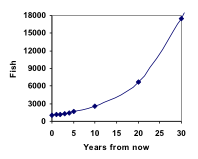 Adding these values to our graph reveals a shape that is definitely not linear. If our fish population had been growing linearly, by 100 fish each year, the population would have only reached 4000 in 30 years compared to almost 18000 with this percent-based growth, called exponential growth.

If your calculator does not have a general root button, all is not lost. You can instead use the property of exponents which states that . So, to compute the 3rd root of 8, you could use your calculator’s exponent key to evaluate . To do this, type:

The number of users on a social networking site was 45 thousand in February when they officially went public, and grew to 60 thousand by October. If the site is growing exponentially, and growth continues at the same rate, how many users should then expect two years after they went public? 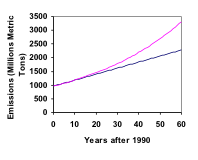