We want to investigate the relationship between temperature Centigrade and temperature Fahrenheit in order to take temperatures from a news broadcast in Canada (in Centigrade) and convert them to temperatures that are easy for US citizens to understand (in Fahrenheit.) We already know the formula for that and we know how to find points, plot them, and draw a graph.   (See Topic C: Formulas.)

Here, the temperature Centigrade is the input value and the temperature Fahrenheit is the output value. The formula is [latex]F=1.8\cdot{C}+32[/latex] and following is a table of values and a graph. 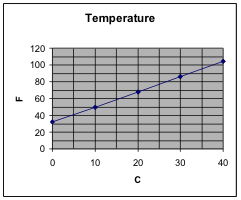 There are several more pairs of points from our table of values that you could easily try. Try some of those and see if you get the same slope each time.

Recall from algebra class that lines which are slanted down have negative slope and those slanted up have positive slope. One important method of checking your work in computing the slope is to be sure that your graphs and algebra give results that are consistent with that.