In algebra class, we learned that the y-intercept of a graph is the value on the y-axis when x = 0. That is easy to find using the formula for the line, because we only have to plug in x = 0 and find y.

When we look at the graph for this formula, go to C = 0, and find the point on the graph above that, the y-value appears to be about a little bit above 30. To find a more precise estimate from the graph, we’d need a bigger graph. This is consistent with the value of 32 that we found algebraically. Understanding both of these provides a way of checking your work on either of them.

The formula for the line

Notice that both the slope and the y-intercept appear in the formula for the line. In algebra class, you learned that

For the temperature example, since F is the output value and C is the input value, and [latex]F=1.8\cdot{C}+32[/latex], then we see from the formula that the slope is 1.8 and the y-intercept is 32.

Interpret the slope and intercept

To find a point that fits this relationship, choose any value for the input variable.   (Generally we choose a value that is easy to compute with and to graph, such as a small whole number.)   Let’s begin by choosing [latex]d=2[/latex]. Then compute the output value.

Now choose two other values for d and use them to compute the output values. In the interests of saving space, we will omit the details.

Since these two slopes aren’t equal, these three points are not on a straight line. 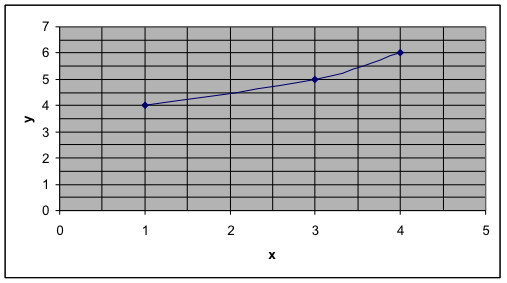