1. What are the two variables? And what are their units?

3. Is a linear model appropriate? 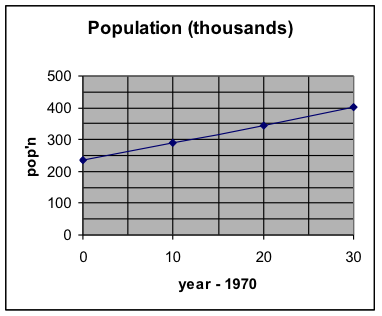 The graph clearly indicates that a linear model is appropriate for this population growth over this time period.

Interpret the slope, using the units of the numbers in the problem:

For each year that goes by, population will increase by 5.55 thousand people.

5. Write the formula for the linear relationship:

7. Use the formula to make the requested prediction.   Write the result in a sentence, with units.

So, in 2010, the model predicts that the population will be 456 thousand people.

8. Sketch a graph from the original problem information, use it to estimate the answers to the prediction questions, and determine whether your answers from the algebraic formula are reasonable.

We take the same graph as before and extend it to the right so that we can estimate a population value for x = 40. 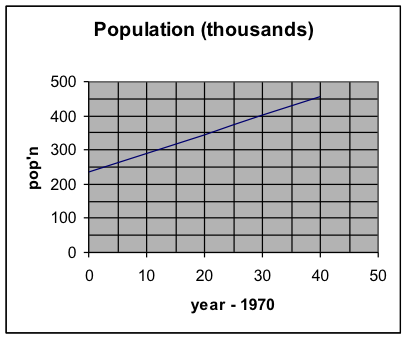 The value we see from the graph is approximately 450 thousand people. That is consistent with the value we obtained from the formula.

The prediction is reasonable.