Doubling time and half-life: In an exponential model, equal steps in the input variable will always increase (or decrease) the value of the output variable by the same percentage. When the input variable is time, it is often useful to describe the process by how long it takes for the output to double (for growth) or decline to half (for decay) — these are called the “doubling time” or “half-life”. These values can be estimated from the graph of the model by taking the y value in the model that is furthest from zero, drawing a horizontal line at half that height, then noting the difference between the x values of the original point and the point where the half-height line crosses the graph of the model. 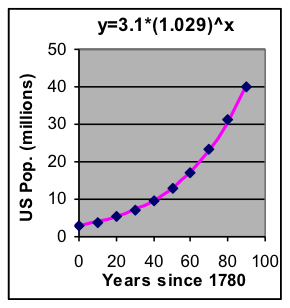 Comments on this solution: Notice that the model predicts a population of 10 million at about x=40, then 20 million at about x=65, then 40 million at about x=90 — this shows that the doubling time of 25 years is the same for different parts of the graph (this is true only for exponential models). Using the highest point graphed on the model makes it easier to estimate the coordinates (estimating the x position for y=5 would be harder, for example). For a decaying-exponential model, we still use the highest point but it is the first point on the left, so the time to the half-height point is a half-life rather than a doubling time.

Convergence to zero: Exponential decay models have a negative “growth” rate, so that at each step the output becomes smaller by a fixed percentage. This leads to output values that come closer and closer to zero but never quite reach it. But the difference from zero can quickly become small enough to be negligible for practical purposes—a process whose output value decreases by half every hour will be less than a ten-millionth of its original size a day later. Notice that if the initial value is negative, this convergence to zero is from below the x-axis, with increasing values of y that come closer and closer.

Unbounded growth: Exponential growth models become very large surprisingly quickly. This is because each increase causes later increases to be larger (since at each step the rate of increase depends on the current amount). An investment with a 7.2% annual return will double to 10 years, then redouble each decade to reach 1000 times the original value in a century. Under favorable conditions, bacteria can reproduce (and thus double their numbers) about every 30 minutes, leading to a million-fold increase in ten hours. The process by which scientists amplify the genetic material DNA so that it can be detected chemically doubles the number of DNA fragments every 2 minutes, leading in less than an hour to about 30 million copies of each original piece. Most explosions start with exponential growth, as each small reaction causes several others, which in turn each cause more, and so on. Notice that if the initial value is negative, the unbounded growth can be in a negative direction.

Such growth processes can not continue indefinitely. Although there are many natural processes that show exponential growth at certain stages, the steady build-up of the speed of exponential growth ensures that some limit (often exhaustion of some essential resource) is reached sooner or later. This should be kept in mind when modeling—data often show a pattern that will not continue.