Negative output values in exponential models: When the initial amount is a negative number (this usually happens when the y value describes a difference from a reference value), the only difference is that all of the model’s output values will be negative and the graphs will thus be reflected around the x-axis, “upside down” compared to models with positive initial values.

Put this dataset into the exponential-model spreadsheet, then adjust the parameters to make the model fit the data. You will find that the data is well matched by an exponential model whose initial-value parameter is -40 and whose “growth” rate is -0.09 (which is really a decay rate since it is negative).

Evaluating the model for x = 20 gives a predicted difference at that time of 6.1 degrees below the room temperature of 75°F.

The data point whose y value is furthest from zero is the first one at (x=0, y=-40). The line halfway to the x-axis is at y=–20, which crosses the model graph at between 7 and 8 minutes. 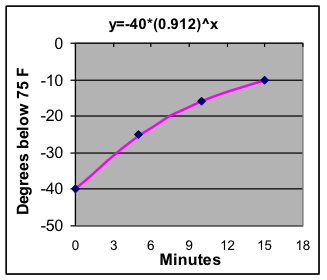 This is why the same mathematical formula can be used for both growth and decay—the difference is just whether the base that is used is larger or smaller than 1.

Tip on fitting exponential models by hand: If you get strange results in an exponential-modeling problem, check to see if you have made the rate too large (perhaps by entering a percentage without a percent character where a decimal was expected). This causes particularly dramatic errors when a negative number is entered, since attempting to raise a negative number to a fractional power will cause the spreadsheet to show an error message.