Marco is a collector of antique soda bottles. His collection currently contains 437 bottles. Every year, he budgets enough money to buy 32 new bottles. Can we determine how many bottles he will have in 5 years, and how long it will take for his collection to reach 1000 bottles?

While both of these questions you could probably solve without an equation or formal mathematics, we are going to formalize our approach to this problem to provide a means to answer more complicated questions.

We have answered the question of how many bottles Marco will have in 5 years. However, solving how long it will take for his collection to reach 1000 bottles would require a lot more calculations.

While recursive relationships are excellent for describing simply and cleanly how a quantity is changing, they are not convenient for making predictions or solving problems that stretch far into the future. For that, a closed or explicit form for the relationship is preferred. An explicit equation allows us to calculate P­n directly, without needing to know P­n-1. While you may already be able to guess the explicit equation, let us derive it from the recursive formula. We can do so by selectively not simplifying as we go:

You can probably see the pattern now, and generalize that

Using this equation, we can calculate how many bottles he’ll have after 5 years: 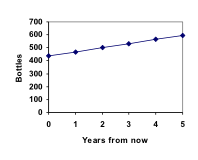 If a quantity starts at size P­0 and grows by d every time period, then the quantity after n time periods can be determined using either of these relations:

In this equation, d represents the common difference – the amount that the population changes each time n increases by 1

Connection to prior learning – slope and intercept

You may recognize the common difference, d, in our linear equation as slope. In fact, the entire explicit equation should look familiar – it is the same linear equation you learned in algebra, probably stated as y = mx + b.

In the standard algebraic equation y = mx + b, b was the y-intercept, or the y value when x was zero. In the form of the equation we’re using, we are using P­0­ to represent that initial amount.

In the y = mx + b equation, recall that m was the slope. You might remember this as “rise over run”, or the change in y divided by the change in x. Either way, it represents the same thing as the common difference, d, we are using – the amount the output Pn changes when the input n increases by 1.

The equations y = mx + b and P­n = P­0 + d n mean the same thing and can be used the same ways, we’re just writing it somewhat differently.

Alternatively, you can use the slope formula from algebra to determine the common difference, noting that the population is the output of the formula, and time is the input.

Gasoline consumption in the US has been increasing steadily. Consumption data from 1992 to 2004 is shown below[1]. Find a model for this data, and use it to predict consumption in 2016. If the trend continues, when will consumption reach 200 billion gallons?

Plotting this data, it appears to have an approximately linear relationship:

While there are more advanced statistical techniques that can be used to find an equation to model the data, to get an idea of what is happening, we can find an equation by using two pieces of the data – perhaps the data from 1993 and 2003. 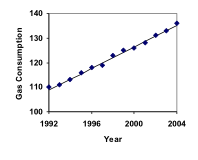 Calculating values using the explicit form and plotting them with the original data shows how well our model fits the data.

We can now use our model to make predictions about the future, assuming that the previous trend continues unchanged. To predict the gasoline consumption in 2016:

Our model predicts that the US will consume 161.6 billion gallons of gasoline in 2016 if the current trend continues.

To find when the consumption will reach 200 billion gallons, we would set P­n = 200, and solve for n:

The cost, in dollars, of a gym membership for n months can be described by the explicit equation P­n = 70 + 30n. What does this equation tell us?

The value for P­0 in this equation is 70, so the initial starting cost is $70. This tells us that there must be an initiation or start-up fee of $70 to join the gym.

The value for d in the equation is 30, so the cost increases by $30 each month. This tells us that the monthly membership fee for the gym is $30 a month.

When using mathematical models to predict future behavior, it is important to keep in mind that very few trends will continue indefinitely.

Suppose a four year old boy is currently 39 inches tall, and you are told to expect him to grow 2.5 inches a year.

We can set up a growth model, with n = 0 corresponding to 4 years old.

So at 6 years old, we would expect him to be

Any mathematical model will break down eventually. Certainly, we shouldn’t expect this boy to continue to grow at the same rate all his life. If he did, at age 50 he would be

When using any mathematical model, we have to consider which inputs are reasonable to use. Whenever we extrapolate, or make predictions into the future, we are assuming the model will continue to be valid.