The final worksheet should look similar to this: 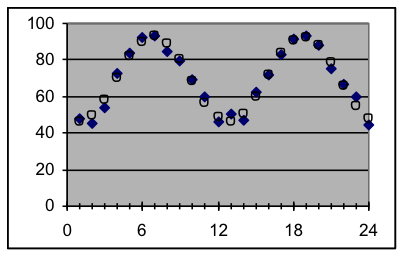 Cycles: There is a close relationship between sinusoids and rotation. A spinning object repeats its sequence of positions every rotation, and the height of a point on a circle rotating at a constant speed varies over time according to a sinusoidal pattern. The wavelength of this sinusoid equals the rotation time of the circle, and the amplitude equals the radius of the circle. The phase is how long it has been since the point last passed the midpoint in an upward direction. The baseline is the height of the center of the circle.

Left-right shifts of the sinusoidal pattern: The standard sinusoid crosses the y axis where the curve has the steepest upward slope, where it is increasing past the average value. But the curve can be shifted right or left so that it crosses the y axis at some other point of the cycle. The distance from the nearest standard steepest-slope point to the actual crossing point is called the phase or the phase shift of the sinusoid. The phase shift is added to the x value before it is used inside the SIN function.

Two sinusoidal processes with the same wavelength can be in phase, in which case they will add together if they apply to the same measurement, or be out of phase, in which case there may be partial cancellation. Some­times phase shifts are talked about in terms of angular degrees (e.g., “The electric and magnetic waves are 90 degrees out of phase”); this is based on taking a wavelength as being 360 degrees due to the analogy with rotation), so a phase shift of 90° means a phase shift of ¼ of the wavelength.