In the next 4 questions, estimate the values by making reasonable approximations for unknown values, or by doing some research to find reasonable values.

For the next set of problems, research or make educated estimates for any unknown quantities needed to answer the question.

Info for the breadcrumbs question 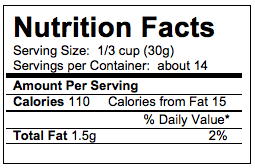 How much breadcrumbs does the recipe call for?

It calls for 1½ cups of breadcrumbs.

How many meatloaves does the recipe make?

How many servings does that recipe make?

It says it serves 8.

How big is the canister?

It is cylindrical, 3.5 inches across and

What is the net weight of the contents of 1 canister?

How much does a cup of breadcrumbs weigh?

I’m not sure, but maybe something from the nutritional label will help.

What kind of car is that?

How big is that car / what are the dimensions? Here is some details from MSN autos:

How much of the car was covered with caps?

Everything but the windows and the underside.

How big is a bottle cap?

Caps are 1 inch in diameter.

How much chicken will you be buying?

How far are the two stores?

What kind of mileage does your car get?

It averages about 24 miles per gallon in the city.

How many gallons does your car hold?

How much is gas?

How efficient is the current furnace?

It is a 60% efficient furnace.

How efficient is the new furnace?

What is your gas bill?

Here is the history for 2 years: 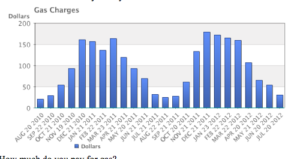 How much do you pay for gas?

How much gas do you use?

Here is the history for 2 years: 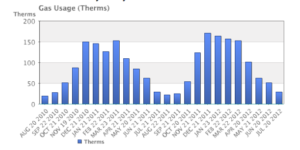 How much does the new furnace cost?

How long do you plan to live in the house?

How much water does Janine drink in a day?

She normally drinks 3 bottles a day, each 16.9 ounces.

How much does a bottle of water cost?

How much does a reusable water bottle cost?

How long does a reusable water bottle last?

Basically forever (or until you lose it).

How much does a water filter cost? How much water will they filter?

Where does Marcus currently drive? He:

How will he get to these locations without a car?

How much does gas cost?

How much does he pay for insurance and maintenance?

How much is he paying for the car?

What mileage does his car get?

About 26 miles per gallon on average.

How much does a bus ride cost?

How much does a ZipCar rental cost?

When taxes are not given as a fixed percentage rate, sometimes it is necessary to calculate the effective rate.

The effective tax rate is the equivalent percent rate of the tax paid out of the dollar amount the tax is based on.

A progressive tax increases the percent rate as the base amount increases.

A regressive tax decreases the percent rate as the base amount increases.

Many people have proposed various revisions to the income tax collection in the United States. Some, for example, have claimed that a flat tax would be fairer. Others call for revisions to how different types of income are taxed, since currently investment income is taxed at a different rate than wage income.

The following two projects will allow you to explore some of these ideas and draw your own conclusions.

Imagine the country is made up of 100 households. The federal government needs to collect $800,000 in income taxes to be able to function. The population consists of 6 groups:

This scenario is roughly proportional to the actual United States population and tax needs. We are going to determine new income tax rates.

The first proposal we’ll consider is a flat tax – one where every income group is taxed at the same percentage tax rate.

2) Determine what flat tax rate would be necessary to collect enough money.

The second proposal we’ll consider is a modified flat-tax plan, where everyone only pays taxes on any income over $20,000. So, everyone in group A will pay no taxes. Everyone in group B will pay taxes only on $9,000.

3) Determine the total taxable income for the whole population

5) Complete this table for both the plans

7) Discretionary income is the income people have left over after paying for necessities like rent, food, transportation, etc. The cost of basic expenses does increase with income, since housing and car costs are higher, however usually not proportionally. For each income group, estimate their essential expenses, and calculate their discretionary income. Then compute the effective tax rate for each plan relative to discretionary income rather than income.

Visit www.irs.gov, and download the most recent version of forms 1040, and schedules A, B, C, and D.

Scenario 1: Calculate the taxes for someone who earned $60,000 in standard wage income (W-2 income), has no dependents, and takes the standard deduction.

Scenario 2: Calculate the taxes for someone who earned $20,000 in standard wage income, $40,000 in qualified dividends, has no dependents, and takes the standard deduction. (Qualified dividends are earnings on certain investments such as stocks.)

Scenario 3: Calculate the taxes for someone who earned $60,000 in small business income, has no dependents, and takes the standard deduction.

Based on these three scenarios, what are your impressions of how the income tax system treats these different forms of income (wage, dividends, and business income)?

Scenario 4: To get a more realistic sense for calculating taxes, you’ll need to consider itemized deductions. Calculate the income taxes for someone with the income and expenses listed below.