If you have ever spun a bike wheel or pushed a merry-go-round, you know that force is needed to change angular velocity as seen in Figure 1. In fact, your intuition is reliable in predicting many of the factors that are involved. For example, we know that a door opens slowly if we push too close to its hinges. Furthermore, we know that the more massive the door, the more slowly it opens. The first example implies that the farther the force is applied from the pivot, the greater the angular acceleration; another implication is that angular acceleration is inversely proportional to mass. These relationships should seem very similar to the familiar relationships among force, mass, and acceleration embodied in Newton’s second law of motion. There are, in fact, precise rotational analogs to both force and mass. 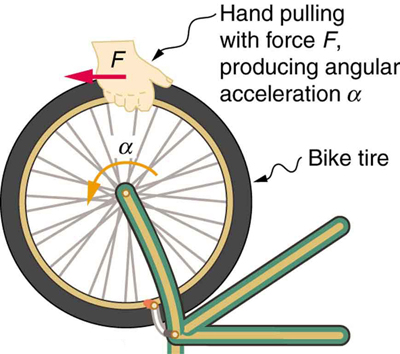 To develop the precise relationship among force, mass, radius, and angular acceleration, consider what happens if we exert a force F on a point mass m that is at a distance r from a pivot point, as shown in Figure 2. Because the force is perpendicular to r, an acceleration[latex]a=\frac{F}{m}[/latex] is obtained in the direction of F. We can rearrange this equation such that F = ma and then look for ways to relate this expression to expressions for rotational quantities. We note that a = rα, and we substitute this expression into F = ma, yielding

Recall that torque is the turning effectiveness of a force. In this case, because F is perpendicular to r, torque is simply τ = Fr. So, if we multiply both sides of the equation above by r, we get torque on the left-hand side. That is, 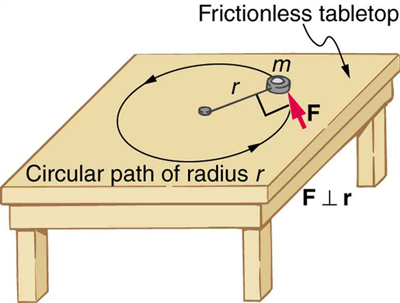 Figure 2. An object is supported by a horizontal frictionless table and is attached to a pivot point by a cord that supplies centripetal force. A force F is applied to the object perpendicular to the radius r, causing it to accelerate about the pivot point. The force is kept perpendicular to r.

Rotational Inertia and Moment of Inertia

Before we can consider the rotation of anything other than a point mass like the one in Figure 2, we must extend the idea of rotational inertia to all types of objects. To expand our concept of rotational inertia, we define the moment of inertiaI of an object to be the sum of mr2 for all the point masses of which it is composed. That is, [latex]I=\sum{\text{mr}}^{2}[/latex]. Here I is analogous to m in translational motion. Because of the distance r, the moment of inertia for any object depends on the chosen axis. Actually, calculating I is beyond the scope of this text except for one simple case—that of a hoop, which has all its mass at the same distance from its axis. A hoop’s moment of inertia around its axis is therefore MR2, where M is its total mass and R its radius. (We use M and R for an entire object to distinguish them from m and r for point masses.) In all other cases, we must consult Figure 3 (note that the table is piece of artwork that has shapes as well as formulae) for formulas for I that have been derived from integration over the continuous body. Note that I has units of mass multiplied by distance squared (kg⋅m2), as we might expect from its definition.

The general relationship among torque, moment of inertia, and angular acceleration is

where net τ is the total torque from all forces relative to a chosen axis. For simplicity, we will only consider torques exerted by forces in the plane of the rotation. Such torques are either positive or negative and add like ordinary numbers. The relationship in net τ = Iα, [latex]\alpha =\frac{\text{net}{\tau}}{I}[/latex] is the rotational analog to Newton’s second law and is very generally applicable. This equation is actually valid for any torque, applied to any object, relative to any axis.

Cut out a circle that has about a 10 cm radius from stiff cardboard. Near the edge of the circle, write numbers 1 to 12 like hours on a clock face. Position the circle so that it can rotate freely about a horizontal axis through its center, like a wheel. (You could loosely nail the circle to a wall.) Hold the circle stationary and with the number 12 positioned at the top, attach a lump of blue putty (sticky material used for fixing posters to walls) at the number 3. How large does the lump need to be to just rotate the circle? Describe how you can change the moment of inertia of the circle. How does this change affect the amount of blue putty needed at the number 3 to just rotate the circle? Change the circle’s moment of inertia and then try rotating the circle by using different amounts of blue putty. Repeat this process several times. 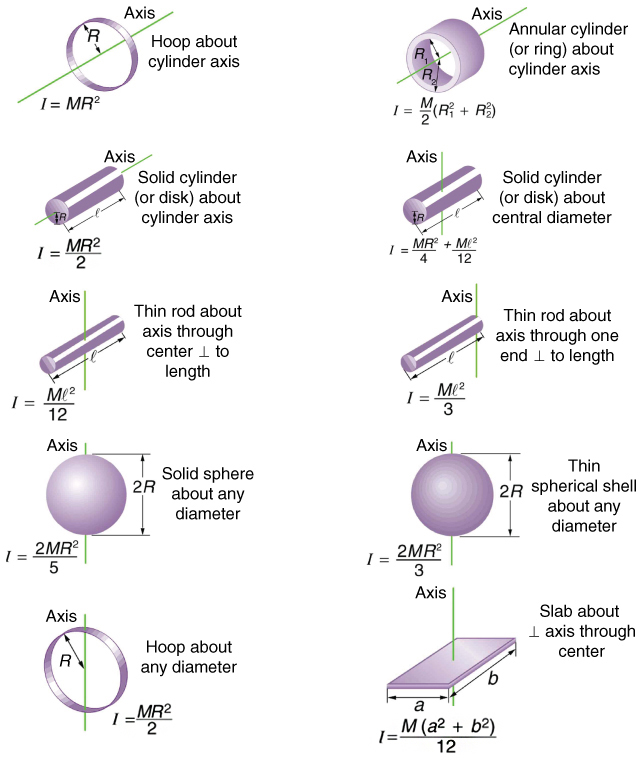 Example 1. Calculating the Effect of Mass Distribution on a Merry-Go-Round 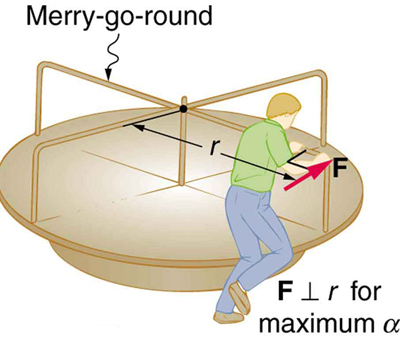 Figure 4. A father pushes a playground merry-go-round at its edge and perpendicular to its radius to achieve maximum torque.

Angular acceleration is given directly by the expression [latex]\alpha =\frac{\text{net}\tau}{I}[/latex]:

To solve for α, we must first calculate the torque τ (which is the same in both cases) and moment of inertia I (which is greater in the second case). To find the torque, we note that the applied force is perpendicular to the radius and friction is negligible, so that

Now, after we substitute the known values, we find the angular acceleration to be

The total moment of inertia is the sum of moments of inertia of the merry-go-round and the child (about the same axis). To justify this sum to yourself, examine the definition of I:

Substituting known values into the equation for α gives

The angular acceleration is less when the child is on the merry-go-round than when the merry-go-round is empty, as expected. The angular accelerations found are quite large, partly due to the fact that friction was considered to be negligible. If, for example, the father kept pushing perpendicularly for 2.00 s, he would give the merry-go-round an angular velocity of 13.3 rad/s when it is empty but only 8.89 rad/s when the child is on it. In terms of revolutions per second, these angular velocities are 2.12 rev/s and 1.41 rev/s, respectively. The father would end up running at about 50 km/h in the first case. Summer Olympics, here he comes! Confirmation of these numbers is left as an exercise for the reader.

No. Torque depends on three factors: force magnitude, force direction, and point of application. Moment of inertia depends on both mass and its distribution relative to the axis of rotation. So, while the analogies are precise, these rotational quantities depend on more factors.

1. The moment of inertia of a long rod spun around an axis through one end perpendicular to its length is ML2/3. Why is this moment of inertia greater than it would be if you spun a point mass M at the location of the center of mass of the rod (at L/2)? (That would be ML2/4.) 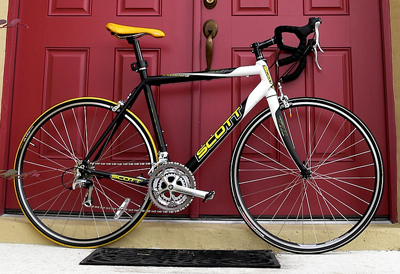 1. This problem considers additional aspects of Example 1: Calculating the Effect of Mass Distribution on a Merry-Go-Round. (a) How long does it take the father to give the merry-go-round an angular velocity of 1.50 rad/s? (b) How many revolutions must he go through to generate this velocity? (c) If he exerts a slowing force of 300 N at a radius of 1.35 m, how long would it take him to stop them?

2. Calculate the moment of inertia of a skater given the following information. (a) The 60.0-kg skater is approximated as a cylinder that has a 0.110-m radius. (b) The skater with arms extended is approximately a cylinder that is 52.5 kg, has a 0.110-m radius, and has two 0.900-m-long arms which are 3.75 kg each and extend straight out from the cylinder like rods rotated about their ends.

3. The triceps muscle in the back of the upper arm extends the forearm. This muscle in a professional boxer exerts a force of 2.00 × 103 N with an effective perpendicular lever arm of 3.00 cm, producing an angular acceleration of the forearm of 120 rad/s2. What is the moment of inertia of the boxer’s forearm?

4. A soccer player extends her lower leg in a kicking motion by exerting a force with the muscle above the knee in the front of her leg. She produces an angular acceleration of 30.00 rad/s2 and her lower leg has a moment of inertia of [latex]\text{0.750 kg}\cdot {\text{m}}^{2}[/latex]  What is the force exerted by the muscle if its effective perpendicular lever arm is 1.90 cm?

6. Consider the 12.0 kg motorcycle wheel shown in Figure 6. Assume it to be approximately an annular ring with an inner radius of 0.280 m and an outer radius of 0.330 m. The motorcycle is on its center stand, so that the wheel can spin freely. (a) If the drive chain exerts a force of 2200 N at a radius of 5.00 cm, what is the angular acceleration of the wheel? (b) What is the tangential acceleration of a point on the outer edge of the tire? (c) How long, starting from rest, does it take to reach an angular velocity of 80.0 rad/s? 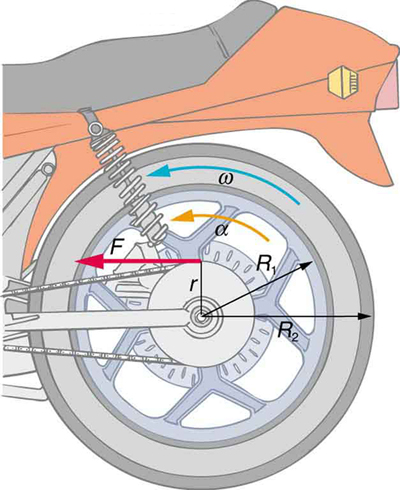 Figure 6. A motorcycle wheel has a moment of inertia approximately that of an annular ring.

7. Zorch, an archenemy of Superman, decides to slow Earth’s rotation to once per 28.0 h by exerting an opposing force at and parallel to the equator. Superman is not immediately concerned, because he knows Zorch can only exert a force of 4.00 × 107 N (a little greater than a Saturn V rocket’s thrust). How long must Zorch push with this force to accomplish his goal? (This period gives Superman time to devote to other villains.) Explicitly show how you follow the steps found in the Problem-Solving Strategy for Rotational Dynamics section (above).

10. Unreasonable Results A gymnast doing a forward flip lands on the mat and exerts a 500-N ∙ m torque to slow and then reverse her angular velocity. Her initial angular velocity is 10.0 rad/s, and her moment of inertia is [latex]0.050\text{kg}\cdot {\text{m}}^{2}[/latex]. (a) What time is required for her to exactly reverse her spin? (b) What is unreasonable about the result? (c) Which premises are unreasonable or inconsistent?

11. Unreasonable Results An advertisement claims that an 800-kg car is aided by its 20.0-kg flywheel, which can accelerate the car from rest to a speed of 30.0 m/s. The flywheel is a disk with a 0.150-m radius. (a) Calculate the angular velocity the flywheel must have if 95.0% of its rotational energy is used to get the car up to speed. (b) What is unreasonable about the result? (c) Which premise is unreasonable or which premises are inconsistent?

torque:
the turning effectiveness of a force

moment of inertia:
mass times the square of perpendicular distance from the rotation axis; for a point mass, it is I = mr2 and, because any object can be built up from a collection of point masses, this relationship is the basis for all other moments of inertia

11. (a) 17,500 rpm (b) This angular velocity is very high for a disk of this size and mass. The radial acceleration at the edge of the disk is > 50,000 gs. (c) Flywheel mass and radius should both be much greater, allowing for a lower spin rate (angular velocity).