Work, Energy, and Power in Humans 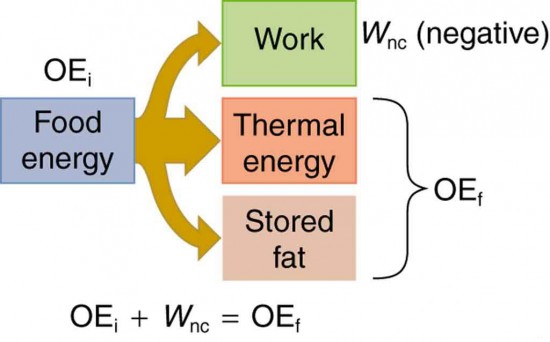 Figure 1. Energy consumed by humans is converted to work, thermal energy, and stored fat. By far the largest fraction goes to thermal energy, although the fraction varies depending on the type of physical activity.

Our own bodies, like all living organisms, are energy conversion machines. Conservation of energy implies that the chemical energy stored in food is converted into work, thermal energy, and/or stored as chemical energy in fatty tissue. (See Figure 1.) The fraction going into each form depends both on how much we eat and on our level of physical activity. If we eat more than is needed to do work and stay warm, the remainder goes into body fat.

The rate at which the body uses food energy to sustain life and to do different activities is called the metabolic rate. The total energy conversion rate of a person at rest is called the basal metabolic rate (BMR) and is divided among various systems in the body, as shown in Table 1. The largest fraction goes to the liver and spleen, with the brain coming next. Of course, during vigorous exercise, the energy consumption of the skeletal muscles and heart increase markedly. About 75% of the calories burned in a day go into these basic functions. The BMR is a function of age, gender, total body weight, and amount of muscle mass (which burns more calories than body fat). Athletes have a greater BMR due to this last factor.

Energy consumption is directly proportional to oxygen consumption because the digestive process is basically one of oxidizing food. We can measure the energy people use during various activities by measuring their oxygen use. (See Figure 2.) Approximately 20 kJ of energy are produced for each liter of oxygen consumed, independent of the type of food. Table 2 shows energy and oxygen consumption rates (power expended) for a variety of activities.

Work done by a person is sometimes called useful work, which is work done on the outside world, such as lifting weights. Useful work requires a force exerted through a distance on the outside world, and so it excludes internal work, such as that done by the heart when pumping blood. Useful work does include that done in climbing stairs or accelerating to a full run, because these are accomplished by exerting forces on the outside world. Forces exerted by the body are nonconservative, so that they can change the mechanical energy (KE + PE) of the system worked upon, and this is often the goal. A baseball player throwing a ball, for example, increases both the ball’s kinetic and potential energy.

If a person needs more energy than they consume, such as when doing vigorous work, the body must draw upon the chemical energy stored in fat. So exercise can be helpful in losing fat. However, the amount of exercise needed to produce a loss in fat, or to burn off extra calories consumed that day, can be large, as Example 1 illustrates.

If a person who normally requires an average of 12,000 kJ (3000 kcal) of food energy per day consumes 13,000 kJ per day, he will steadily gain weight. How much bicycling per day is required to work off this extra 1000 kJ?

Table 2 states that 400 W are used when cycling at a moderate speed. The time required to work off 1000 kJ at this rate is then

If this person uses more energy than he or she consumes, the person’s body will obtain the needed energy by metabolizing body fat. If the person uses 13,000 kJ but consumes only 12,000 kJ, then the amount of fat loss will be

assuming the energy content of fat to be 39 kJ/g. 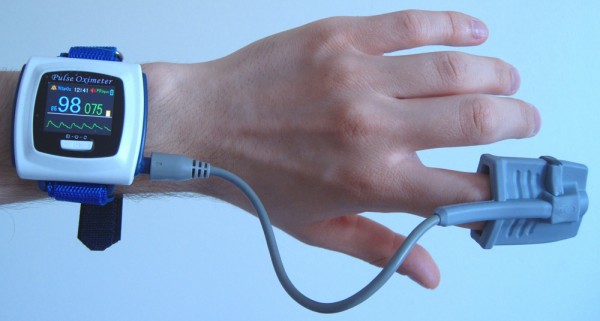 Figure 2. A pulse oxymeter is an apparatus that measures the amount of oxygen in blood. Oxymeters can be used to determine a person’s metabolic rate, which is the rate at which food energy is converted to another form. Such measurements can indicate the level of athletic conditioning as well as certain medical problems. (credit: UusiAjaja, Wikimedia Commons) 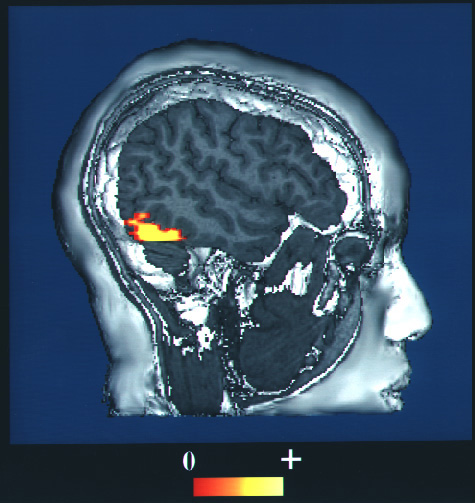 Figure 3. This fMRI scan shows an increased level of energy consumption in the vision center of the brain. Here, the patient was being asked to recognize faces. (credit: NIH via Wikimedia Commons)

All bodily functions, from thinking to lifting weights, require energy. (See Figure 3.) The many small muscle actions accompanying all quiet activity, from sleeping to head scratching, ultimately become thermal energy, as do less visible muscle actions by the heart, lungs, and digestive tract.

Shivering, in fact, is an involuntary response to low body temperature that pits muscles against one another to produce thermal energy in the body (and do no work). The kidneys and liver consume a surprising amount of energy, but the biggest surprise of all it that a full 25% of all energy consumed by the body is used to maintain electrical potentials in all living cells. (Nerve cells use this electrical potential in nerve impulses.) This bioelectrical energy ultimately becomes mostly thermal energy, but some is utilized to power chemical processes such as in the kidneys and liver, and in fat production.

metabolic rate: the rate at which the body uses food energy to sustain life and to do different activities

basal metabolic rate: the total energy conversion rate of a person at rest