U S Courts: Due Process and Equality Under the Law

Courts interpret contractual agreements between parties.  Sometimes the parties dispute over the meaning of the contract, and sometimes the dispute concerns an infraction against the rules that hold people accountable to the contract.  No matter whether the dispute is about a criminal activity or a civil action, each individual party to the process, litigant, is guaranteed a protected right to due process. The Constitution, the people’s contract with the government, enumerates this protection no matter the race, gender, age, socioeconomic status, or personal ability of any individual involved in a legal dispute. Not only is each individual to receive due process (equity and standardization of procedure), they are also to be treated equally by the judicial system in spite of any factor of birth, situation, or circumstance.

Courts hear two different types of disputes: criminal and civil. Under criminal procedure, governments establish rules and punishments; laws define conduct that is prohibited because it can harm others and impose punishment. Crimes are usually labeled based on their nature and seriousness; felonies are the more serious crimes. When someone commits a criminal act, the government (state or national, depending on which law has been broken) charges that person with a crime, and the case brought to court contains the name of the charging government, as in Miranda v. Arizona discussed below.[2]

Criminal procedure involves processing (prosecuting/prosecution) cases against individuals (defendant) accused of harming others including the decision about punishment for criminal actions. A verdict (opinion or judgement) of guilt or innocence is sought in criminal cases.

Civil procedure involves two or more private (non-government) parties, at least one of whom (plaintiff) alleges harm or civil injury (tort) committed by the other (defendant/respondent). A decision in favor of one of the parties is sought in civil cases based upon preponderance of evidence or which side has the best argument and evidence. The plaintiff makes a choice of basic trial procedure.  The choice is between a bench trial (judge presides as both judge and jury) or a petit jury trial (random citizens called to serve). The basic steps in both civil and criminial procedure vary according to individual cases and case complexities. The chart below is a basic selection of procedural steps generally associated with the constitutional protection of due process. 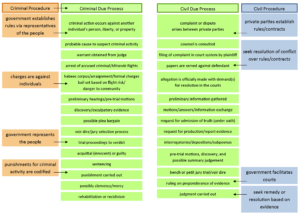 In both criminal and civil matters, the courts decide the remedy and resolution of the case, and in all cases, the U.S. Supreme Court is the final court of appeal.

Although the Supreme Court tends to draw the most public attention, it typically hears fewer than one hundred cases every year. About 90 percent of all cases in the U.S. court system are heard at the state level.[3] The federal/national courts handle approximately 2-3 thousand cases a year while state courts adjudicate several million. State courts handle criminal and civil matters (personal injury, malpractice, divorce, family, juvenile, probate, contract disputes, and real estate cases).

The federal courts hear cases involving foreign governments, patents, copyright infringement, Native American rights, maritime law, bankruptcy, or controversies between two or more states. Cases arising from activities across state lines (interstate commerce) are also subject to federal court jurisdiction, as are cases in which the United States is a party. A dispute between two parties not from the same state or nation and in which damages of at least $75,000 are claimed is handled at the federal level. Such a case is known as a diversity of citizenship case.[4]

It is possible that issues of federal law may start in the state courts before making their way to the federal side. Any case starting at the state and/or local level may make it into the federal system on appeal—but only on points that involve a federal law or question, and usually after all avenues of appeal in the state courts have been exhausted. Consider the case Miranda v. Arizona.[5]

Ernesto Miranda, arrested for kidnapping and rape (violations of state law), was convicted and sentenced to prison after a key piece of evidence—his own signed confession—was presented at trial in the Arizona court. On appeal to the Arizona Supreme Court and then the U.S. Supreme Court, the case requested to exclude Miranda’s confession on the grounds that its admission was a violation of his constitutional rights. By a slim 5–4 margin, the justices ruled that the confession should be excluded from evidence.  In obtaining it, the police had violated Miranda’s Fifth Amendment right against self-incrimination and his Sixth Amendment right to an attorney. Miranda’s original conviction was overturned.

The Supreme Court considered only the violation of Miranda’s constitutional rights, not whether he was guilty of the crimes with which he was charged. He was retried in state court in 1967, the second time without the confession as evidence, found guilty again based on witness testimony and other evidence, and sent to prison.

Have you ever served on a jury?

Since judges and justices are not elected, we sometimes consider the courts removed from the public; however, this is not always the case.  Average citizens may get involved with the courts firsthand as part of their decision-making process. If you have not already been called, you may receive a summons for jury duty from your local court system. You may also be asked to serve federal jury duty, such as U.S. district court duty or federal grand jury duty.  Local or state jury service is more common.

While your first reaction may be to start planning a way to get out of it, participating in jury service is vital to the operation of the judicial system.  It provides individuals in court the chance to be heard and to be tried fairly by a group of their peers. Jury duty has benefits for those who serve as well. You will no doubt come away better informed about how the judicial system works. Who knows? You might even get an unexpected surprise, as some citizens in Dallas, Texas did recently when former President George W. Bush showed up to serve jury duty with them. Prospective jurors participate in the jury selection process called voir dire.

Marijuana Laws and the Courts

There are so many differences in marijuana laws between states, and between the states and the national government, that uniform application of treatment in courts across the nation is nearly impossible. What is legal in one state may be illegal in another, and state laws do not cross state geographic boundary lines—but people do. A person residing in any of the fifty states is still subject to federal law. 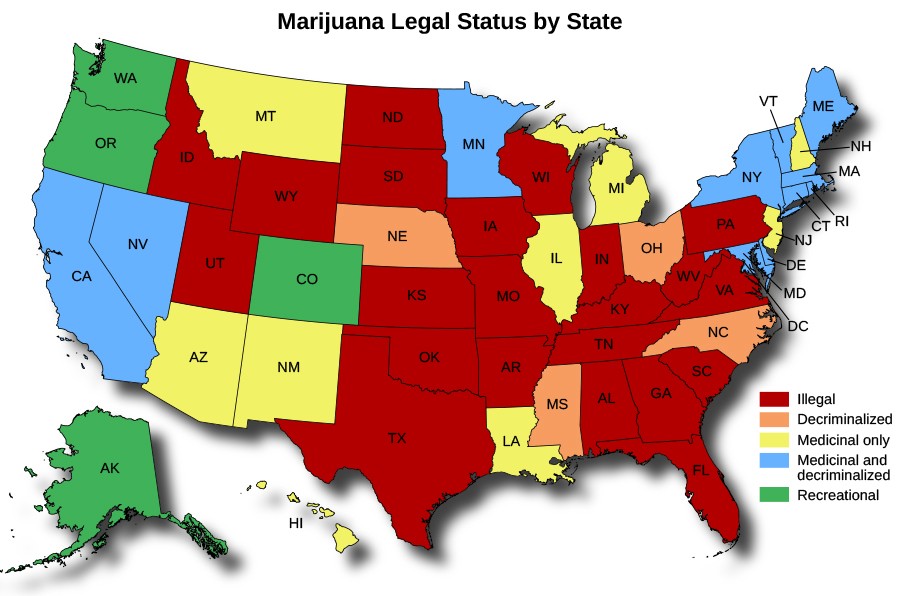 Marijuana laws vary remarkably across the fifty states. In most states, marijuana use is illegal, as it is under federal law, but some states have decriminalized it, some allow it for medicinal use, and some have done both. Marijuana is currently legal for recreational use in four states, per state law.

Differences can lead, somewhat ironically, to arrests and federal criminal charges for people who have marijuana in states where it is legal, or to federal raids on growers and dispensaries that would otherwise be operating legally under their state’s law.

Differences among the states have also prompted a number of lawsuits against states with legalized marijuana.  People opposed to state laws seek relief from the courts. They want courts to resolve the contradictions and conflicts between states as well as between states and the national government. Citing concerns over cross-border trafficking, difficulties with law enforcement, and violations of the Constitution’s supremacy clause, Nebraska and Oklahoma have petitioned the U.S. Supreme Court to intervene and rule on the legality of Colorado’s marijuana law, hoping to get it overturned.[6]

Where you are physically located can affect not only what is allowable and what is not, but also how cases are judged. For decades, political scientists have confirmed that political culture affects the operation of government institutions, and when we add to that the differing political interests and cultures at work within each state, we end up with court systems that vary greatly in their judicial and decision-making processes.[7]

Each state court system operates with its own individual set of biases. People with varying interests, ideologies, behaviors, and attitudes run the disparate legal systems, so the results they produce are not always the same. Moreover, the selection method for judges at the state and local level varies–elected or appointed.

Just as the laws vary across the states, so do judicial rulings and interpretations, and the judges who make them. That means there may not be uniform application of the law—even of the same law—nationwide. We are somewhat bound by geography and do not always have the luxury of picking and choosing the venue for our particular case. So, while having such a decentralized and varied set of judicial operations affects the kinds of cases that make it to the courts and gives citizens alternate locations to get their case heard, it may also lead to disparities in the way they are treated once they get there.