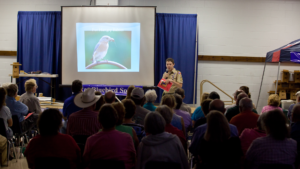 William T. Hornaday Conservation Award winner and Eagle Scout delivers informative speech about the importance of nestboxes and promoting the interests of the Texas Bluebird Society at their 10th Annual Meeting and Convention in Glen Rose, Texas on August 20, 2011. TBS is an active interest group advocating on behalf of the protection of Eastern Bluebirds and their habitat.

People with a common interest often work together advocating on behalf of this shared interest. This is an interest group. Interest groups abound in the United States. Recently, many groups spoke out on behalf of both sides of the argument over government heealthcare. The 2010 Patient Protection and Affordable Care Act (PPACA), also known as Obamacare, represented a substantial overhaul of the U.S. healthcare system.[1] Given its potential impact, interest group representatives (lobbyists) from the insurance industry, hospitals, medical device manufacturers, and organizations representing doctors, patients, and employers all tried to influence what the law would look like and the way it would operate. Ordinary people took to the streets to voice their opinion. Some state governors sued to prevent a requirement in the law that their states expand Medicaid coverage. A number of interest groups challenged the law in court.

Interest groups like those for and against the PPACA play a fundamental role in representing individuals, corporate interests, and the public before the government. They help inform the public and lawmakers about issues, monitor government actions, and promote policies that benefit their interests, using all three branches of government at the federal, state, and local levels. The multi-layered federal structure in the US allows for more points of access or linkages to the government.