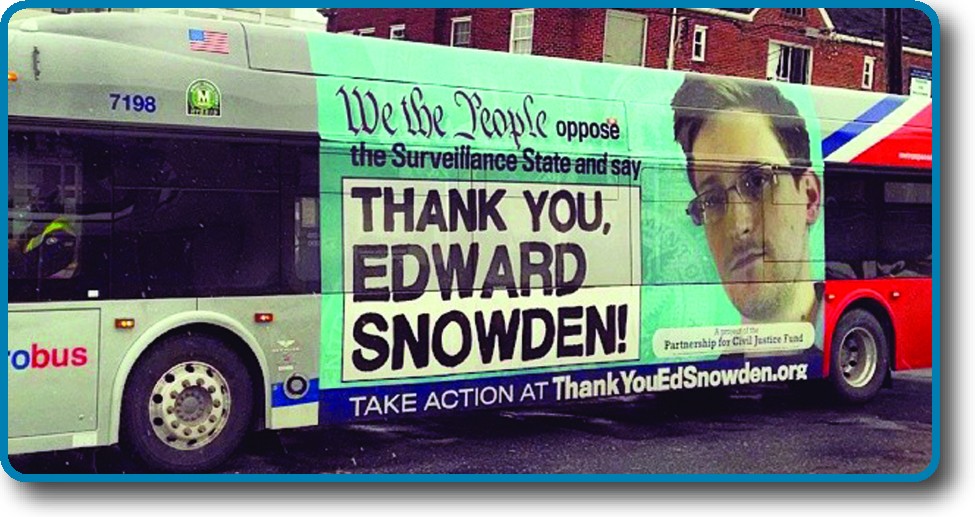 Edward Snowden, a former contractor for the U.S. government, leaked thousands of classified documents to journalists in June 2013. These documents revealed the existence of multiple global surveillance programs run by the National Security Agency. (credit: modification of work by Bruno Sanchez-Andrade Nuño)

Edward Snowden revealed that U.S. government agencies are conducting widespread surveillance, capturing not only the conversations of foreign leaders and suspected terrorists but also the private communications of U.S. citizens, even those not suspected of criminal activity (without probable cause or a specific warrant targeting an individual action).

The framers of the Constitution wanted a government that would not repeat the very abuses of individual liberties (basic freedoms possessed by all human beings) and rights (how much freedom ruling authority protects or denies individuals and whether that authority is exercised equitably) that caused them to declare independence from Britain. However, laws and other “parchment barriers” (or written documents) alone have not protected freedoms over the years; instead, citizens have learned the truth of the old saying “Eternal vigilance is the price of liberty”(often attributed to Thomas Jefferson but actually said by Irish politician John Philpot Curran).  Ordinary citizens’ actions are at the core of a vigilant effort to protect constitutional liberties.

If citizens of the United States acknowledge only the laws of the state, people in power can easily curtail civil rights and individual freedoms/civil liberties. Laws of the state, those formed through legislative action or agreement between parties, are positive laws.[1] Generally the term “positive law” connotes statutes, i.e., law enacted by a duly authorized legislature. [2] As used in this sense, positive law is distinguishable from natural law. The term “natural law”, especially as used in legal philosophy, refers to a set of universal principles and rules properly governing moral human conduct. Unlike a statute, natural law is not created by human beings. Rather, natural law is thought to be the preexisting law of nature, which human beings can discover through their capacity for rational analysis.[2]

Natural law or unalienable rights are acknowledged to exist outside the laws of the state. If an individual retains rights to maintain their own life and obtain property by attaching their labor to the acquisition, do individuals receive or obtain such rights from the state? If individuals recognize the state as the grantor of rights, may the state not remove rights at the will of those in power?

If citizens acknowlege the government gives them rights, they must also acknowlege the government has the power to remove these rights. If citizens believe they consent to some restrictions on their unalienable/inseparable rights (possessed by them because they are human beings), they consent only to government restrictions on their rights in order to obtain a benefit. Usually a portion of these rights are surrendered to the positive laws enforced by government toward safety and security for the remaining rights. Rights to self-determine driving destinations, times, speeds and methods are surrendered to positive laws established to protect the health and safety of all drivers and pedestrians. 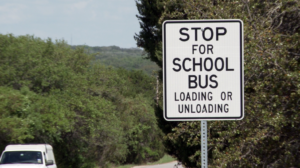 Stop for School Bus Loading or Unloading at http://www.txdot.gov/driver/kids-teens/school.html.

AUSTIN – In conjunction with National School Bus Safety Week (Oct. 20-24), the Texas Department of Public Safety (DPS) is reminding drivers that it is illegal to pass any school bus that is stopped and operating a visual signal – either flashing red lights or a stop sign. During this time, DPS Highway Patrol troopers will be on the lookout for drivers who disregard the law.

“Children are particularly vulnerable when entering or exiting a school bus, and drivers who refuse to yield to a stopped school bus put our children in harm’s way,” said DPS Director Steven McCraw. “DPS will not tolerate those who ignore the law, and we urge drivers to make safety a priority when they encounter school buses.”

During National School Bus Safety Week, troopers in many areas will be riding on or following school buses to catch motorists who disregard the law. Troopers will also be patrolling areas where school buses pick up and drop off students, watching for motorists violating the school bus law. Drivers who violate the law could face fines as much as $1,250.

According to Texas statute, a driver – traveling in either direction – must stop when approaching a school bus that is stopped and operating a visual signal. The driver may not proceed until one of the following occurs: the school bus resumes motion; the operator is signaled by the bus driver to proceed; or the visual signal is no longer activated.

If a road is divided only by a left-turning lane, drivers on both sides of the roadway must stop for school buses with alternating red flashing lights activated. However, if the lanes are separated by an intervening space or physical barrier, only motorists going in the same direction as the bus are required to stop.

(As a reminder, school buses, by law, must stop at all railroad crossings.)

natural law–a set of universal principles and rules that properly govern moral human conduct; the preexisting law of nature, which human beings can discover through their capacity for rational analysis

positive law–human made rules and regulations; human agreed upon contracts and constitutions