Constitutions and Contracts: Articles of Confederation

Successful revolt depended on the ability to borrow money, negotiate treaties, and defend the borders.  Delegates of the confederation government sought recognition as an independent nation by other countries. The Second Continental Congress needed a government strong enough to win independence and recognition without depriving people of the very liberties for which they were fighting.

Establishing a New Framework for Governing

The final draft of the Articles of Confederation, which formed the basis of the new nation’s government, was accepted by Congress in 1777 and submitted for ratification by all thirteen states. Maryland argued that territory west of the Appalachian mountains, to which some states had laid claim, should instead be held by the national government as public land for the benefit of all. The last of these states, Virginia, relinquished its land claims in 1781, clearing the way for Maryland’s approval and ratification of the Articles.[1]

The Articles defined a governmental structure (confederacy) based upon a confederation of states, which would be independent, self-governing entities unifying for the purpose of common defense and commerce.  Newly separated from a monarchy with a unitary or highly centralized power structure, the representatives sought an emphasis on local government within the states, which they believed were best suited to manage states’ separate interests.  Fearful of replacing one oppressive national government with another, the framers of this confederation created an alliance held together by a weak central government.

Following the Declaration of Independence, the central government had written authority to act for national defense. States were assumed to have a common interest in defense and a common desire to supply militias. In the careful balance between power for the national government and liberty for the states, the Articles of Confederation favored the states.

Powers given to the central government were limited. The Confederation Congress had the authority to exchange ambassadors, make treaties with foreign governments and Indian tribes, declare war, coin currency, borrow money, and settle disputes between states. Each state legislature appointed delegates to the Congress. Regardless of its size or the number of delegates it chose to send, each state had one vote. To avoid an elite professional political class, delegates served for no more than three consecutive years, . The nation had no independent chief executive or judiciary. Nine of thirteen votes were required before the central government could act, and the Articles of Confederation could be changed only by unanimous approval of all thirteen states.

Why did the Articles fail? 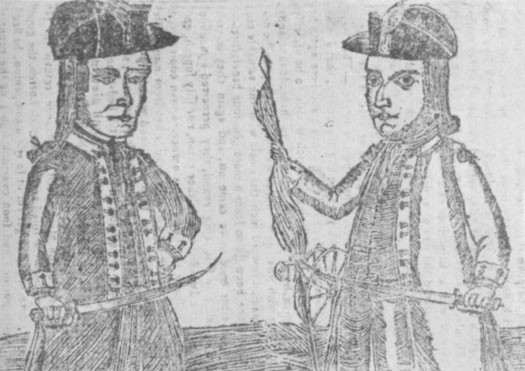 This contemporary depiction of Continental Army veteran Daniel Shays (left) and Job Shattuck (right), who led an uprising of Massachusetts farmers in 1786–1787 that prompted calls for a stronger national government, appeared on the cover of Bickerstaff’s Genuine Boston Almanack for 1787.

Fearful of creating a system no better than the oppressive monarchy they fought to escape, the men drafting the Articles of Confederation limited the powers of the central government. The states maintained the right to locally govern their residents, while the central government could declare war, coin money, and conduct foreign affairs. An inability to impose taxes, regulate commerce, or raise an army hindered the defense of the nation and payment of debts. A solution had to be found.  Miraculously, this confederation managed to win a war with the world’s leading super power of the 18th century in spite of its weaknesses.

Articles of Confederation—the first basis for the new nation’s government; adopted in 1781; created an alliance of sovereign states held together by a weak central government

unitary–a form of government in which political power is highly centralized; often despotic/authoritarian; high level of order and control