A dry description of the function of congressional leadership and the many committees and subcommittees in Congress may suggest that the drafting and amending of legislation is a finely tuned process refined over time. In reality, however, committees are more likely to kill legislation than to pass it. The last few decades have seen a dramatic transformation in the way Congress does business. Creative interpretations of rules and statues have turned small loopholes into the large gateways through which much congressional work now gets done.

The traditional process by which a bill becomes a law is called the classic legislative process. First, legislation must be drafted. Theoretically, anyone can do this. Successful legislation is often drafted by entities outside of Congress, such as think tank or advocacy groups, or the president. However, Congress is not obligated to read or introduce this legislation, and only a bill introduced or sponsored by a member of Congress can hope to become law. Even the president must rely on legislators to introduce his or her legislative agenda.

Technically, bills that raise revenue, like tax bills, must begin in the House. This exception is encoded within the Constitution in Article I, Section 7, which states, “All Bills for raising Revenue shall originate in the House of Representatives; but the Senate may propose or concur with amendments as on other Bills.” Yet, despite the seemingly clear language of the Constitution, Congress has found ways to bypass this rule.

Whether at the full committee level or in one of the subcommittees, the next step is to hold a hearing on the bill. If the chair declines a hearing, this is amounts to killing the bill in committee. The hearing provides an opportunity for the committee to hear and evaluate expert opinions on the bill. Experts may include officials from the agency that would be responsible for executing the bill, the bill’s sponsors from Congress, and industry lobbyists, interest groups, and academic or business experts. Typically, the committee will also accept written statements from the public concerning the bill in question. For many bills, the hearing process can be very routine and straightforward.

Next the bill enters the markup stage. This is an amending and voting process. In the end, with or without amendments, the committee or subcommittee will vote. If the committee decides not to advance the bill at that time it is tabled. Tabling a bill typically means the bill is dead, but with an option to bring it back up for a vote again. If the committee decides to advance the bill it is printed and goes to the chamber, either the House or the Senate. For example, assume that a bill goes first to the House (although the reverse could be true, and, in fact, bills can move simultaneously through both chambers). Before it reaches the House floor, it must first go through the House Committee on Rules. This committee establishes the rules of debate, such as time limits and limits on the number and type of amendments. After these rules have been established, the bill moves through the floor, where it is debated and amendments can be added. Once the limits of debate and amendments have been reached, the House holds a vote. If a simple majority, 50 percent plus 1, votes to advance the bill, it moves out of the House and into the Senate.

Once in the Senate, the bill is placed on the calendar so it can be debated. More often the Senate will also consider the bill (or a companion version) in its own committees. Since the Senate is much smaller than the House, it can afford to be more flexible in its debate rules. Senators usually allow each other to talk and debate as long as the speaker allows, though they can agree as a body to create time limits. Without limits, debate continues until a motion to table has been offered and voted on.

This flexibility for speaking in the Senate gave rise to a unique tactic, the filibuster. The word “filibuster” comes from the Dutch word vrijbuiter, which means pirate. The name is appropriate, since a senator who launches a filibuster virtually hijacks the floor of the chamber by speaking for long periods of time, preventing the Senate from closing debate and acting on a bill. The tactic was perfected in the 1850s as Congress wrestled with the complicated issue of slavery. After the Civil War, the use of the filibuster became even more common. Eventually, in 1917, the Senate passed Rule 22, which allowed the chamber to hold a cloture vote to end debate. To invoke cloture, the Senate required a two-thirds majority.

The Senate further weakened the filibuster by reducing the number needed for cloture from two-thirds to three-fifths, or sixty votes, where it remains today (except for judicial nominations for which only fifty-five votes are needed to invoke cloture). Moreover, filibusters are not permitted on the annual budget reconciliation act (the Reconciliation Act of 2010 was a change to ensure passage of healthcare legislation).

Because both the House and the Senate can and often do amend bills, the bills that pass out of each chamber frequently differ. This presents a problem since the Constitution requires that both chambers pass identical bills. One simple solution is for the first chamber to simply accept the bill that ultimately makes it out of the second chamber. Another solution is for the first chamber to further amend the second chamber’s bill and send it back to the second chamber. Congress typically takes one of these two options, but about one in every eight bills cannot be reconciled. These bills must be sent to a conference committee that negotiates a reconciliation both chambers can accept without amendment. Only then can the bill progress to the president’s desk for signature or veto. If the president does veto the bill, both chambers must gather a two-thirds vote to override the veto and force the president to sign it. If the two-thirds threshold in each chamber cannot be reached, the bill dies. 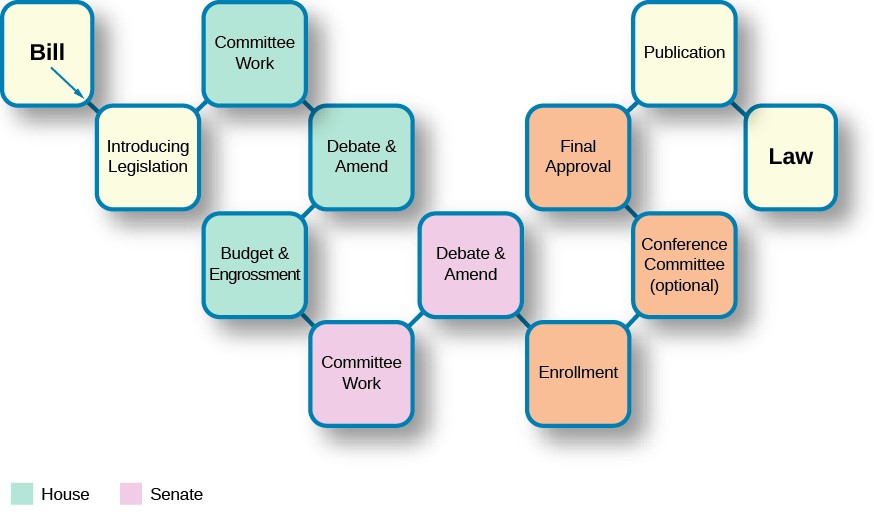 The process by which a bill becomes law is long and complicated, but it is designed to ensure that in the end all parties are satisfied with the bill’s provisions.

For one look at the classic legislative process, visit YouTube to view “I’m Just a Bill” from the ABC Schoolhouse Rock! series.

For much of the nation’s history, the process described above was the standard method by which a bill became a law. Over the course of the last three and a half decades, however, changes in rules and procedure have enabled alternate routes. Collectively, these different routes constitute what some political scientists have described as a new but unorthodox legislative process. According to political scientist Barbara Sinclair, the primary trigger for the shift away from the classic legislative route was the budget reforms of the 1970s. The 1974 Budget and Impoundment Control Act gave Congress a mechanism for making large and all-encompassing budget decisions. In the years that followed, the budget process gradually became the vehicle for creating comprehensive policy changes. One large step in this transformation occurred in 1981 when President Ronald Reagan’s administration suggested using the budget to push through his economic reforms.

By attaching the reforms to the budget resolution Congress could force an up or down (yea or nay) vote on the whole package. Such a packaged bill is called an omnibus bill.[1] Creating and voting for an omnibus bill allows Congress to quickly accomplish policy changes that would have required many votes and political capital over much time. This and successive similar uses of the budget process appealed to many in Congress. During the contentious and ideologically divided 1990s, the budget process became the common problem-solving mechanism in the legislature, thus laying the groundwork for the way legislation works today.

An important characteristic feature of modern legislating is the greatly expanded power and influence of the party leadership over the control of bills. One reason for this change was the heightened partisanship that stretches back to the 1980s and is still with us today. With such high political stakes, the party leadership is reluctant to simply allow the committees to work things out on their own. In the House, the leadership uses special rules to guide bills through the legislative process and toward a particular outcome. Uncommon just a few decades ago, these now widely used rules restrict debate and options, and are designed to focus the attention of members to party priorities and agendas.

The practice of multiple referrals, with which entire bills or portions of those bills are referred to more than one committee, greatly weakened the different specialization monopolies committees held primarily in the House but also to an extent in the Senate. With less control over the bills, committees naturally reached out to the leadership for assistance. As a testament to its increasing control, the leadership may sometimes avoid committees altogether, preferring to work things out on the floor. And even when bills move through the committees, the leadership often seeks to adjust the legislation before it reaches the floor.

Another feature of the modern legislative process, exclusively in the Senate, is the application of the modern filibuster. Unlike the traditional filibuster, in which a senator took the floor and held it for as long as possible, the modern filibuster is actually a perversion of the cloture rules adopted to control the filibuster. When partisanship is high, as it has been frequently, the senators can request cloture before any bill can get a vote. This has the effect of increasing the number of votes needed for a bill to advance from a simple majority of fifty-one to a super majority of sixty. The effect is to give the Senate minority great power to obstruct if it is inclined to do so.

cloture–a parliamentary process to end a debate in the Senate, as a measure against the filibuster; invoked when three-fifths of senators vote for the motion

filibuster–a parliamentary maneuver used in the Senate to extend debate on a piece of legislation as long as possible, typically with the intended purpose of obstructing or killing it

mark–the amending and voting process in a congressional committee