Constitutions and Contracts: Where did the ideas for the US Constitution originate?

Revolution and nation building in America emerged from historical European roots–not new ideas but old ones led the colonists to revolt and form a new nation.

Where did ideas for revolution arise? 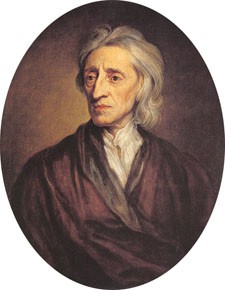 John Locke was one of the most influential thinkers of the Enlightenment. His writings form the basis for many modern political ideas.

Most people understand the idea of natural or unalienable rights, believing no other individual or government has the right to take away their life, restrict their liberty, or take their property–without a very good reason.

People often band together to protect life, liberty and property.  These bands may have a contractual agreements because individuals and governments do not always respect the life, liberty, and property of others. Throughout history few governments have recognized individual rights.  John Locke, a seventeenth-century English philosopher, wrote about the relationship between government and unalienable or natural rights (whether arising from a belief in a higher power bestowing these rights or from a human ability to reason that such rights exist).

Locke was not the first to suggest such rights.  The English elites sought to protect lives, liberties, and property of English freemen long before the settling of North American colonies. In 1215, King John signed Magna Carta—a contract protecting life, liberty, and property–“No freemen shall be taken, imprisoned . . . or in any way destroyed . . . except by the lawful judgment of his peers or by the law of the land.” While Magna Carta afforded protections only to the English barons who were in revolt against King John in 1215, these protections were considered a cornerstone of liberty for freemen of all socio-economic conditions by the time of the American Revolution—rights always possessed by the people but begrudgingly acknowledged by King John. A belief in unalienable or natural rights of all human beings precludes a belief that rights are only protected by government and not granted or conveyed by government.

The problem with Magna Carta is significant.  If a king may grant rights, a king may remove rights.  If rights are unalienable (not granted by any individual or government), people may never be separated from these rights to life, liberty and property.  Governments may protect the rights or infringe/restrict them, but they do not bestow or grant them.

Locke also addressed the purpose of government. For centuries monarchies claimed their authority originated from God.  Locke, however, asserted that human beings created government. People sacrifice some freedom in exchange for government protection of their lives, liberty, and property. Locke called this implicit agreement between a people and their government the social contract. Should government deprive people of their rights by abusing its authority, the contract was broken and the people were no longer bound by its terms. 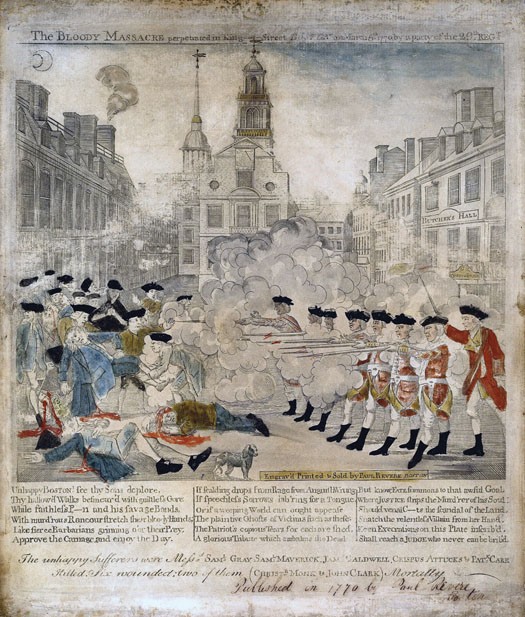 The Sons of Liberty circulated this sensationalized version of the events of March 5, 1770, in order to promote the rightness of their cause; it depicts British soldiers firing on unarmed civilians in the event that became known as the Boston Massacre. Later portrayals would more prominently feature Crispus Attucks, an African American who was one of the first to die. Eight British soldiers were tried for murder as a result of the confrontation.

The people could thus withdraw their consent to obey and form another government for their protection–popular sovereignty. For Locke, withdrawing consent meant replacing one monarch with another.

How did disagreement move from thought to war?  Over time the British monarchy came to treat colonists differently from other freemen living in Britain.  Learned men among the colonies’ elites, familiar with the works of Locke and other political philosophers boldly sought a solution.  Appeals to the monarchy failed.  Parliament and King George III made decisions for colonists without their input/consent. Colonists’ rights to property (taxes and quartering of soldiers without consent) were taken from them.  Ultimately, these colonial elites determined the social contract was broken, and they sought a means of self-government.  Separation was the solution.

Following the Boston Massacre, resistance to British rule grew. In December 1773, a group of Boston men boarded a ship in Boston harbor and threw a cargo of tea into the water.  The protest concerned granting of a monopoly on tea to the British East India Company, which many colonial merchants resented.[1]

This act of defiance became known as the Boston Tea Party. Today, many who do not agree with the positions of the Democratic or Republican parties have organized themselves into an oppositional group called the Tea Party.

Members of the modern Tea Party movement claim to represent the same spirit as their colonial forebears in the iconic lithograph The Destruction of Tea at Boston Harbor (a) and protest against what they perceive as government’s interference with people’s rights. In April 2010, members of a Tea Party Express rally on the Boston Common signed a signature wall to record their protest (b). (credit b: modification of work by Tim Pierce)

In 1774, Parliament responded to colonial defiance with laws called the Coercive Acts, punishing Boston for leading resistance to British rule. These acts interfered with the colony’s ability to govern itself. This assault on Massachusetts and its economy enraged people throughout the colonies, and delegates from all the colonies except Georgia formed the First Continental Congress to create a unified opposition to Great Britain and to develop a declaration of rights and grievances.  King George III continued to ignore the reasoned appeals of colonial leaders for equal treatment.

In 1775, delegates met again as the Second Continental Congress. Armed conflict had begun with skirmishes between colonial militiamen and British troops at Lexington and Concord, Massachusetts. Congress drafted a Declaration of Causes explaining the colonies’ reasons for rebellion. On July 2, 1776, Congress declared American independence from Britain and two days later signed the Declaration of Independence.

We hold these truths to be self-evident, that all men are created equal, that they are endowed by their Creator with certain unalienable Rights, that among these are Life, Liberty and the pursuit of Happiness.–That to secure these rights, Governments are instituted among Men, deriving their just powers from the consent of the governed, –That whenever any Form of Government becomes destructive of these ends, it is the Right of the People to alter or to abolish it, and to institute new Government, laying its foundation on such principles and organizing its powers in such form, as to them shall seem most likely to effect their Safety and Happiness.[2]

Britain had deprived the colonists of their rights. The King had “establish[ed] . . . an absolute Tyranny over these States.” Just as their English forebears had removed King James II from the throne in 1689, the colonists now wished to establish a new rule.  There was a crucial difference this time.  The colonists did not want a new king.  They wanted self-government.[3]

With their signing of the Declaration of Independence, the founders of the United States committed themselves to the creation of a new government. 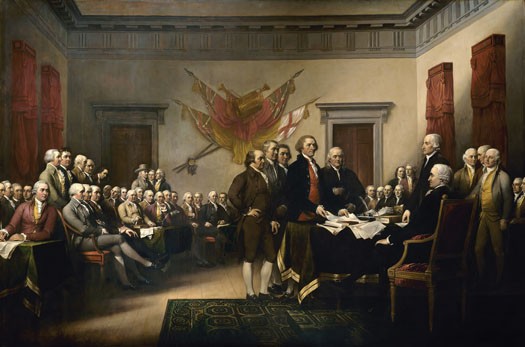 The presentation of the Declaration of Independence is commemorated in a painting by John Trumbull in 1817. It was commissioned to hang in the Capitol in Washington, DC.

Thomas Jefferson explains in the Declaration of Independence why many colonists felt the need to form a new nation. His evocation of the natural rights of man and his list of grievances against the king also served as the model for the Declaration of Sentiments that was written in 1848 in favor of giving women in the United States rights equal to those of men. View both documents and compare.

natural rights–the right to life, liberty, and property; believed to be given by a Higher Power or understood by human reasoning ability; no government may give/convey these liberties; government may only protect or infringe on these rights

popular sovereignty–the people are sovereign rather than a monarch or oligarchy; the rule of law places people above politics