The Bureaucracy: Structure and Function

Turning a spoils system bureaucracy into a merit-based civil service, while desirable, comes with a number of different consequences. The patronage system tied the livelihoods of civil service workers to their party loyalty and discipline. Severing these ties, as has occurred in the United States over the last century and a half, has transformed the way bureaucracies operate. Without the patronage network, bureaucracies form their own motivations. These motivations, sociologists have discovered, are designed to benefit and perpetuate the bureaucracies themselves.

Bureaucracies are complex institutions designed to accomplish specific tasks. This complexity, and the fact that they are organizations composed of human beings, can make it challenging for us to understand how bureaucracies work.

Bureaucracies are naturally competitive and power-hungry. This means bureaucrats, especially at the highest levels, recognize that limited resources are available to feed bureaucracies, so they will work to enhance the status of their own bureaucracy to the detriment of others.

This effort can sometimes take the form of merely emphasizing to Congress the value of their bureaucratic task, but it also means the bureaucracy will attempt to maximize its budget by depleting all its allotted resources each year. This ploy makes it more difficult for legislators to cut the bureaucracy’s future budget, a strategy that succeeds at the expense of thrift. In this way, the bureaucracy will eventually grow far beyond what is necessary and create bureaucratic waste that would otherwise be spent more efficiently among the other bureaucracies.

Other theorists have come to the conclusion that the extent to which bureaucracies compete for scarce resources is not what provides the greatest insight into how a bureaucracy functions. Rather, it is the absence of competition.

Similarities exist between a bureaucracy like the Internal Revenue Service (IRS) and a private monopoly like a regional power company or internet service provider that has no competitors. Such organizations are frequently criticized for waste, poor service, and a low level of client responsiveness. Consider, for example, the Bureau of Consular Affairs (BCA), the federal bureaucracy charged with issuing passports to citizens. There is no other organization from which a U.S. citizen can legitimately request and receive a passport, a process that normally takes several weeks. Thus there is no reason for the BCA to become more efficient or more responsive or to issue passports any faster.

A bureaucracy is a particular government unit established to accomplish a specific set of goals and objectives as authorized by a legislative body. In the United States, the federal bureaucracy enjoys a great degree of autonomy compared to those of other countries. This is in part due to the sheer size of the federal budget, approximately $3.5 trillion as of 2015.[1] And because many of its agencies do not have clearly defined lines of authority—roles and responsibilities established by means of a chain of command—they also are able to operate with a high degree of autonomy. However, many agency actions are subject to judicial review. In Schechter Poultry Corp. v. United States (1935), the Supreme Court found that agency authority seemed limitless.[2] Yet, not all bureaucracies are alike. In the U.S. government, there are four general types: cabinet departments, independent executive agencies, regulatory agencies, and government corporations.

There are currently fifteen cabinet departments in the federal government. Cabinet departments are major executive offices that are directly accountable to the president. They include the Departments of State, Defense, Education, Treasury, and several others. Occasionally, a department will be eliminated when government officials decide its tasks no longer need direct presidential and congressional oversight, such as happened to the Post Office Department in 1970.

Each cabinet department has a head called a secretary, appointed by the president and confirmed by the Senate. These secretaries report directly to the president, and they oversee a huge network of offices and agencies that make up the department. They also work in different capacities to achieve each department’s mission-oriented functions. Within these large bureaucratic networks are a number of undersecretaries, assistant secretaries, deputy secretaries, and many others. The Department of Justice is the one department that is structured somewhat differently. Rather than a secretary and undersecretaries, it has an attorney general, an associate attorney general, and a host of different bureau and division heads.

Individual cabinet departments are composed of numerous levels of bureaucracy. These levels descend from the department head in a mostly hierarchical pattern and consist of essential staff, smaller offices, and bureaus. Their tiered, hierarchical structure allows large bureaucracies to address many different issues by deploying dedicated and specialized officers. For example, below the secretary of state are a number of undersecretaries. These include undersecretaries for political affairs, for management, for economic growth, energy, and the environment, and many others. Each controls a number of bureaus and offices. Each bureau and office in turn oversees a more focused aspect of the undersecretary’s field of specialization. For example, below the undersecretary for public diplomacy and public affairs are three bureaus: educational and cultural affairs, public affairs, and international information programs. Frequently, these bureaus have even more specialized departments under them. Under the bureau of educational and cultural affairs are the spokesperson for the Department of State and his or her staff, the Office of the Historian, and the United States Diplomacy Center.[3] 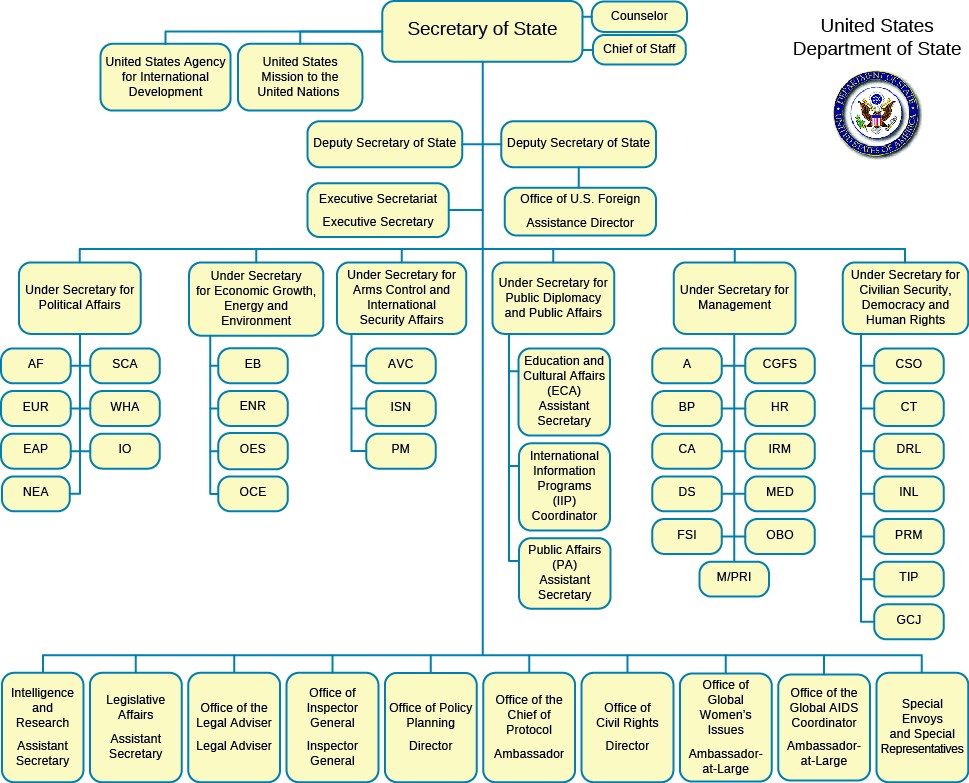 Created in 1939 by President Franklin D. Roosevelt to help manage the growing responsibilities of the White House, the Executive Office of the President still works today to “provide the President with the support that he or she needs to govern effectively.”

Like cabinet departments, independent executive agencies report directly to the president, with heads appointed by the president. Unlike the larger cabinet departments, however, independent agencies are assigned far more focused tasks. These agencies are considered independent because they are not subject to the regulatory authority of any specific department. They perform vital functions and are a major part of the bureaucratic landscape of the United States–providing information or services. Some prominent independent agencies are the Central Intelligence Agency (CIA), which collects and manages intelligence vital to national interests and the National Aeronautics and Space Administration (NASA), charged with developing technological innovation for the purposes of space exploration. 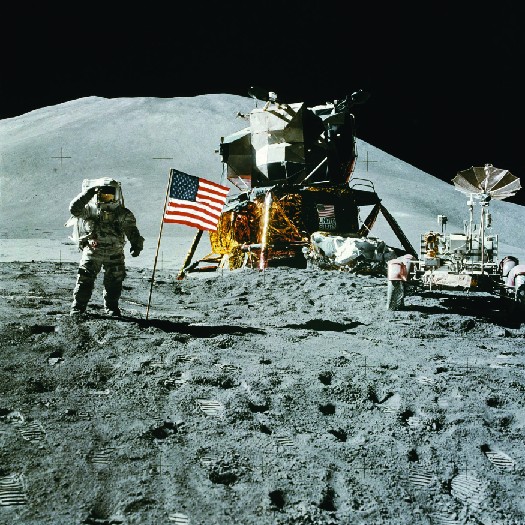 While the category “independent executive agency” may seem very ordinary, the actions of some of these agencies, like NASA, are anything but. (credit: NASA)

The independent regulatory agency emerged in the late nineteenth century as a product of the push to control the benefits and costs of industrialization. The first regulatory agency was the Interstate Commerce Commission (ICC), charged with regulating that most identifiable and prominent symbol of nineteenth-century industrialism, the railroad. Other regulatory agencies, such as the Commodity Futures Trading Commission, which regulates U.S. financial markets and the Federal Communications Commission, which regulates radio and television, have largely been created in the image of the ICC. The Securities and Exchange Commission (SEC) illustrates well the potential power of such agencies. The SEC’s mission has expanded significantly in the digital era beyond mere regulation of stock floor trading. 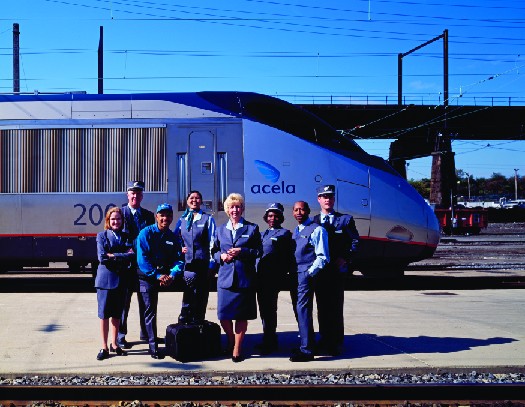 Had the U.S. government not created Amtrak in the 1970s, passenger rail service might have ceased to exist in the United States. (credit: the Library of Congress)

Bureaucrats must implement and administer a wide range of policies and programs as established by congressional acts or presidential orders. Depending upon the agency’s mission, a bureaucrat’s roles and responsibilities vary greatly, from regulating corporate business and protecting the environment to printing money and purchasing office supplies. Bureaucrats are government officials subject to legislative regulations and procedural guidelines. Because they play a vital role in modern society, they hold managerial and functional positions in government; they form the core of most administrative agencies. Although many top administrators are far removed from the masses, many interact with citizens on a regular basis.

Given the power bureaucrats have to adopt and enforce public policy, they must follow several legislative regulations and procedural guidelines. A regulation is a rule that permits government to restrict or prohibit certain behaviors among individuals and corporations. Bureaucratic rulemaking is a complex process that will be covered in more detail in the following section, but the rulemaking process typically creates procedural guidelines, or more formally, standard operating procedures. These are the rules that lower-level bureaucrats must abide by regardless of the situations they face.

Elected officials are regularly frustrated when bureaucrats seem not follow the path they intended. As a result, the bureaucratic process becomes inundated with red tape. This is the name for the procedures and rules that must be followed to get something done. Citizens frequently criticize the seemingly endless networks of red tape they must navigate in order to effectively utilize bureaucratic services, although these devices are really meant to ensure the bureaucracies function as intended.

red tape–the mechanisms, procedures, and rules that must be followed to get something done