Media: What is their function?

What started as print (media) journalism was subsequently supplemented by radio coverage, then network television, followed by cable television. Now, with the addition of the Internet, blogs and social media—a set of applications or web platforms that allow users to immediately communicate with one another—give citizens a wide variety of sources for instant news of all kinds. The Internet also allows citizens to initiate public discussion by uploading images and video for viewing, such as videos documenting interactions between citizens and the police, for example. Provided we are connected digitally, we have a bewildering amount of choices for finding information about the world. In fact, some might say that compared to the tranquil days of the 1970s, when we might read the morning newspaper over breakfast and take in the network news at night, there are now too many choices in today’s increasingly complex world of information. This reality may make the news media all the more important to structuring and shaping narratives about U.S. politics. The proliferation of competing information sources like blogs and social media may actually weaken the power of the news media relative to the days when news media monopolized our attention.

The term media defines a number of different communication formats from television media, which share information through broadcast airwaves, to print media, which rely on printed documents. The collection of all forms of media that communicate information to the general public is called mass media, including television, print, radio, and Internet. One of the primary reasons citizens turn to the media is for news. We expect the media to cover important political and social events and information in a concise and neutral manner.

To accomplish its work, the media employs a number of people in varied positions. Journalists and reporters are responsible for uncovering news stories by keeping an eye on areas of public interest, like politics, business, and sports. Once a journalist has a lead or a possible idea for a story, he or she researches background information and interviews people to create a complete and balanced account. Editors work in the background of the newsroom, assigning stories, approving articles or packages, and editing content for accuracy and clarity. Publishers are people or companies that own and produce print or digital media. They oversee both the content and finances of the publication, ensuring the organization turns a profit and creates a high-quality product to distribute to consumers. Producers oversee the production and finances of visual media, like television, radio, and film.

The work of the news media should differ from public relations, which is communication carried out to improve the image of companies, organizations, or candidates for office. Public relations is not a neutral information form, and accusations abound against media outlets acting as partisan promoters rather than ethically neutral journalists. While journalists write stories to inform the public, a public relations spokesperson helps an individual or organization get positive press. Public relations materials normally appear as press releases or paid advertisements in newspapers and other media outlets. Some less reputable publications, however, publish paid articles under the news banner, blurring the line between journalism and public relations.

Each form of media has its own complexities and is used by different demographics. 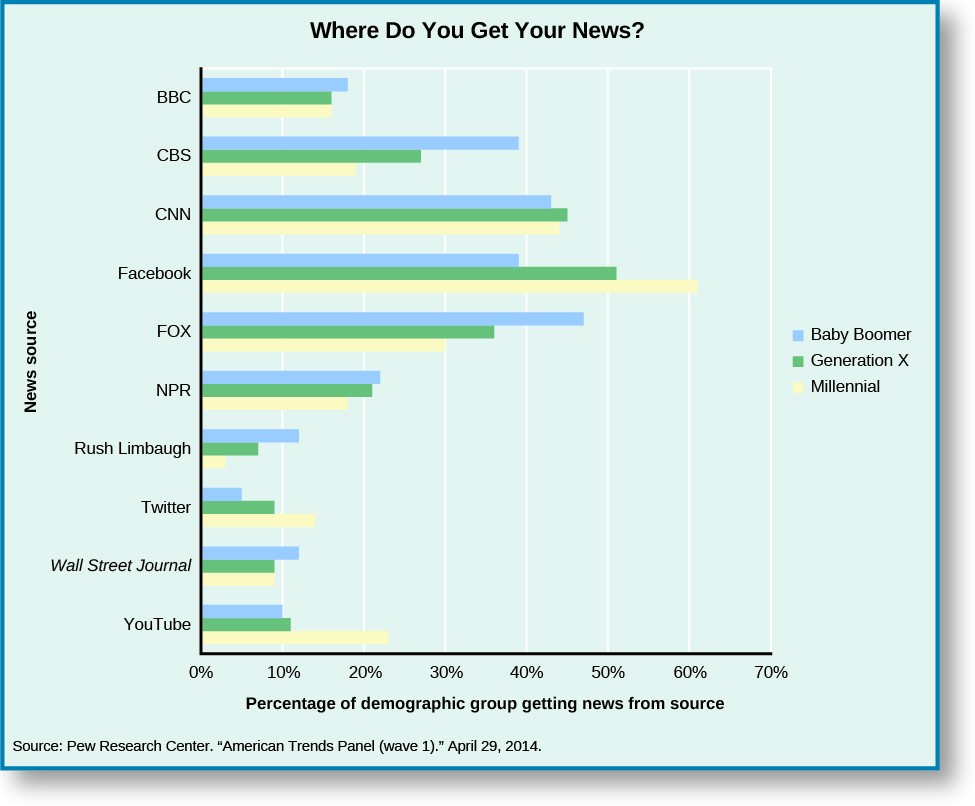 Before the existence of cable and fiber optics, networks needed to own local affiliates to have access to the local station’s transmission towers. Towers have a limited radius, so each network needed an affiliate in each major city to reach viewers. While cable technology has lessened networks’ dependence on aerial signals, some viewers still use antennas and receivers to view programming broadcast from local towers.

Affiliates, by agreement with the networks, give priority to network news and other programming chosen by the affiliate’s national media corporation. Local affiliate stations are told when to air programs or commercials, and they diverge only to inform the public about a local or national emergency.

Most affiliate stations will show local news before and after network programming to inform local viewers of events and issues. Network news has a national focus on politics, international events, the economy, and more. Local news, on the other hand, is likely to focus on matters close to home, such as regional business, crime, sports, and weather.[1]

Cable programming offers national networks a second method to directly reach local viewers. As the name implies, cable stations transmit programming directly to a local cable company hub, which then sends the signals to homes through coaxial or fiber optic cables. Because cable does not broadcast programming through the airwaves, cable networks can operate across the nation directly without local affiliates. Instead they purchase broadcasting rights for the cable stations they believe their viewers want. For this reason, cable networks often specialize in different types of programming.

The on-demand nature of the Internet has created many opportunities for news outlets. Unfortunately, the proliferation of online news has also increased the amount of poorly written material with little editorial oversight, and readers must be cautious when reading Internet news sources. Even large news outlets, like the Associated Press, have published articles with errors in their haste to get a story out.

The Internet also facilitates the flow of information through social media, which allows users to instantly communicate with one another and share with audiences that can grow exponentially. Social media changes more rapidly than the other media formats. A growing number of these sites also allow users to comment anonymously, leading to increases in threats and abuse. The site 4chan, for example, was linked to the 2015 shooting at an Oregon community college.[2]

Regardless of where we get our information, the various media avenues available today, versus years ago, make it much easier for everyone to be engaged. The question is: Who controls the media we rely on? Most media are controlled by a limited number of conglomerates. A conglomerate is a corporation made up of a number of companies, organizations, and media networks. In the 1980s, more than fifty companies owned the majority of television and radio stations and networks. Now, only six conglomerates control most of the broadcast media in the United States: CBS Corporation, Comcast, Time Warner, 21st Century Fox (formerly News Corporation), Viacom, and The Walt Disney Company.[3]

The Walt Disney Company, for example, owns the ABC Television Network, ESPN, A&E, and Lifetime, in addition to the Disney Channel. Viacom owns BET, Comedy Central, MTV, Nickelodeon, and Vh2. Time Warner owns Cartoon Network, CNN, HBO, and TNT, among others. While each of these networks has its own programming, in the end, the conglomerate can make a policy that affects all stations and programming under its control. 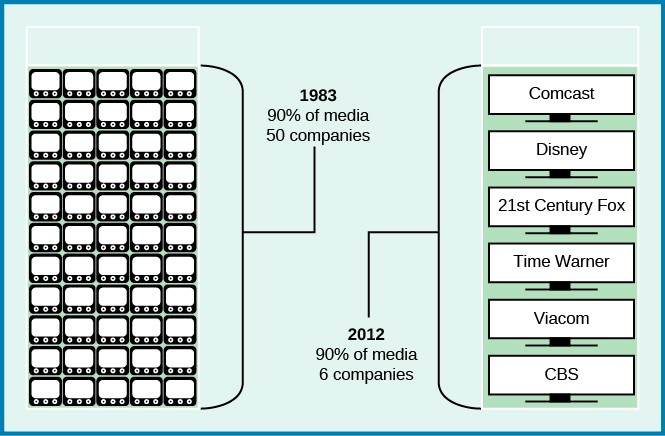 Conglomerates can create a monopoly on information by controlling a sector of a market. When a media conglomerate has policies or restrictions, they will apply to all stations or outlets under its ownership, potentially limiting the information citizens receive. Conglomerate ownership also creates circumstances in which censorship may occur.

Newspapers too have experienced the pattern of concentrated ownership. Gannett Company, while also owning television media, holds a large number of newspapers and news magazines in its control. Many of these were acquired quietly, without public notice or discussion. Gannett’s 2013 acquisition of publishing giant A.H. Belo Corporation caused some concern and news coverage, however. The sale would have allowed Gannett to own both an NBC and a CBS affiliate in St. Louis, Missouri, giving it control over programming and advertising rates for two competing stations. The U.S. Department of Justice required Gannett to sell the station owned by Belo to ensure market competition and multi-ownership in St. Louis.[4]

If you are concerned about the lack of variety in the media and the market dominance of media conglomerates, the non-profit organization, Free Press, tracks and promotes open communication.

These changes in the format and ownership of media raise the question whether the media still operate as an independent source of information. Is it possible that corporations and CEOs now control the information flow, making profit more important than the impartial delivery of information? The reality is that media outlets, whether newspaper, television, radio, or Internet, are businesses. They have expenses and must raise revenues. At the same time, we expect the media to entertain, inform, and alert us without bias. The media may also serve as a point of access for the public. The media must provide some public services, while following laws and regulations. Reconciling these goals may not always be possible.

Functions of the Media

The media exist to fill a number of functions. Whether the medium is a newspaper, a radio, or a television newscast, a corporation behind the scenes must bring in revenue and pay for the cost of the product. Revenue comes from advertising and sponsors. Corporations will not pay for advertising if there are no viewers or readers.

The media should also functionas watchdogs of society and of public officials. Some refer to the media as the fourth estate, with the branches of government being the first three estates and the media equally participating as the fourth. This role helps maintain the republic and keeps the government accountable for its actions, even if a branch of the government is reluctant to open itself to public scrutiny. As much as social scientists would like citizens to be informed and involved in politics and events, the reality is that we are not. So the media, especially journalists, keep an eye on what is happening and sounds an alarm when the public needs to pay attention.[5]

The media also engages in agenda setting, which is the act of choosing which issues or topics deserve public discussion. For example, in the early 1980s, famine in Ethiopia drew worldwide attention, which resulted in increased charitable giving to the country. Yet the famine had been going on for a long time before it was discovered by western media. Even after the discovery, it took video footage to gain the attention of the British and U.S. populations and start the aid flowing.[6]

Today, numerous examples of agenda setting show how important the media are when trying to prevent further emergencies or humanitarian crises. In the spring of 2015, when the Dominican Republic was preparing to exile Haitians and undocumented (or under documented) residents, major U.S. news outlets remained silent. However, once the story had been covered several times by Al Jazeera, a state-funded broadcast company based in Qatar, ABC, the New York Times, and other network outlets followed.[7] With major network coverage came public pressure for the U.S. government to act on behalf of the Haitians.[8]

The agenda-setting power of traditional media is often appropriated by social media and smartphones. Tumblr, Facebook, YouTube, and other Internet sites allow witnesses to instantly upload images and accounts of events and forward the link to friends. Some uploads go viral and attract the attention of the mainstream media, but large network newscasts and major newspapers are still more powerful at initiating or changing a discussion.

While journalists reporting the news try to present information in an unbiased fashion, sometimes they put forth opinions and analysis of complicated issues.

print media–newspapers, news magazines, news you may hold in your hand

public relations–biased communication intended to improve the image of people, companies, or organizations