James Joyce began writing his great collection of short stories in 1904 and saw them published in 1914, after a protracted battle with various publishers and printers in Dublin who were disinclined to see into print a book which promised to cause such offence. It was not merely a battle about good taste and the use of the word ‘bloody’: in his mostly bleak and unflattering stories Joyce had chosen to name particular places, specifying real-life pubs and shops and churches, something which his printers had been advised was potentially libellous. Joyce was naturally frustrated by such obstructive small-mindedness, which served to strengthen his spirit of artistic belligerence: he set out to offend both social conformity and prevailing taste. In the essay ‘The Day of the Rabblement’ (1901) he professed the artist’s duty to despise ‘the multitude’; and, moved by the example of the great Norwegian playwright Ibsen, he contemptuously rejected any thought that art mattered for ‘its religious, its moral, its beautiful, its idealizing tendencies’: ‘Art is true to itself when it deals with truth’ (‘Drama and Life’).[1]

‘The Day of the Rabblement’, an essay by James Joyce 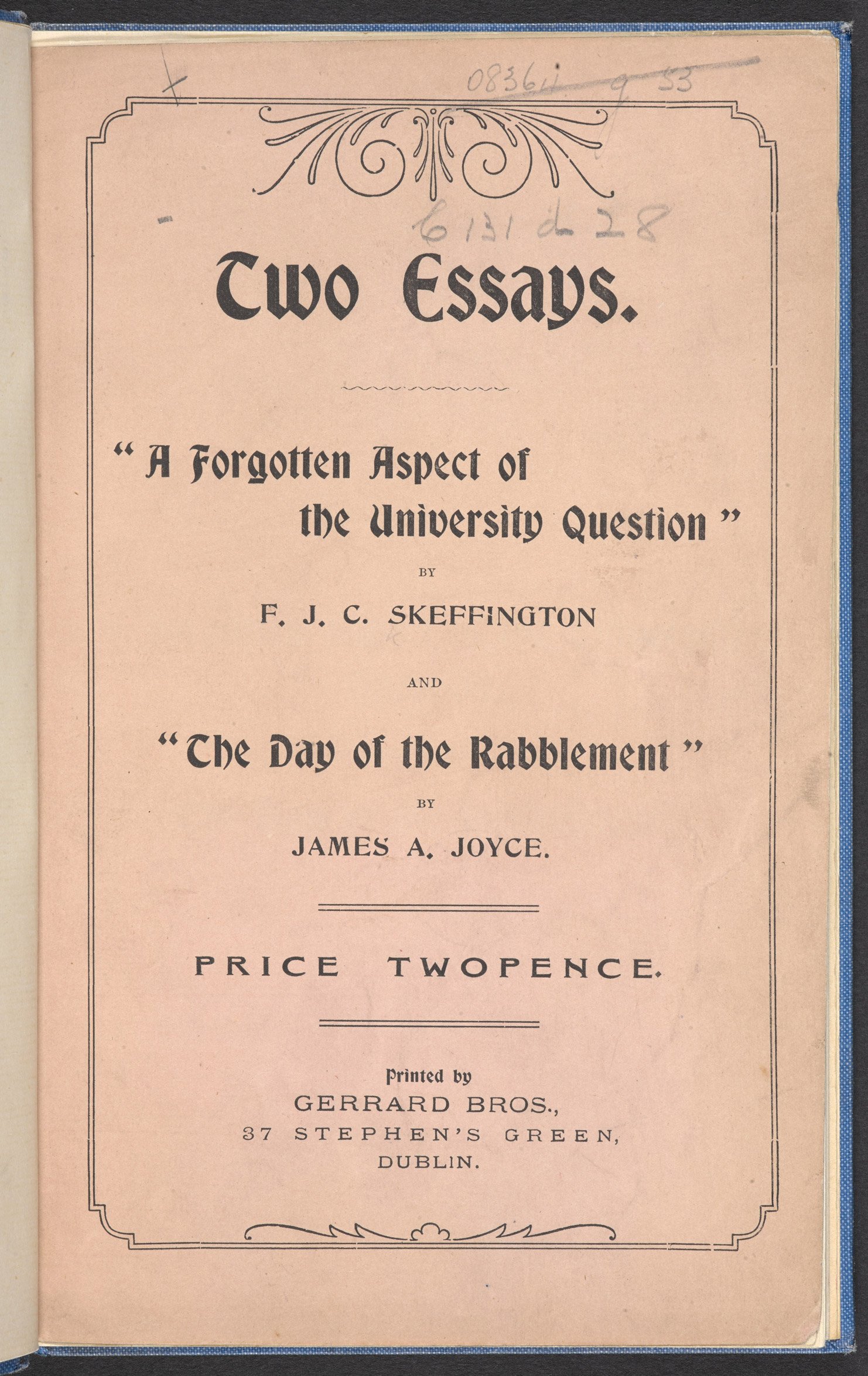 ‘The Day of the Rabblement’, written by James Joyce when he was 19 years old and attending University College, Dublin, concerns the state of Irish theatre and the importance of artistic freedom. 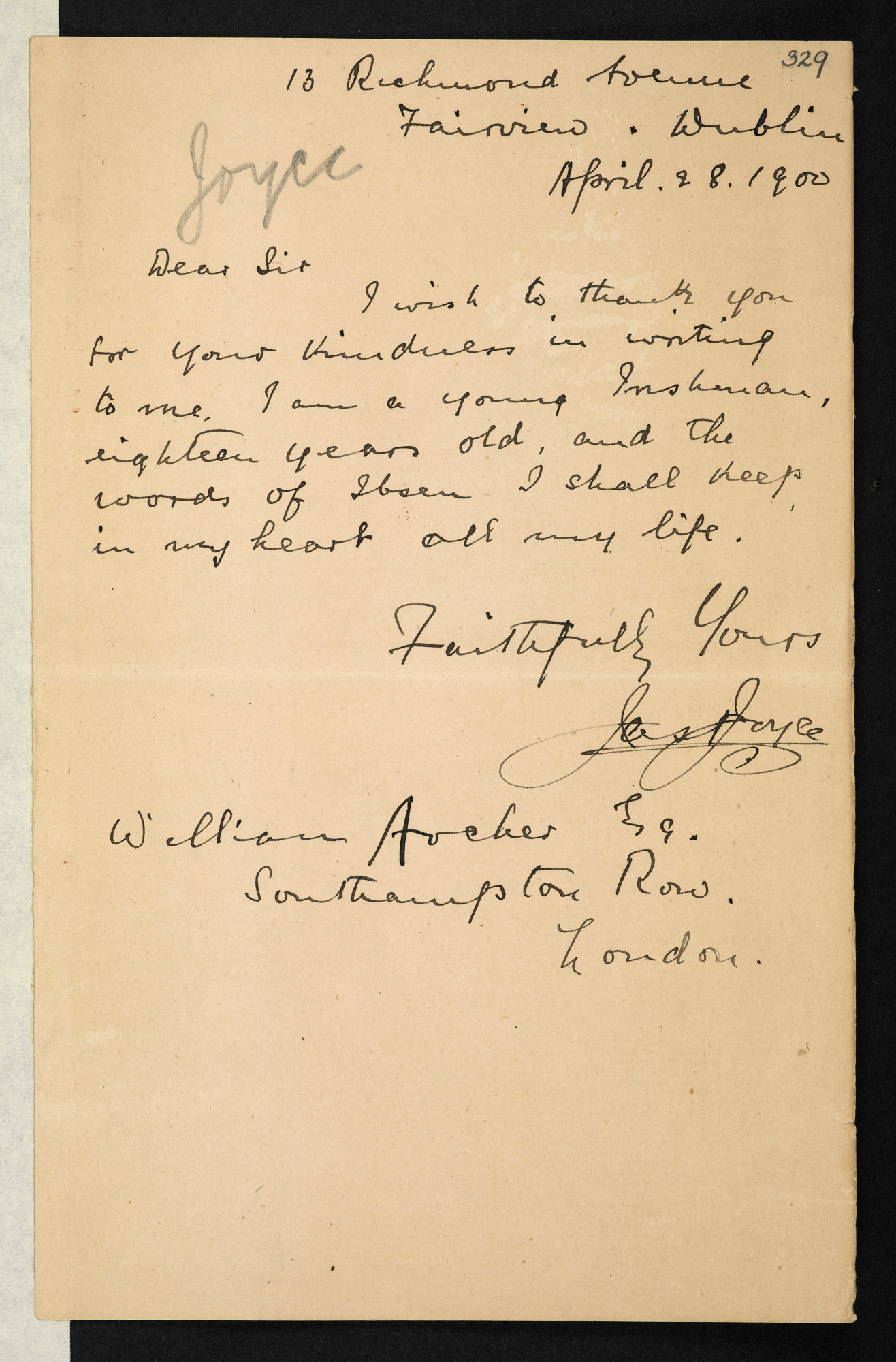 This brief letter reveals the importance of the Norwegian playwright Henrik Ibsen to James Joyce as a young man.

He liked to present himself heroically as a kind of stiff cathartic medicine, purging the Irish imagination of its toxins, surrounded by lesser talents peddling an obsolete kind of romanticism: ‘That they may dream their dreamy dreams / I carry off their filthy streams’ (‘The Holy Office’).[2] ‘It is not my fault’, he told Grant Richards, who would eventually publish the volume, ‘that the odour of ashpits and old weeds and offal hangs round my stories. I seriously believe that you will retard the course of civilisation in Ireland by preventing the Irish people from having one good look at themselves in my nicely polished looking-glass’.[3]

‘Gas from a Burner’ by James Joyce

James Joyce composed ‘Gas from a Burner’ in response to learning that the printed sheets of his short-story collection Dubliners had been destroyed by the printer John Falconer, following several previous publication rejections.

‘The Holy Office’, a poem by James Joyce 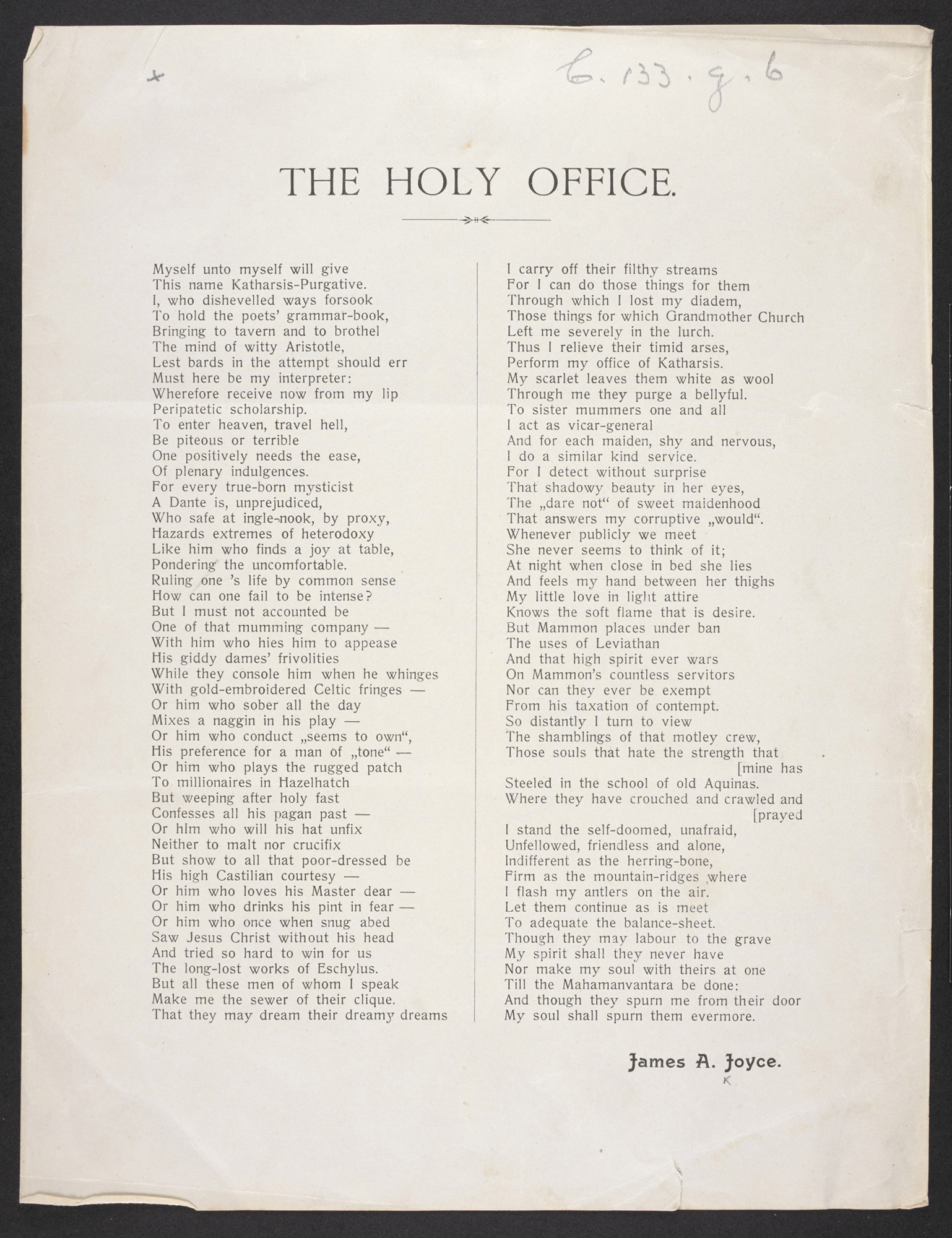 ‘The Holy Office’ is a satirical poem by James Joyce that strikes back at contemporary Irish authors and posits an alternative artistic vision.

So the stories of Dubliners were studies in stark realism, understood both as a style and as a moral, indeed moralising, stance: the book has the characteristically modern ambition to tell things the way they really are. Its atmosphere resembles that of the drab, disconnective and emotionally dysfunctional London in Walter Sickert’s contemporaneous paintings Ennui (1914), Off to the Pub (1911) or Dawn, Camden Town (1909), or of T S Eliot’s The Waste Land (1922), upon which Joyce was an important influence. The note of the volume is struck uncompromisingly in its opening sentence: ‘There was no hope for him this time’; and as many commentators have remarked, the paralysis that afflicts the broken priest in ‘The Sisters’ goes on to feature metaphorically as the prevailing condition of Dublin at large, ‘the sleepy Irish capital’ as he once called it, though the sleep is a troubled one.[4] ‘I call the series Dubliners’, he wrote to a friend, ‘to betray the soul of that hemiplegia or paralysis which many consider a city’.[5] The stories are studies in incapacity and self-replicating unhappiness: a young woman has a chance to elope to Buenos Aires but cannot bring herself to seize the chance (‘Eveline’); a thwarted middle-aged man flinches from human contact and destroys the one person with whom he had a chance of a relationship (‘A Painful Case’); an inadequate man who is persecuted by his boss comes home drunk and terrorises his boy (‘Counterparts’); a group of faded men fruitlessly turn over the failures of their political hopes (‘Ivy Day in the Committee Room’); a clerk meets up with an old friend who has become a great success in London, and returns to his home full of hate and failure (‘A Little Cloud’); a child is delayed going to a bazaar by the lateness of his forgetful uncle, and belatedly arrives only to find that ‘all the stalls were closed and the greater part of the hall was in darkness’. The anticlimax of that is exemplary: the collection is a succession of masterpieces in the non-event, such as ‘Clay’, the main narrative event of which is a bag of cake getting left on a tram by mistake, a small episode of nothing much happening taken from a larger life where nothing much ever happens.

‘Life we must accept as we see it before our eyes,’ the young Joyce had announced, ‘men and women as we see them in the real world’; and that meant making art out of ‘the dreary sameness of existence’ (‘Drama and Life’).[6] Dublin life is pinched and unheroic: the stories are peopled by clerks, salesmen, cashiers, domestic servants. The book is full of worry – ‘The affair would be sure to be talked of’, entrapped Mr Doran realises in ‘The Boarding House’, ‘and his employer would be certain to hear of it’. It is repeatedly preoccupied by money. Mrs Kearney sticks her heels in for her daughter’s promised fee: ‘If they didn’t pay her to the last farthing she would make Dublin ring’ (‘A Mother’). Farrington pawns his watch to buy more booze, but ends the evening without even the consolation of feeling drunk (‘Counterparts’); Little Chandler spends money he cannot afford on drink, in a vain attempt to keep up with Gallaher (‘A Little Cloud’). The deeply unsavoury Corley sponges a gold coin from his latest young woman, while his seedy disciple Lenehan dreams futilely of ‘some good simple-natured girl with a little of the ready’ (‘Two Gallants’). Maria ‘thought how much better it was to be independent and to have your own money in your pocket’ (‘Clay’); but few of Joyce’s Dubliners win their way to that spurious sense of assurance. Such needling anxieties about money are not tragic or magnificent; they are merely wearisome and banal, part of the purposeful dreariness of a book which is populated (as is an Ibsen play) by characters who ‘may be bores, but the drama in which they live and move is invariably powerful’.[7]

At his most polemical Joyce could sound tough-mindedly disparaging about beauty as an artistic ambition, but the main solace to be found within the bleak world of his stories is the very great beauty with which he writes them; and, something like a Sickert painting, the paradoxical loveliness with which these impeded lives are portrayed comes from a kind of exquisite attention, wholly insignificant events dwelt upon with the same rapt fascination that previous generations of artists would have deployed on heroic or historic subjects. The great Joycean scholar Richard Ellmann put it best: ‘Joyce’s discovery, so humanistic that he would have been embarrassed to disclose it out of context, was that the ordinary is the extraordinary’.[8]

The position is ‘humanistic’: that is, wholly secular; there is nothing transcendental in this world-view; but when the young Joyce privately invented a new genre to capture this new-found extraordinariness, he adopted a religious word – epiphany. The epiphany (meaning ‘manifestation’) was originally the episode in the Christian story when the wise men first saw the infant Jesus: the moment is the first showing of the divine within the world, which is its new home: Joyce takes that thought, but he relocates its spirituality wholly within the frame of the mundane. In his abandoned novel Stephen Hero, which he wrote alongside the short stories, he has Stephen, his spokesman, explain: ‘By an epiphany he meant a sudden spiritual manifestation, whether in the vulgarity of speech or of gesture or in a memorable phase of the mind itself’. The theory sponsors an artistic vocation: ‘He believed that it was for the man of letters to record these epiphanies with extreme care, seeing that they themselves are the most delicate and evanescent of moments’.[9]

Joyce duly collected real epiphanies, glimpses he witnessed of Dublin life, like pencil sketches for paintings. Some are short, atmospheric prose-poems, but the more impressive are captured fragments of talk, defamiliarised into art by their unexpected transcription:

The book of epiphanies went nowhere, but the sketches showed the way to a larger art of poised, unfinished fragments: their memorable, studied inconsequence would become a defining quality of the short story as Joyce reinvented it in Dubliners. ‘Clay’ ends, exemplarily, with nothing like a normal ending to a tale, and the effect is very beautiful. Joyce borrows the worn language of his subjects, achieving an effect of terrific emotional restraint, barely hinting at a range of tragic possibilities (tears, losses, endings, calls for help) without confessing them: ‘and his eyes filled up so much with tears that he could not find what he was looking for and in the end he had to ask his wife to tell him where the corkscrew was’. We discern a significance that is lost on the characters themselves. Joyce’s genius is here minimalist, exploiting the implication of understatement: he called the technique ‘a style of scrupulous meanness’.[11]

Hospitality and ‘The Dead’

The stories emit, as Joyce said, a ‘special odour of corruption’, and he intended them to show how all the ages of Dublin man, from childhood, through adolescence, maturity, and public life, breathed it in.[12] But, writing from abroad, he came to think that he had perhaps been ‘unnecessarily harsh’, partly for neglecting the ‘hospitality’ of Dublin, which he thought unique.[13] The last, last-written, and longest story, ‘The Dead’, makes up that lack, and it is the greatest thing in the book. Joyce offers a funny but sympathetic portrait of his fallible protagonist, Gabriel, well intentioned and gauche, who attends a party given by his ageing aunts, accompanied by his wife, Gretta. At the end of the evening, in their hotel room, she speaks of her first love, a young man called Michael Furey, who has been brought to her mind by hearing at the party a song that he used to sing. The revelation, with which a more straightforward story might have concluded, is that Furey was the love of her life and sacrificed himself for her, in a manner of speaking: for, sick with tuberculosis, he had come to find her in the cold and the rain (‘He was standing at the end of the wall where there was a tree’) and died shortly afterwards. Gretta finally falls asleep after weeping terribly, leaving Gabriel awake, alone, suddenly conscious of the depths of human unknowability, and of the way that the dead are always with us, shaping our lives even when we are not aware of it. Gabriel is defeated by his experience, but it is not remotely a morose story: the comedy of social awkwardness, the boozy, affable spirit of the party, its indoor warmth as opposed to the snow outside, the whole tedious good-natured cheer of it, the boring speeches and banal chatter, are cherished in Joyce’s unsentimental way; and while they are far too realistically humdrum to be counted symbolic forces for ‘life’ set against all the weight of ‘the dead’, still, they do possess a kind of saving vitality. The aunts are worried that Freddy Malins will turn up drunk, as he has done before; but when he arrives he is, it is reported, ‘nearly all right’. ‘The atmosphere of life, as “The Dead” reveals it’, said the critic John Bayley, ‘is “nearly all right”’;[14] and that is the supremely realist note on which Joyce chose to end his Dublin studies.