‘Did Nature supplement what man advanced? Did she complete what he began?’ asks Virginia Woolf in her 1927 novel To the Lighthouse (Part 2, ch. 6). Not any more, according to the novel’s middle section, ‘Part 2: Time Passes’, set during the First World War. ‘Time Passes’ registers instead ‘flesh turned to atoms which drove before the wind’, and a seascape disfigured by ‘ashen-coloured’ naval ships and the oily wreckage their battles leave upon the waves (ch. 6). Torn and tarnished by wartime destruction, nature has lost its conventional power to console. It is impossible ‘to continue, as one walked by the sea, to marvel how beauty outside mirrored beauty within’. Instead, ‘contemplation was unendurable; the mirror was broken’ (ch. 6).

Vanessa Bell dust jacket for To the Lighthouse

‘Time Passes’, the middle section of Virginia Woolf’s novel To the Lighthouse (1927), is set during the First World War.

Poets fighting in France recorded a similar sense of loss. Confronting imminent, near-certain death in Wilfred Owen‘s ‘Spring Offensive’, soldiers turn away from a sunny landscape as if ‘from a friend with whom their love is done’. Scepticism about spring, or nature itself, is still stronger in Owen’s ‘Exposure’, or in ‘Futility’, which wonders why ‘the kind old sun’ ever bothered to warm the world’s cold clays; to stir anything into life; or ‘to break earth’s sleep at all’.

‘Futility’ by Wilfred Owen, published in The Nation 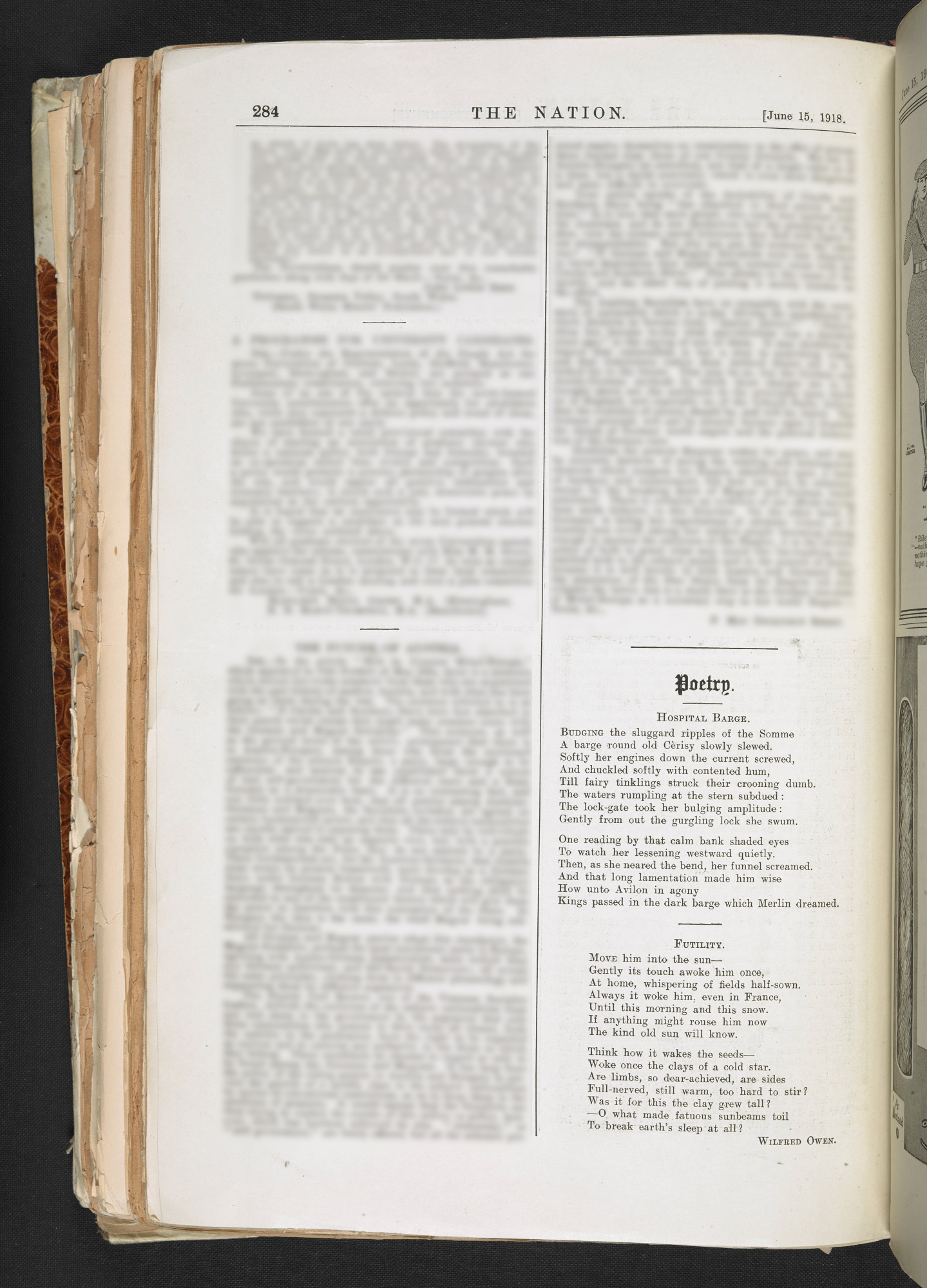 ‘Futility’ was one of just five poems published during Wilfred Owen’s lifetime.

Along with Woolf’s reflections, these poems indicate how deeply the First World War challenged the kind old friendship between imagination and nature – that long-standing pastoral convention, especially beloved of poets since the Romantic period, of ‘beauty outside’ matching the mind within. Scepticism of this convention opened the way for the harsher, dispirited modernist poetry appearing in the 1920s – specifically, in the first lines of T S Eliot’s The Waste Land (1922), likewise considering spring offensive, April as ‘the cruellest month’ and corpses apparently as fertile as vegetation. Like The Waste Land, centred on depressed post-war existence in London, modernist poetry generally turns away from nature towards fractured, uneasy cityscapes. Any consolation for their spiritlessness and confusion, this poetry suggests, may be found only in mythic realms beyond the fractured surface of experience. Or – a possibility Ezra Pound also pursues in The Cantos (1925–70), like Woolf at the end of To the Lighthouse – it may still be discovered within the grace and orderliness of art itself. 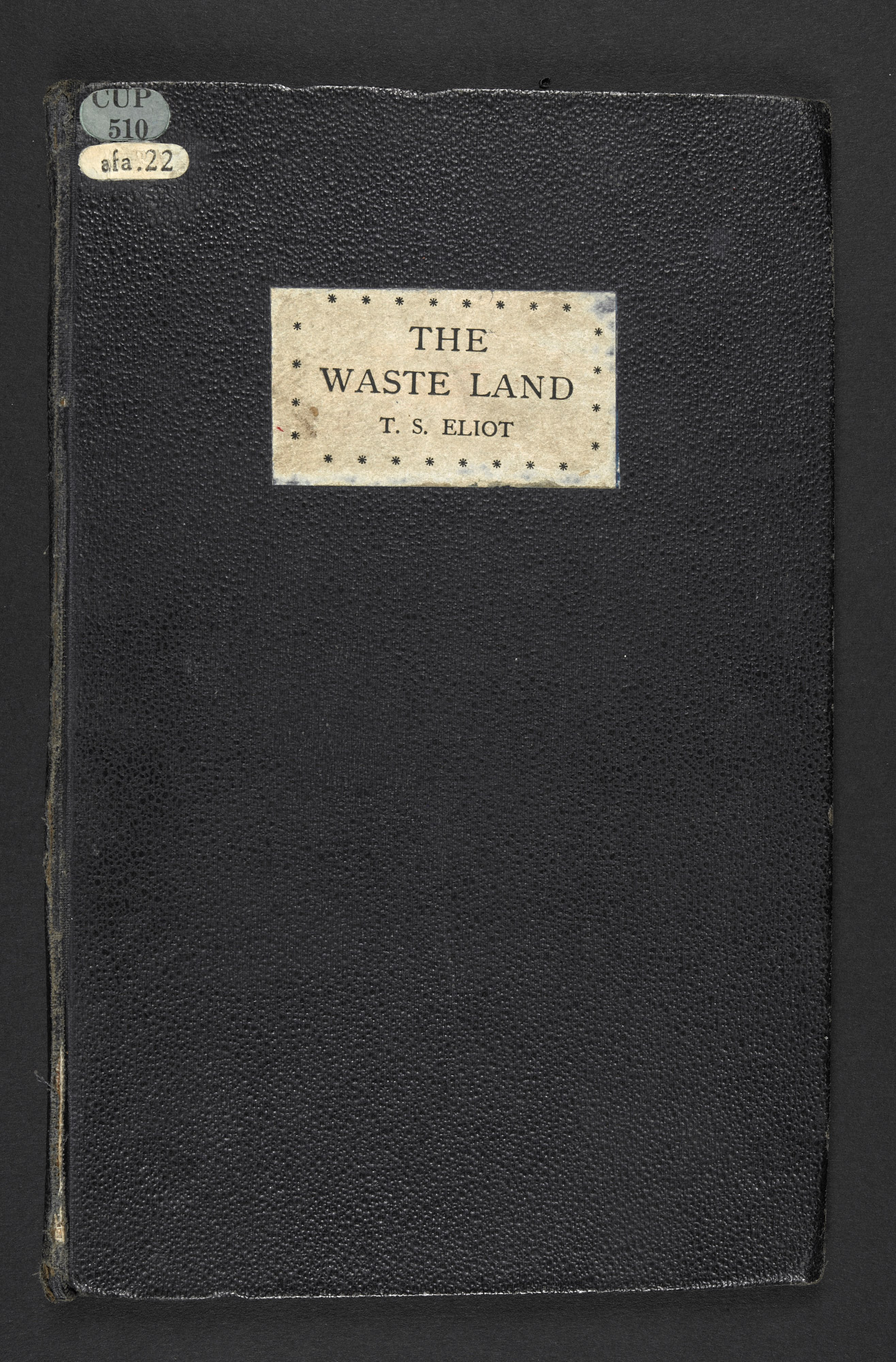 Usage terms: : © Estate of T. S. Eliot. You may not use the material for commercial purposes. Please credit the copyright holder when reusing this work.

View images from this item  (2) 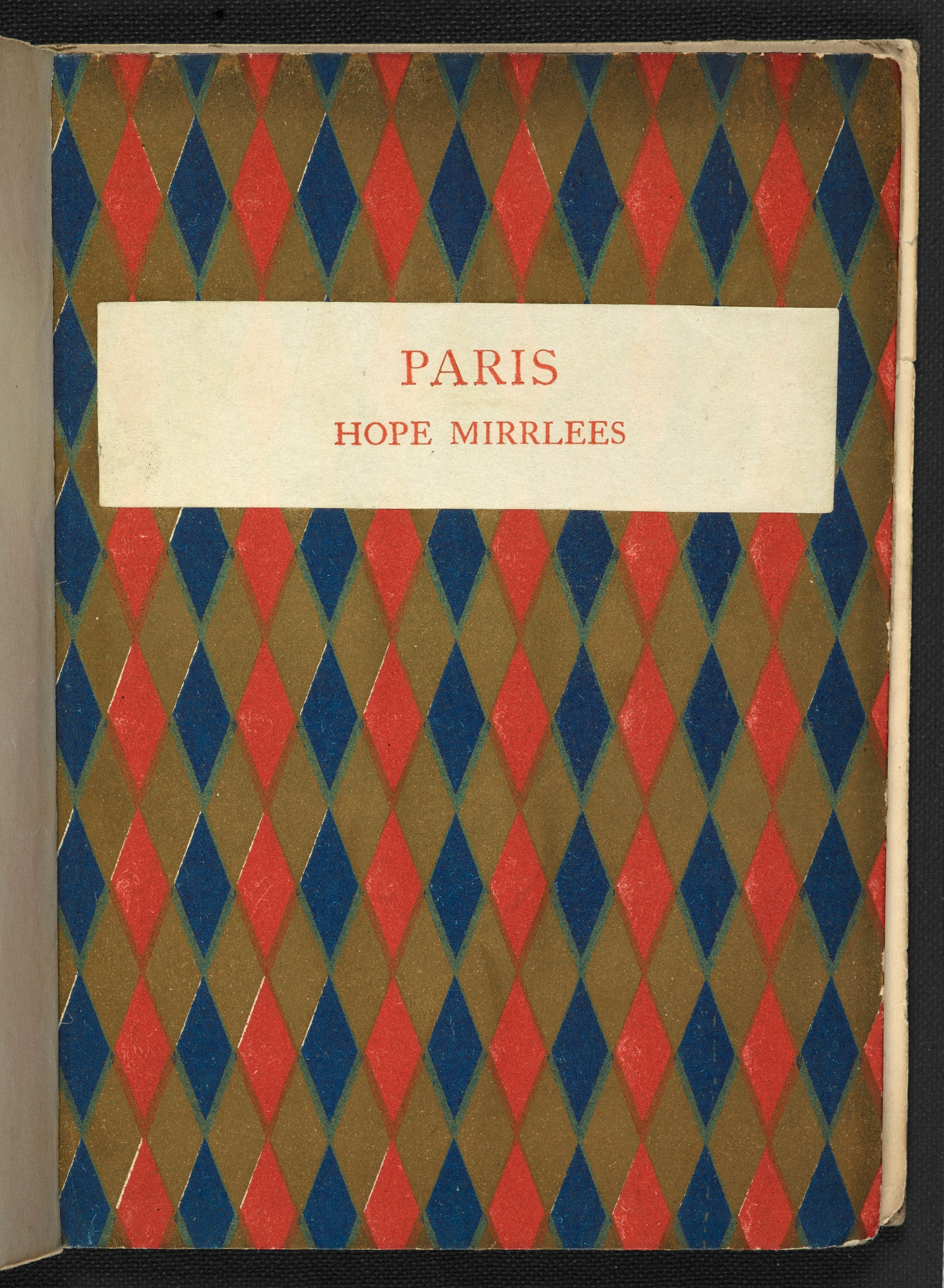 The First World War challenged not only pastoral imagination, but also many of literature’s established forms and devices – in some ways, even the conventional role of language itself. The colossal darkness and violence of the war scarcely allowed the world to be contained in ways James Joycedescribes in A Portrait of the Artist as a Young Man (1916) – ‘mirrored perfectly in a lucid supple periodic prose’ (ch. 4). Chaotic, unprecedented events required of modernist authors new literary languages: new ways of contemplating the world, and of mirroring it in their writing. Woolf indicates one of these in that middle section of To the Lighthouse. Despairing of the mirror of nature, she indicates another kind of refuge from a disorderly world when she remarks that ‘in those mirrors, the minds of men . . . dreams persisted . . . good triumphs, happiness prevails, order rules’ (ch. 6). Instead of seeking ‘beauty outside’, could literature still find order and consolation in the mind within?

Images of War by Richard Aldington, with illustrations by Paul Nash 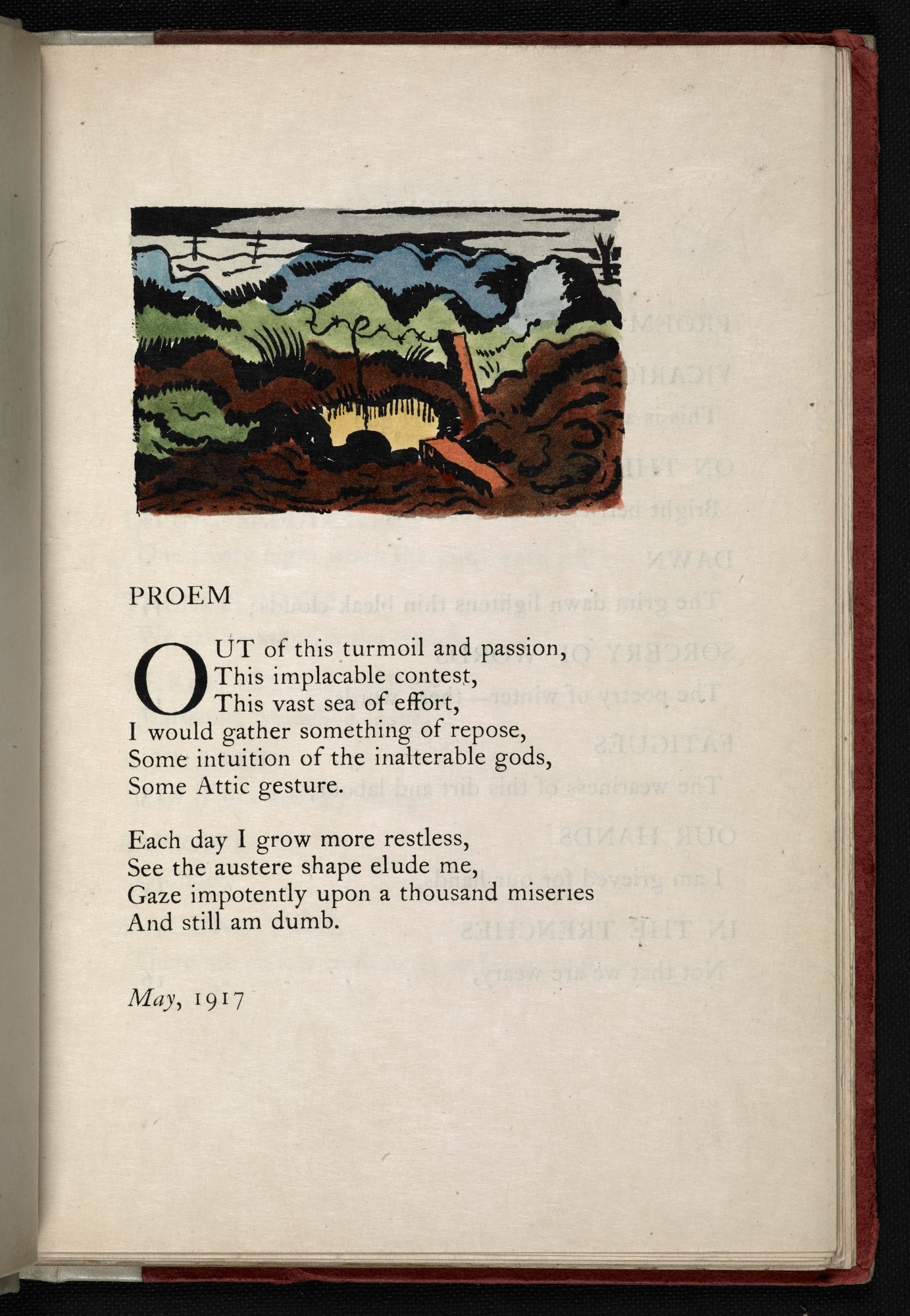 ‘And still am dumb’: Imagist poet Richard Aldington captures the crisis of artistic representation after the events of the war in ‘Proem’ from Images of War, 1919.

BLAST no. 2, the Vorticist magazine 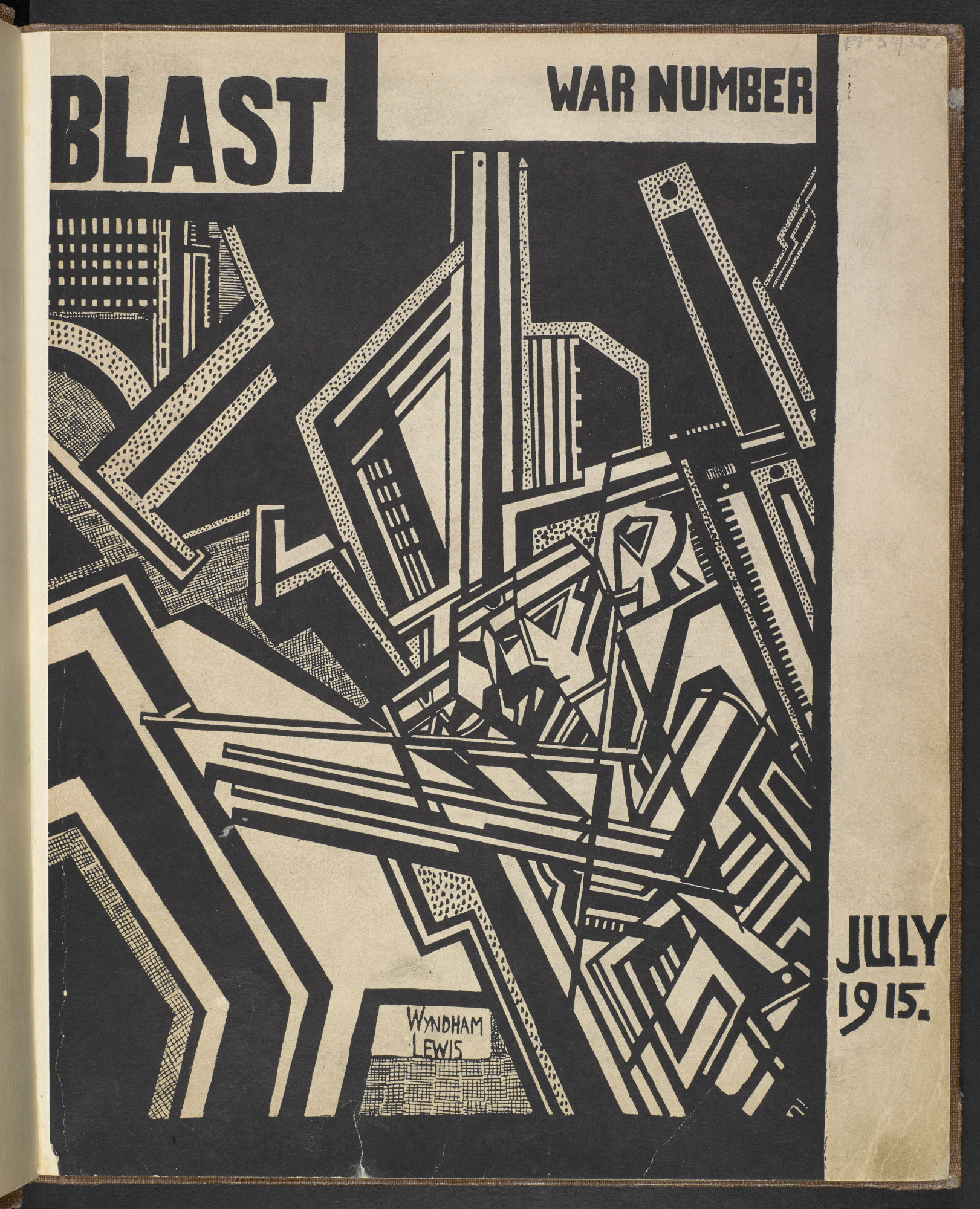 Woolf had already recommended concentration on the mind’s mirroring in an essay written a few months after the Armistice. In ‘Modern Novels’ she suggests that – rather than surveying an external, material world – the novel should represent the ‘myriad impressions’ of daily consciousness, recording ‘the atoms as they fall upon the mind’.[1] By early 1919, when her essay appeared, Woolf could point to striking examples of the writing she recommends: in James Joyce’s representation of inner consciousness in early sections of Ulysses, eventually completed and published in 1922. During the 1920s, authors including Ford Madox Ford and Woolf herself went on to develop styles similar to Joyce’s celebrated stream of consciousness. In Woolf’s case, interior monologues are used extensively in To the Lighthouse, and in following, in Mrs Dalloway (1925), a character’s responses to a London society scarcely recovered from the shock of the war.

Ulysses by James Joyce, published by Shakespeare and Company 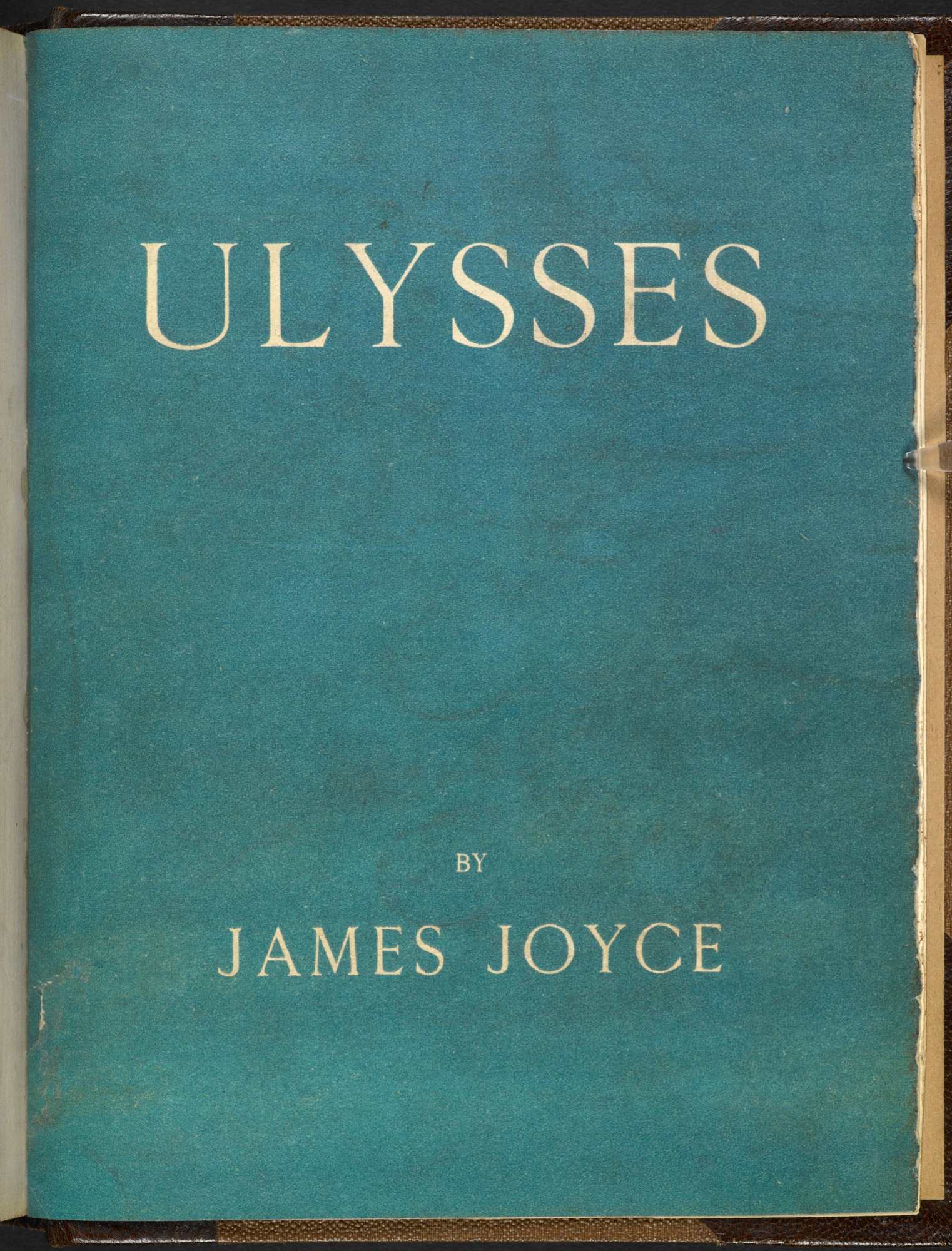 James Joyce pioneered the stream of consciousness technique in Ulysses. The novel was serialised 1918─20 and published by Shakespeare and Company in 1922. Usage terms: : © The Society of Authors as the Literary Representative of the Estate of Virginia Woolf. You may not use the material for commercial purposes. Please credit the copyright holder when reusing this work.

‘The war might was really done with now’: The first mention of World War One from a manuscript draft of Mrs Dalloway, 1924.

Other advantages were offered by new concentration on inner thought and feeling. Rupturing the sense of the stream of time, the First World War added powerfully to the tendencies of modern novelists to conceive time as divided or fractured rather than – or sometimes as well as – seamlessly flowing. In a later essay, Woolf recalled the war seeming ‘like a chasm in a smooth road’.[2] Modernist writing repeatedly figures the war in this divisive, cutting role, slicing across time and history as sharply as the trenches cut across space on the battlefields. This sense of historical fracture is vividly dramatised in To the Lighthouse, whose short, sharp middle section intrudes painfully upon the placid, pre-war family life described in the novel’s first part. In its third part, the war’s ‘chasm’ is partly bridged by means of memories, recovering these happier earlier days. Similar tactics shape Mrs Dalloway. Woolf’s central figure regularly looks back, during a June day in 1923, on the promise of romance, and of life generally, 30 years previously, long before the war darkened the world.

Around the time of her ‘Modern Novels’ essay, Woolf was already reading Marcel Proust’s A la recherche du temps perdu (1913–27), translated into English during the 1920s as Remembrance of Things Past. Proust’s attempts to recover or almost re-inhabit the past, through memory – and his title (literally ‘In Search of Lost Time’) – indicate one of the central interests of modernist fiction. Woolf insisted in ‘Modern Novels’ that writers should record atoms of impression ‘in the order in which they fall . . . however disconnected’. By following the sometimes random patternings of mind and memory, modernist writers could depart from the conventionally serial, chronological order of earlier fiction. Such departures sometimes emphasise the fractured, disorderly nature of war-time experience – in Ford’s Parade’s End tetralogy (1924–28), for example. Yet in other fiction they can offer consoling reconnections with remembered and less troubled times. Like T S Eliot in The Waste Land, modernist novelists present contemporary life as fractured and fragmented, yet still seek some unity or fulfilment beyond its troubled surface.

Did modernist writing develop only in response to this troubled, war-ravaged world? Evidently not. The first book of Proust’s multi-volume novel appeared in 1913, a year before the outbreak of the First World War. As Woolf was well aware, in novels such as Lord Jim (1900) and The Secret Agent (1907), Joseph Conrad was already writing the kind of fiction she recommends in ‘Modern Novels’ – focussed through individual perspectives and impressions, and innovative in chronology and structure. From his first arrival in London in 1908, Ezra Pound had demanded that poets and artists ‘make it new’. T S Eliot showed an inclination to do so as early as 1909, in poems such as ‘Rhapsody on a Windy Night’, which describes the kind of soulless, mechanical modern life further explored in ‘The Love Song of J. Alfred Prufrock’ (1917) and extensively in The Waste Land. Movements towards literary innovation, in other words, were already visible before the war.

So were many of the negative aspects of modernity, mechanisation and industrialisation, altering life and society in ways already beginning to demand new forms of artistic representation. Yet it was the First World War itself which made the destructive aspects of modernity inescapable and the need for new artistic forms unavoidable. D H Lawrence’s The Rainbow (1915) and Women in Love (1920), once conceived as a single novel, confirm the scale and nature of the change. In The Rainbow, largely completed before the war, modern industrialisation is shown as a threat, but one still leaving possibilities for escape or redemption, often through surviving contacts with the natural world. Women in Love, on the other hand, was completed during the disastrous battles of the Somme. As Lawrence himself describes, this novel ‘does contain the results in one’s soul of the war’, offering a ‘purely destructive’ vision, with little hope of resisting the mechanising, regimenting effects of a modern industrial society.[3] ‘Returning to the Trenches’ by C R W Nevinson, 1916. Like modernist literature, the pioneering art of this period responded to modern industrialisation and mechanisation within the context of the First World War. View images from this item  (3)

These effects were of course felt still more sharply in the regimented life and death of the army – in the mechanical slaughter wrought by tanks, artillery and machine-guns in the trenches of the First World War. The ‘war machine’ Siegfried Sassoon describes in his fictionalised memoir Sherston’s Progress(1936) ensured that soldiers lived and died almost ‘automatically’, with negligible prospects, or none, of controlling their own fate (ch. 4). This sense of negated will and agency is also highlighted in Owen poems such as ‘Anthem for Doomed Youth’ or ‘The Send-Off’ – the latter describing soldiers despatched to the front anonymously, mechanically, like cattle. Such threats to the autonomy, agency and dignity of individual life – along with the First World War’s gigantic destruction of life itself – made ‘contemplation . . . unendurable’ unless artists could create new spheres of order, affirmation, or escape; new mirrors to hold up to a broken world. The urgency of this need for new devices, and the ingenuity with which modernist writers addressed it, made the 1920s one of the most inventive and successful decades in the history of literature. Whether this achievement ultimately offers much consolation for the losses of the First World War – or even any – is another question.