Values help shape a society by suggesting what is good and bad, beautiful and ugly, sought or avoided. Consider the value that the United States places upon youth. Children represent innocence and purity, while a youthful adult appearance signifies sexuality. Shaped by this value, individuals spend millions of dollars each year on cosmetic products and surgeries to look young and beautiful. The United States also has an individualistic culture, meaning people place a high value on individuality and independence. In contrast, many other cultures are collectivist, meaning the welfare of the group and group relationships are a primary value.

Values often suggest how people should behave, but they don’t accurately reflect how people do behave. Values portray an ideal culture, the standards society would like to embrace and live up to. But ideal culture differs from real culture, the way society actually is, based on what occurs and exists. In an ideal culture, there would be no traffic accidents, murders, poverty, or racial tension. But in real culture, police officers, lawmakers, educators, and social workers constantly strive to prevent or repair those accidents, crimes, and injustices. American teenagers are encouraged to value celibacy. However, the number of unplanned pregnancies among teens reveals that not only is the ideal hard to live up to, but the value alone is not enough to spare teenagers the potential consequences of having sex.

One way societies strive to put values into action is through rewards, sanctions, and punishments. When people observe the norms of society and uphold its values, they are often rewarded. A boy who helps an elderly woman board a bus may receive a smile and a “thank you.” A business manager who raises profit margins may receive a quarterly bonus. People sanction certain behaviors by giving their support, approval, or permission, or by instilling formal actions of disapproval and nonsupport. Sanctions are a form of social control, a way to encourage conformity to cultural norms. Sometimes people conform to norms in anticipation or expectation of positive sanctions: good grades, for instance, may mean praise from parents and teachers. From a criminal justice perspective, properly used social control is also inexpensive crime control. Utilizing social control approaches pushes most people to conform to societal rules, regardless of whether authority figures (such as law enforcement) are present. 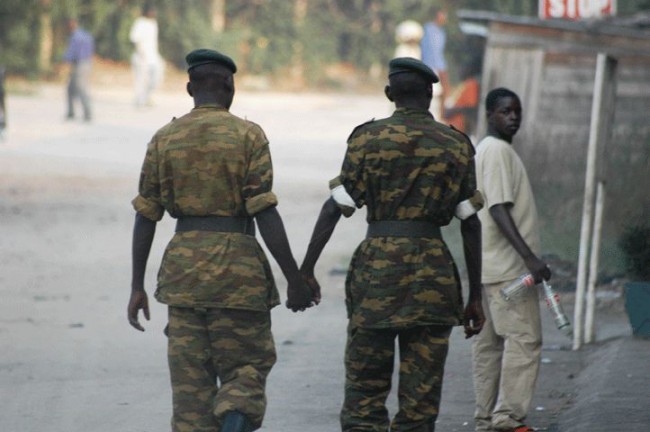 In many parts of Africa and the Middle East, it is considered normal for men to hold hands in friendship. How would Americans react to these two soldiers? (Photo courtesy of Geordie Mott/Wikimedia Commons)

Values are not static; they vary across time and between groups as people evaluate, debate, and change collective societal beliefs. Values also vary from culture to culture. For example, cultures differ in their values about what kinds of physical closeness are appropriate in public. It’s rare to see two male friends or coworkers holding hands in the United States where that behavior often symbolizes romantic feelings. But in many nations, masculine physical intimacy is considered natural in public. This difference in cultural values came to light when people reacted to photos of former president George W. Bush holding hands with the Crown Prince of Saudi Arabia in 2005. A simple gesture, such as hand-holding, carries great symbolic differences across cultures.

1. The existence of social norms, both formal and informal, is one of the main things that inform ___________, otherwise known as a way to encourage social conformity.

sanctions:
a way to authorize or formally disapprove of certain behaviors