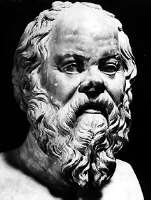 In his use of critical reasoning, by his unwavering commitment to truth, and through the vivid example of his own life, fifth-century Athenian Socrates set the standard for all subsequent Western philosophy. Since he left no literary legacy of his own, we are dependent upon contemporary writers like Aristophanes and Xenophon for our information about his life and work. As a pupil of Archelaus during his youth,Socrates showed a great deal of interest in the scientific theories of Anaxagoras, but he later abandoned inquiries into the physical world for a dedicated investigation of the development of moral character. Having served with some distinction as a soldier at Delium and Amphipolis during the Peloponnesian War, Socrates dabbled in the political turmoil that consumed Athens after the War, then retired from active life to work as a stonemason and to raise his children with his wife, Xanthippe. After inheriting a modest fortune from his father, the sculptor Sophroniscus, Socrates used his marginal financial independence as an opportunity to give full-time attention to inventing the practice of philosophical dialogue.

For the rest of his life, Socrates devoted himself to free-wheeling discussion with the aristocratic young citizens of Athens, insistently questioning their unwarranted confidence in the truth of popular opinions, even though he often offered them no clear alternative teaching. Unlike the professional Sophists of the time, Socrates pointedly declined to accept payment for his work with students, but despite (or, perhaps, because) of this lofty disdain for material success, many of them were fanatically loyal to him. Their parents, however, were often displeased with his influence on their offspring, and his earlier association with opponents of the democratic regime had already made him a controversial political figure. 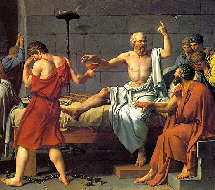 Although the amnesty of 405 forestalled direct prosecution for his political activities, an Athenian jury found other charges—corrupting the youth and interfering with the religion of the city—upon which to convict Socrates, and they sentenced him to death in 399 B.C.E. Accepting this outcome with remarkable grace, Socrates drank hemlock and died in the company of his friends and disciples.

Our best sources of information about Socrates’s philosophical views are the early dialogues of his student Plato, who attempted there to provide a faithful picture of the methods and teachings of the master. (Although Socrates also appears as a character in the later dialogues of Plato, these writings more often express philosophical positions Plato himself developed long after Socrates’s death.) In the Socratic dialogues, his extended conversations with students, statesmen, and friends invariably aim at understanding and achieving virtue {Gk. αρετη [aretê]} through the careful application of a dialectical method that employs critical inquiry to undermine the plausibility of widely-held doctrines. Destroying the illusion that we already comprehend the world perfectly and honestly accepting the fact of our own ignorance, Socrates believed, are vital steps toward our acquisition of genuine knowledge, by discovering universal definitions of the key concepts governing human life.

Interacting with an arrogantly confident young man in Ευθυφρων (Euthyphro), for example, Socrates systematically refutes the superficial notion of piety (moral rectitude) as doing whatever is pleasing to the gods. Efforts to define morality by reference to any external authority, he argued, inevitably founder in a significant logical dilemma about the origin of the good. Plato’s Απολογημα (Apology) is an account of Socrates’s (unsuccessful) speech in his own defense before the Athenian jury; it includes a detailed description of the motives and goals of philosophical activity as he practiced it, together with a passionate declaration of its value for life. The Κριτων (Crito) reports that during Socrates’s imprisonment he responded to friendly efforts to secure his escape by seriously debating whether or not it would be right for him to do so. He concludes to the contrary that an individual citizen—even when the victim of unjust treatment—can never be justified in refusing to obey the laws of the state.

The Socrates of the Μενων (Meno) tries to determine whether or not virtue can be taught, and this naturally leads to a careful investigation of the nature of virtue itself. Although his direct answer is that virtue is unteachable, Socrates does propose the doctrine of recollection to explain why we nevertheless are in possession of significant knowledge about such matters. Most remarkably, Socrates argues here that knowledge and virtue are so closely related that no human agent ever knowingly does evil: we all invariably do what we believe to be best. Improper conduct, then, can only be a product of our ignorance rather than a symptom of weakness of the will {Gk. ακρασια [akrásia]}. The same view is also defended in the Πρωταγορας (Protagoras), along with the belief that all of the virtues must be cultivated together.