When citing an APA source from your bibliography in the text, the author’s name and publication year are put in parentheses in the normal sentence punctuation. A comma is placed between the name of the author and the date. For the citing of a specific page in the cited publication, p. with the page number following is used. If more than one page is being referred to, use pp. with the referred pages listed afterward.

• Harris is the author and the information came from a book he wrote that was published in 1977. The information was found on page 28. 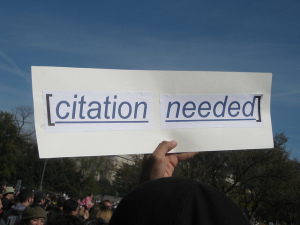 • Harris and three or more others are the authors of the cited information. “et al” is an abbreviation for the Latin phrase, et alii, which means “and others”.

• The information came from a book call the “AKC Dog Book” that was published in 1977.

• If more than one source by the same author published in the same year is used, differentiate the citations as seen in the following example:

• If the Author’s name is incorporated into the sentence written itself, only the year and the page numbers are necessary in the parentheses.